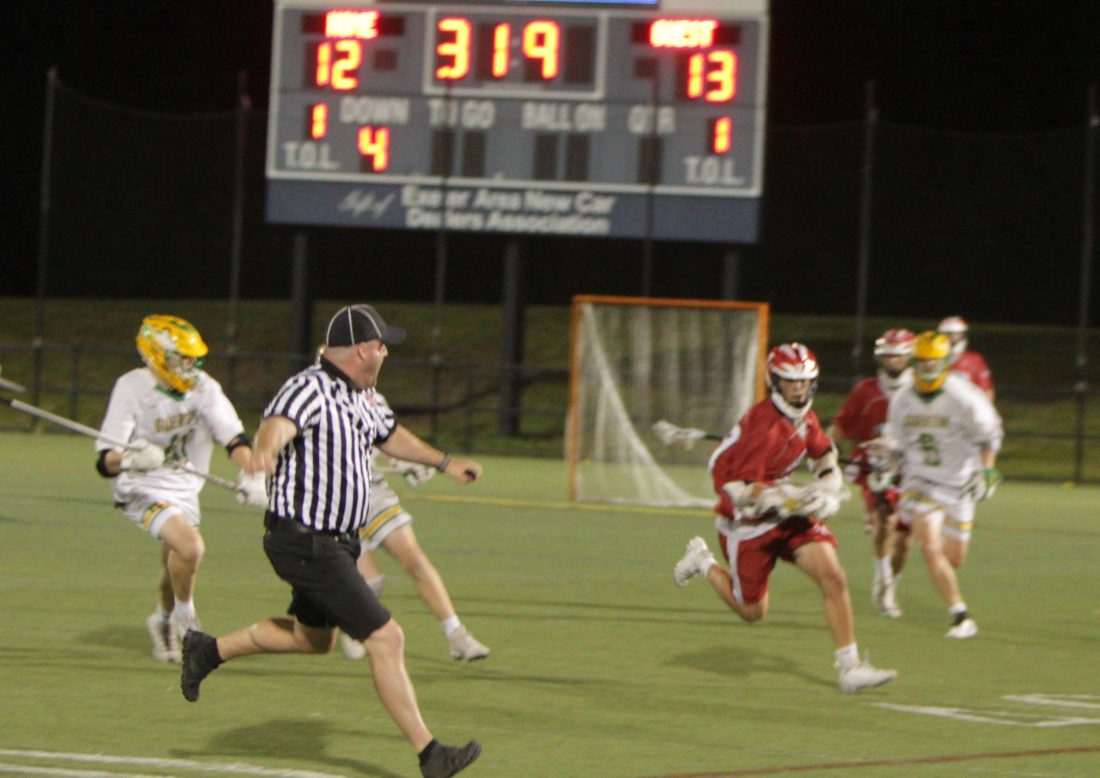 Telegraph photo by HECTOR LONGO Pinkerton's Gennaro Marra scoops up the game-clinching faceoff in the final minute, helping the Astros lock down a 14-12 Division I state championship win on Saturday night.

They make you wait, just about to the end of the high school year.

And they always deliver.

If the 2,000 or so fans, who made the trip to Exeter High on Saturday night can attest, the Division I state final, won by the No. 2-seeded Astros, 14-12, is certainly worth the wait.

Guertin coach Chris Cameron spoke earlier in the week about how the rest of the state is rising up, teams like Exeter and Londonderry. They remain light years away from these two, who have faced off in the last seven state title games.

Facing Granite State foes, not including each other, the Astros and Cardinals own a 460-139 scoring edge combined, and that includes playoffs.

You would expect that kind of dominance to continue, although there is a bit of a variable in that equation.

Rumors are running rampant that the dean of all coaches, Pinkerton’s Brian O’Reilly, might be relinquishing his lax coaching duties.

Cameron went as far as, when asked about O’Reilly stepping down, using the past tense.

“He did it the right way, that’s for sure,” Cameron said. “They were the champs for a while, and we created rivalry that I’ve enjoyed. He got me the last two times.”

You truly have to love these two coaches and the pride they have in what they have built.

When asked if O’Reilly felt like his team was the underdog on Saturday night, he quickly responded, “We were the defending state champs, and we take a lot of pride in that.”

When asked if Cameron thought his team would now be considered the team “chasing,” he fired back, too: “Not with what we have coming back next year, no. Although, I wouldn’t mind having that mentality.”

He pointed to the Astros’ enrollment, and the feeder system entrenched in four different towns.

“They’re not going away,” Cameron said.

Boston Bruins fans might not want to read this note, if you think that high school lacrosse might be translatable to the Stanley Cup Final.

“Maybe they have too many ‘lacrosse players.’ We have athletes,” said O’Reilly. “For us, there is nothing better than football players, playing lacrosse, bringing that toughness to it.”

Sounds an awful lot like the current debate with the Bruins and Blues.

He is a three-sport captain, stud football player, and according to O’Reilly just a super-nice kid.

But Astros senior faceoff specialist Gennaro Marra can take pride in the fact has to at least be considered the most impactful athlete in the state, the best at what he does.

“Probably yes, because of the position he plays,” O’Reilly said. “He’s one of those kids who can give a team an ungodly advantage. He gave us the ball all night long.”

According to O’Reilly, there was talk on the NCAA tournament broadcast of potential rules changes because of the advantage a kid like Marra, who will play at Southern New Hampshire next year, can give a team.

With eight of 10 starters expected back in 2020, including sharpshooters Dawson Clark, Sean Cameron and Ben Abladian plus goalie James Heitmiller, coach Cameron couldn’t help but beam about the potential for next year.

Two holes to fill will be big ones, though.

Siena-bound Chris Kiely and Alex Koutsos, who will head to Bentley, are the major losses.