Cavaliers feel their time is now in Division II finals 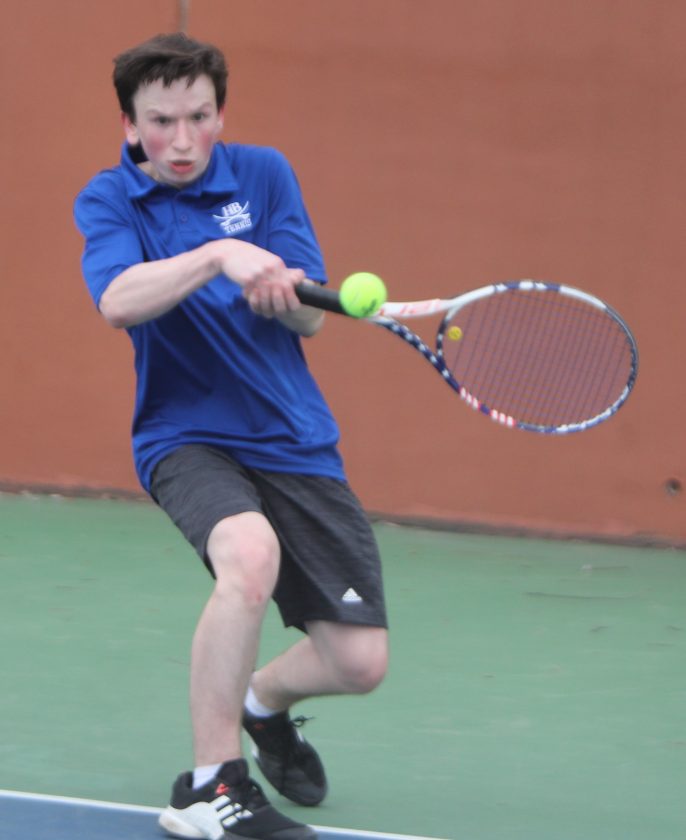 They’ve had a good, young team for the last three seasons now, knocking on that championship door.

Today at the courts at Bedford High School, that door may finally be opened for the Hollis Brookline High School boys tennis team.

Their young nucleus made the semis two seasons ago, and last year fell to Souhegan 7-2 in the Division II finals. Now the Cavs are back, a year older and wiser, and this time are the No.1 seed, 16-0, with a very good No. 2 Portsmouth High School team in their way.

“We’ve been very eager, training for this this whole season, countless practices,” HB No. 2 singles player Darius Paradie said. “So it means a lot to us, for sure.”

“It was such a disappointing finish last year,” HB coach James McCann said, his team now going from underdog to slight favorite. “Souhegan beat us three times last season. … So it’s nice to get back there.”

McCann feels experience and a little more depth makes this team a bit different. They had back-to-back matches on a Friday-Monday in early April vs. two of the other top teams, Portsmouth and Souhegan, and won both, the toughest being a 5-4 win on the road on the seascoast.

“Those were our second and third matches,” McCann said. “Right off the bat they had to play some tough matches, and they showed a lot. Then my concern then was just keeping our focus.”

Meanwhile the No. 2 Clippers (15-1) haven’t lost since that cool Friday in the first week in April, and are clearly capable of winning this thing. They dispatched the Cavaliers’ main rival, Souhegan, 7-2 in last week’s semis.

In that 5-4 match vs. Portsmouth, three were determined by tiebreakers, so this could obviously go either way.

Two were at the No. 1 spots in singles and doubles involving HB’s top player, junior Nic Vahe. He beat the Clippers’ Ryan Porter 9-8 (8-6) after being down 4-1 early and he and David Cherkassky teamed up to beat Jack Madden/Addison Bloom 9-8 (9-7).

“It was a close match, and they have some senior leadership there, too,” McCann said. “Those guys have been going at it for awhile. Their depth and some of their leadership they have (makes it tough).”

And things have changed a bit since then. Cherkassky has been out the last couple of weeks, and McCann has used Cole Lorig at No. 6 with Anghel, Ben Zielinski and Max Burns all moving up a notch on the ladder to Nos. 5, 4 and 3 respectively. Lorig has taken Cherkassky’s spot as Vahe’s doubles partner as well. So the matchups, depending on Cherkassky’s status, could be different.

“He works hard in practice,” McCann said of Lorig. “You’ll see in doubles, he’s not going to hit the blistering shot, but he’s going to keep everything going in play. … At this level of tennis, depth is everything. You can have great top of the lineup, which we do, but then the depth really makes such a difference.”

The Cavaliers have never won a boys tennis title and appeared in their first final ever a year ago. Portsmouth last won the Division II title in 2015, 36 years after back-to-back titles in 1978-79.

“We’ve gotten all the way to this point, undefeated,” Paradie said. “It’d be kind of heartbreaking if we lost in the finals. We have a lot of confidence. We’re prepared in case (the opposition) brings up their level.”

Chasing history, the Cavs will try to bring up theirs as well.