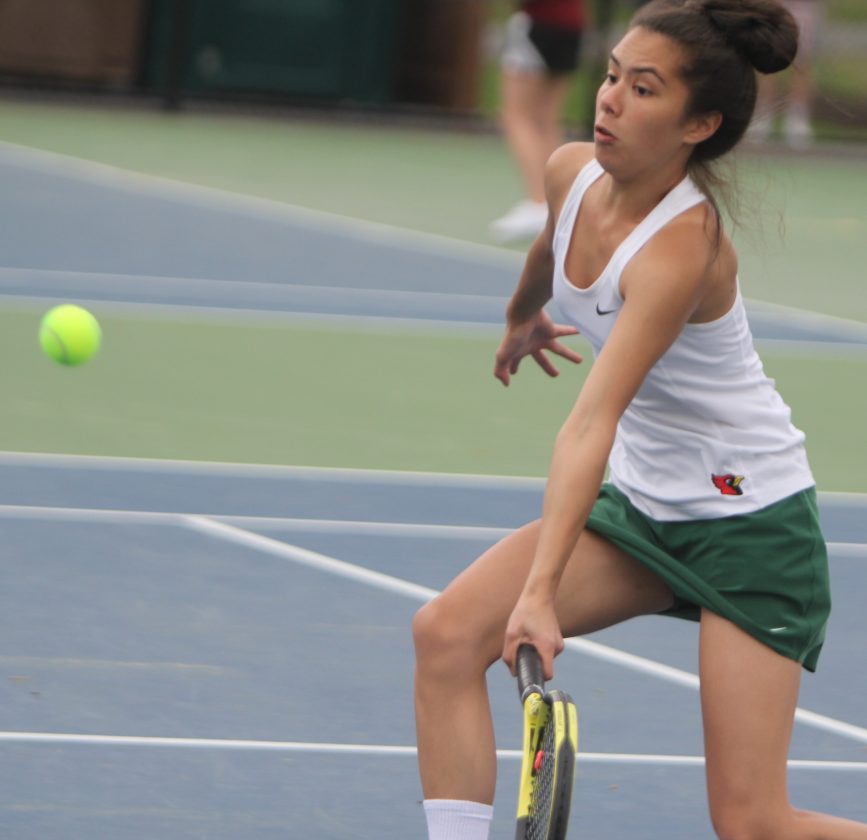 Telegraph photo by TOM KING Bishop Guertin's Katelyn Nichols charges the ball during the Cardinals' 8-1 loss to Derryfield in the Divison I semifinals at SNHU Friday.

HOOKSETT – It had to catch up to them sooner or later.

Yes the Bishop Guertin High School girls tennis players for most of this season were able to overcome the fact they didn’t have top player Claire Reynolds due to a back injury.

But they didn’t play a team like Derryfield much of the year, either. On Friday, the loss of their No. 1 player probably created a domino effect that helped produce an 8-1 loss in the Division I semifinals at the hands of the Cougars at Southern New Hamsphire University.

“We definitely missed Claire today, we felt it,” Cards coach Barry Ndinya, his No. 3, 14-2 team’s quest to get another shot at Bedford in the finals falling short. “But even so, there were three matches that could have gone either way. All three went the other way. It would have been 3-3 or 4-2 us going into doubles.

Instead the Cougars, after BG’s Amy Maalouf made quick 8-3 work of Derryfield’s Abi Leonardi at No. 1 singles, took the next five matches to settle things immediately.

For them it was sweet revenge against a Cardinal team that had beaten them exactly a year ago in the semis in similar fashion, taking five singles matches as well.

“They were all very close,” Cougars coach Gus Moral said, his No. 2, 15-1 team set to take on the only team that beat it, unbeaten defending champ Bedford in Wednesday’s finals. “I think this year it was confidence. Defintely confidence and preparation. They were better prepared this year than last year. And our depth this year was better than last year’s.”

Nichols’ match was the last one in singles, as she represented BG’s last hope after rallying to take a 7-6 lead. But Place broke serve after a very close – and perhaps somewhat controversial — double fault to even things at 7, and the next two games went to Place as well to put the Cougars in the semis.

“She lost a little bit of focus after that,” Ndinya said of Nichols. “I tried to tell her to keep her mind in the game, and play the next point. She almost made it. But she couldn’t hold serve.”

“I think I fought back pretty well,” Nichols said. “It’s disappointing, but I love playing for this team. We’re definitely going to work harder for next year and get back to the finals.

“(Not having Reynolds) was a pretty big factor but we adjusted well and did our best to overcome it.”

Guertin’s bottom of the ladder provided no relief either as Paige Grondin bested Liz Janiak at No. 5 8-4 and BG’s Alex Conceicao fell to Nancy Fortin 8-1 at No. 6. Soon after the Cougars’ Julia Hardy finished off Natalie Gilbertson at No. 4 8-3 and it was up to the Cardinals in the middle courts to keep them alive.

The Cougars swept the relatively meaningless doubles matches the best match being Leonardi/Place edging Maalouf/Gilbertson 9-8 (7-5) at No. 1.

The Guertin ladder loses only Conceicao to graduation, so once again the Cards will try to take advantage of that window their young talent has provided.

And next year, Reynolds should be back.

“It’s state law, she’s not allowed to get injured,” Ndinya said with a grin.