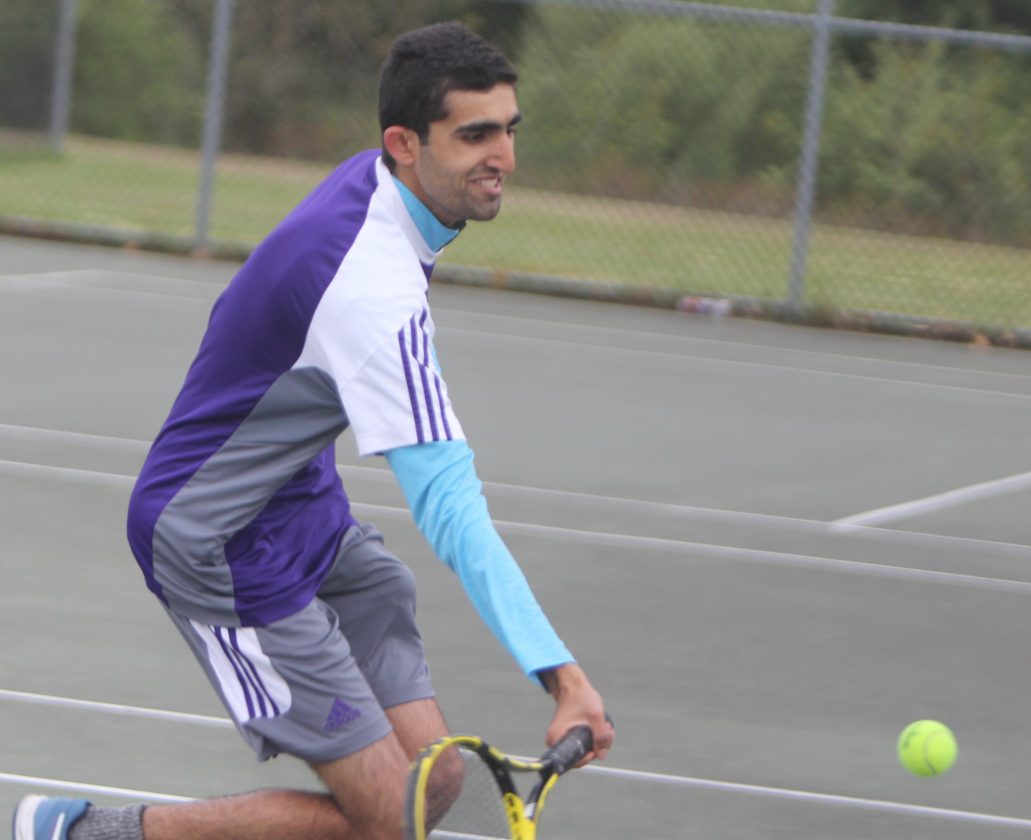 Telegraph photo by TOM KING Nashua South's Amol Khanna knows he's ready to hit a winning drop shot during the Panthers' 8-1 win over rival Nashua North in the Battle of the Bridge Tuesday at South.

NASHUA – They were out with leaf blowers at the Nashua High School South tennis courts Tuesday afternoon, working as hard as they could against Mother Nature to dry the damp pavement.

It worked. Not only did the Panthers get the courts ready and beat Mother Nature, they were able to throttle rival Nashua North as well, 8-1, in the Battle of the Bridge.

South’s goal, at 8-3, is simple. In a Division I dominated by Bedford (and maybe Hanover and Pinkerton), the Panthers want to be able to win a quarterfinal and take their chances from there.

“We have a better team this year,” said South’s No. 1 singles player senior Amol Khanna, who beat North’s Nathan Yeung 8-4. “We have strong players at every single position, which is why we’re doing so well. Even if one or two players lose, we can make up for it with all the other players.”

“That depth and having a doubles game have kept us going.”

And that depth made the difference on Tuesday as North’s only win came at No. 3 doubles when Seth White/Carson Goh beat Suhaas Katikaneni/Sahith Kaki 8-6.

South’s Rohan Kumar topped North’s Stephen Orris at No. 2, 8-4, and Anish Kammila cruised by Zach Rowe 8-0 at No. 3 and Matt Beaudette bested Murray Mahoney 8-1 at No. 4.

To continue the South singles sweep,Katyikameni topped Goh 8-4 at No. 5 and Kaki bested Todd Richardson, 8-2.

Massey talked about the strength of his first two doubles teams, and that came into play as well as the No. 1 Khanna/Kumar tandem blanked Yeung/Norris 8-0, and Kammila/Beaudette earlier had bested Rowe/Mahoney 8-1.

North is now 3-9, and in a different situation. Titans coach Don Gorelick, who a couple of years ago had a roster of 20, is down to 12 this year and graduates three seniors with just one freshman on the roster. His team did what it could Tuesday.

“I do have some concerns,” Gorelick said of the numbers, noting he heard South had 40 try out.

Yeung has been a rock for the Titans and battled Khana. “I was very impressed, I think he did quite well. A lot of patience in tennis and I think our No. 1 and No. 2, Stephen Norris, had a lot of patience today, and that’s what they needed to compete. And they competed well.”

But it didn’t make for a close team match. South’s three losses are to Pinkerton, Concord and Dover. They may see one of the three in a road quarterfinal, and have a key match vs. Alvirne today (the Broncos are in the hunt for a spot) and close out with seemingly winnable matches against Derryfield and Manchester Memorial.

“Unfortunately, we haven’t been able to sneak into the top four,” Massey said.

But that’s OK. Tuesday they got two wins in one day, and one victory led to the other.

South’s win gives the Panthers, who once had a 4-0 lead, a 7-6 edge in the Battle of the Bridge with one more even to go — Saturday’s varsity baseball game, 3 p.m. at Holman Stadium.