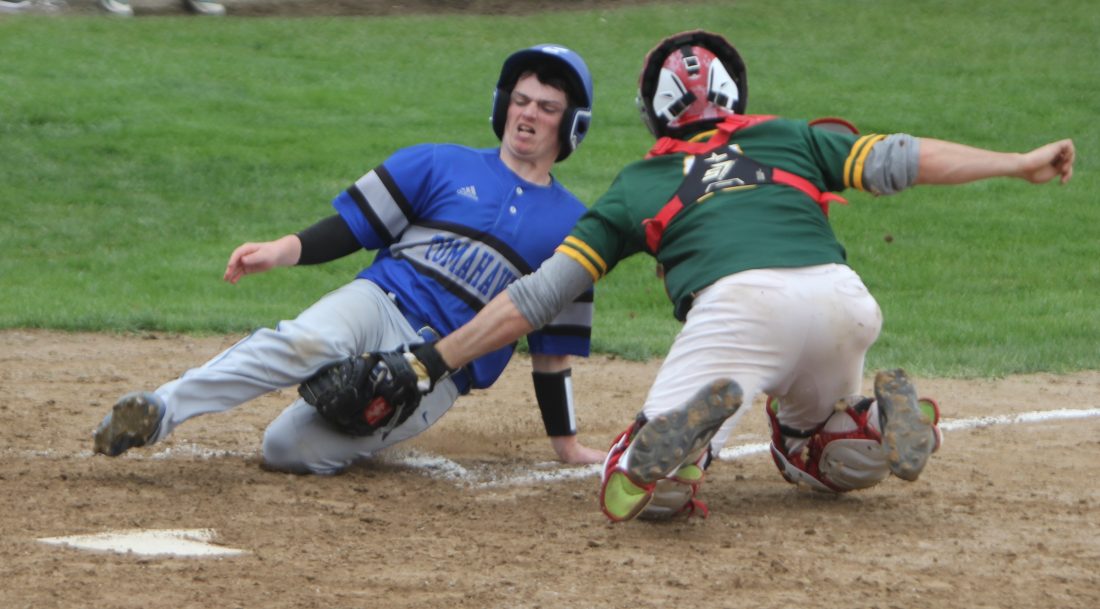 That was the Bishop Guertin High School baseball team’s mentality entering the bottom of the seventh down 3-0 at the hands of the spunky Merrimack Tomahawks.

“That should’ve been our approach in the first and second inning,” Cardinals first baseman Taylor Proulx said. “All about getting to the next guy.

That next guy was Proulx in the final frame, and he delivered with a one-out walkoff hit off the fence in left at Elliott Field with runners at second and third to give the Cards a 4-3 come-from-behind win.

As big of a win it was to keep Guertin unbeaten at 9-0, it had to be crushing for the 2-9 Tomahawks, who are feeling their way under new head coach Kevin Moyer. They were pumped up the entire game and clearly had the Cards on the ropes.

“The energy, the enthusiasm, the mental toughness was all there today,” Moyer said. “Innings one through six, it was our best performance of the year. Trouble is, baseball’s a seven inning game.”

“This was like a game we had earlier this year, that in the last three years we would’ve folded, packed it (in) and lost it,” said Guertin assistant coach T.J. Sheedy, who ran the team for most of the game as head coach Scott Painter had to leave for a wedding. “I think they knew they could do it.”

The ‘Hawks scratched out two runs off Guertin leftyace Brett Anderson. They loaded the bases on two hits and a walk in the third and scratched home a run on Eric Stach’s ground out. They did the same thing in the fourth and Keaton Miller’s RBI single made it 2-0, but there was no big inning as Bobby Bunis was thrown at at home on a dart by Cards center fielder Noah Therrien.

They made it 3-0 in the fifth off BG reliever Brendan Boyce on a wild pitch, that looked like it might just be enough as the Cards looked lethargic against Merrimack starter Jack Goodwin, who was blaking them on four hits through five.

But then the Cards caught what would prove to be a major break. Goodwin got ejected from the game due to his tantrum after being called out on a very close play trying to stretch a double into a triple leading off the sixth.

“No, Jack had everything going for him today,” Boyer said. “That was his game. We would’ve seen how the sixth inning went, but obviously he was dealing. You can’t lose your cool like that. It’s a competitive game, emotions run high, but that can’t happen.”

Reliever Mike Grover pitched out of trouble in the sixth, but issued a walk and hit a batter to start the seventh. Moyer opted for freshman Ayden Curren , and Guertin got three straight RBI hits from Sam Boudreau (3-1), Alex George (3-2), and then Proulx, who saw a 2-2 offering he liked. It made a winner out BG’s third pitcher, Mark McGaughey

“Taylor at the top of the dugout is the first guy, our leader, so we’re going to follow him,” Sheedy said. “He’s our hardest worker. He’s prepared. He knows he’s got to shorten up and has a job to do.”

“Every day in practice during BP we work on two-strike approach,” Proulx said. “You don’t need to crush it. All game long we were getting underneath the ball. It felt good off the bat.”

And even better when he saw George cross the plate. Forget the never; Proulx was in the now and so was Bishop Guertin.