Cavs cruise past Jaguars with an eye on their break 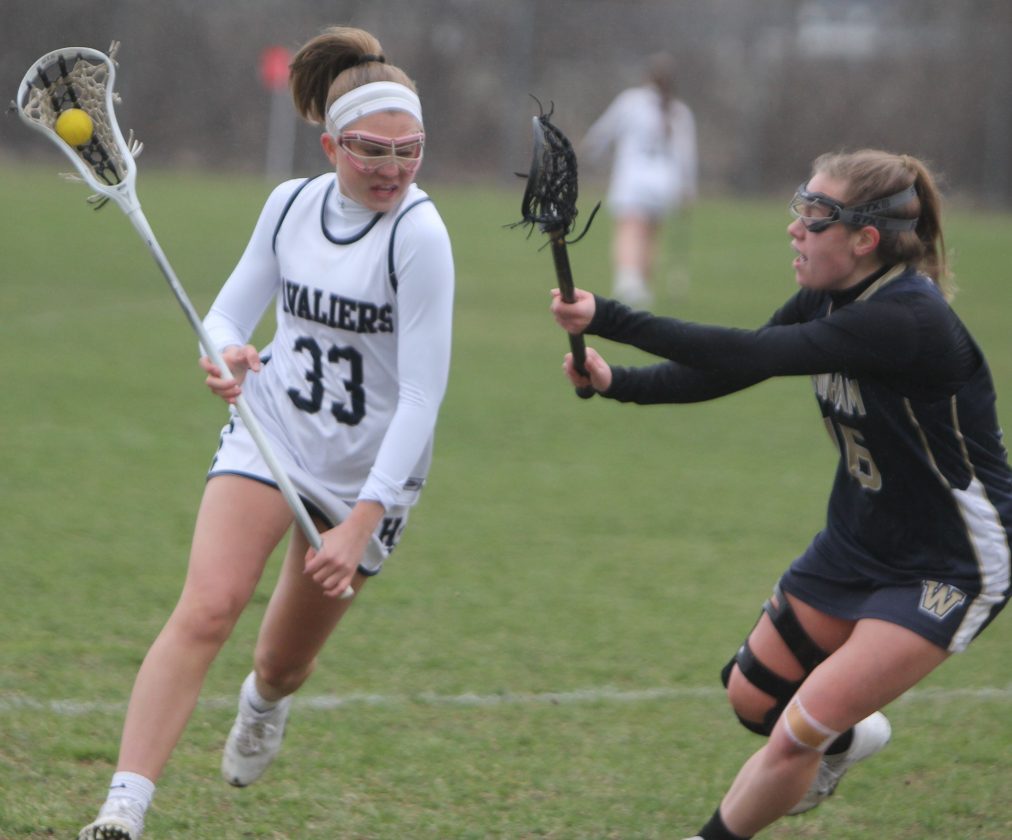 HOLLIS – For the Hollis Brookline High School girls lacrosse team, there’s no time like the present.

That’s because the future after today is a 10-day school vacation layoff. So Thursday’s dominant 14-6 win over rival Windham was huge, and it will be just as important to take care of business today at home against Merrimack Valley.

“This was a huge game,” HB coach Jim Maxwell said of his team’s win that puts the Cavs at 3-0 on the young Division II season. “We played yesterday, we played today,we play tomorrow, it’s a tough three game stretch. … And we need that fourth win (today).”

If they play as well as they did on Thursday, that may not be a problem. The Cavs jumped out to a 5-0 lead in the first 12 minutes and never looked back. As Maxwell said, “The girls came out ready to play today.”

Overall on the day Kelsey Sweeney had five goals and four assists, while Paisley Broadhurst added four to pace the potent Cavalier offense.

“Probably the first 10 or 15 minutes was brutal for us,” Windham coach Maura Ellins said, her team struggling a bit out of the gate at 1-2. “You can’t have the amount of turnovers we have, and take 18 shots and only put in six and call it a win.”

Still, the Cavs led just 6-3 at halftime as the Jags woke up. However, they scored three in the first eight-plus minutes to expand the lead to 9-3 and remained in control the rest of the way. Abbey Magnuszewski, Broadhurst and Sweeney were the scorers.

“Lacrosse is a game of runs,” Ellins said. “If you let them come into the second half scoring three or four goals, it’s going to be a longer second half.”

And it was. Magnuszewski finished with two goals and an assist. Tasha White and Rachel Cerato each had a goal to help spread out the scoring.

“That’s what we go for,” Maxwell said. “We’ve grown as a team this year, so we have a lot more options. Anyone out there has the ability to score. It’s fantastic to have an offense I can throw any seven girls out there and they’re going to get the job done.”

Getting the job done also was Cavs netminder Olivia Valentine, who had 14 saves, including four big ones midway through the second half when the Jags began to apply pressure.

“She’s an amazing goalie, and we’re lucky to have her,” Maxwell said of the senior, who is bound for Delaware Valley University next year.

She had good defense from Caroline Smith and Nicole Heiter in front of her, and could catch some breaks thanks to the all-important 14 of 20 draw controls the Cavs won. Possession is huge in this game.

“This game, a lot of it’s about the draw,” Maxwell said, crediting White for those victories. “It just enables us to do what we want to do on the offensive side.”

And they hope to do that one more time, which would make the bye week even more of a vacation.