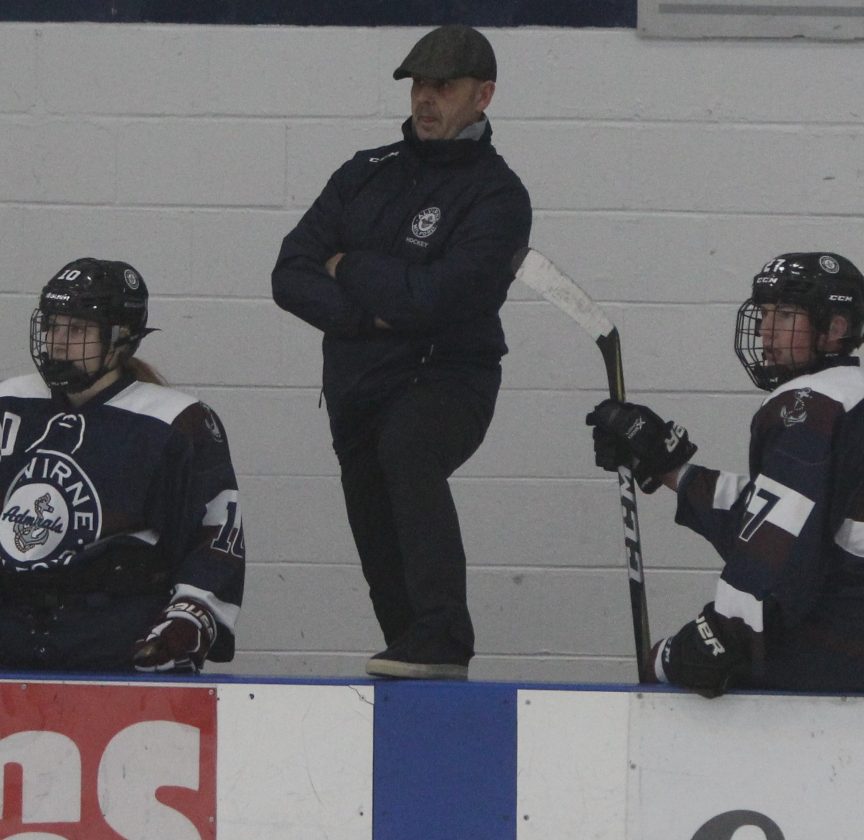 Telegraph photo by TOM KING Matt Simpson, who coached the solo Alvirne team last year and the Alvirne-Milford co-op hockey team this seson has decided to step away from the job for family reasons.

The Admirals will have a new captain steering the ship next season.

The Alvirne-Milford High School co-op hockey team’s coach, Matt Simpson, has stepped down after guiding an Alvirne-based team to its first postseason berth in six seasons.

Simpson was hired two years ago to coach the solo Alvirne team, which finished 4-14 in 2017-18 before co-opping with Milford this season and finishing as the eighth seed at 8-8-2. However, the Admirals fell 4-2 to No. 9 Oyster River in the first round of the Division II tournament.

“Time to move on,” Simpson said in an e-mail to The Telegraph, as he was travelling out west on Tuesday. “It was a personal decision for personal and family reasons.”

Now Alvirne athletic director Karen Bonney and her Milford counterpart, Marc Maurais, will begin their search for a successor.

“As always, it’s disappointing to lose a good coach,” Bonney said. “Life happens. I admire a coach that’s (stepping away) for his family and his wife, those are the choices we sometimes have to make. Coaching for Matt is a passion.”

Alvirne is the so-called “lead school” in the co-op but Bonney said she and Maurais will work together on finding Simpson’s successor.

“Marc and I will start the process in the near future together, soon we’ll post the position and go through all the interviews, etc. together,” Bonney said.

The goal right now is for Alvirne and Milford to find somebody they hope will be a long-term fit. After longtime coach Brian Gould stepped down after the 2015-16 season, Alvirne hockey had co-coaches for one season before Simpson took over. Gould, who coached for seven seasons.

“Absolutely, that’ our goal,” Bonney said. “Even more so for a program like hockey where we’ve had such a high turnover.”

Simpson agreed that the program will need someone who is able to commit to its future.

“As far as program’s future, it will require support from the administration to foster a vision for the future,” he said, “that is committed to the program’s success.”

Maurais, for his input, said he’ll be looking for a coach who can take what was done this year and move it forward, and appreciated the work the Simpson did to make the co-op, a first for Milford, work.

“Speaking for myself, I’m interested in finding somebody who can build upon

the foundation that was set this year,” he said. “To bring together a group of athletes and group of parents to begin creating a close bond is no easy feat, but the groundwork was laid down this year. A person with strong people

skills , be an effective communicator, and create a team first attitude

would make for an ideal candidate.”