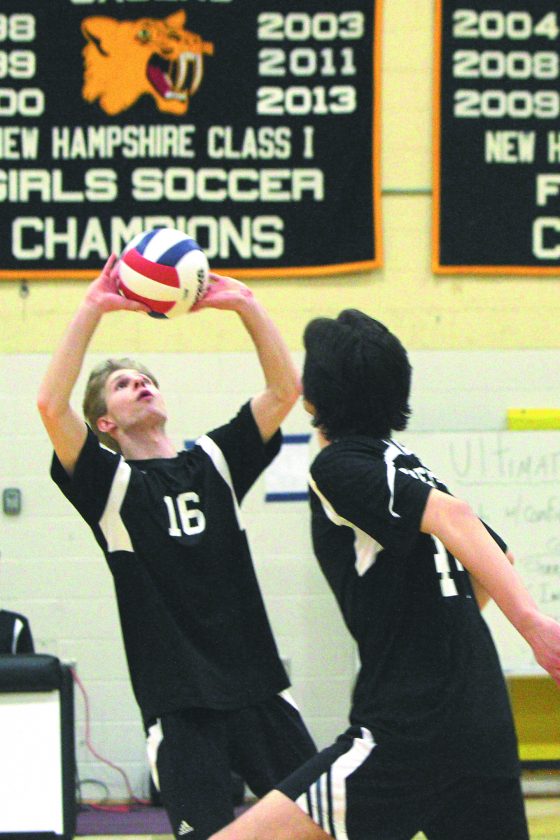 Eli Young and the Souhegan boys volleyball team got off to a fine start with the win on Tuesday.

The Division I runner-up from a year ago shook off a massive hit by graduation and knocked off a solid Bedford squad on its own turf. Ben Abladian led the winners in the opener with five goals and an assist. Sean Cameron flashed his skills with three goals and five assists. Dawson Clark and Michael Kiely each netted a pair, while Alex Koutsos, Joey Lupo, Chris Kiely, Alex Ryan and TJ Quigley all had single goals. James Heitmiller made eight saves, and Matt Burns added three in relief.

Kyle Forsley was strong in goal for Milford, which struggled in the snow. Corey Girouard, Matt Hannon and Gavin Urda paced the Spartan offense, while Alex Taylor and Samson Hodges were strong on defense for Mildoes, which hosts Pelham on Thursday.

The defending state champ Astros crushed the Titans in the season opener for both. North tries again Friday night at Stellos against Keene with a 6 p.m. start.

The Tuesday night snow did not cool off the red-hot Souhegan offense as the Sabers cruised on their home turf in the season opener. Abby Hawkes had five goals and a pair of assists to lead the way, while Savannah Behn chipped in four goals with three assists. Taylor Clark had three goals, while O’Neill Galinson and Clare Woodford has two apiece. Delaney Facques and Margot Manz also scored, while Shannon Hargreaves was called upon for two saves in the shutout.

Nat Coutu had five goals and Maddie Keating added four as the defending state champions rolled in the opener at Stellos Stadium. Emily Santom and Rylee Bouvier scored three goals apiece, while Abby Ahearn delivered two goals and two assists. Lindsay Hult pitched in a goal and an assist for the Cards, who picked up a Kennedy Wright assist as well.

The Sabers were razor sharp in the season-opener, sending the Warriors back to the Seacoast as a 25-23, 25-15, 25-17 victim. Khaled Nazeer paced the winners with 11 kills and three aces. Michael Estabrook added nine kills and an ace. Eli Young dished out 19 assists, and Seth Facey played some serious defense with seven digs and three assists. The Souhegan newcomers all had a say in the win as Jake Aselin (2.5 blocks, 2 kills), Ryan hauser (5 blocks, 1 kill, 3 aces) and Nolan Dodge (4 aces) all were heard from.