Cavaliers get their revenge with 6-3 win over Sabers 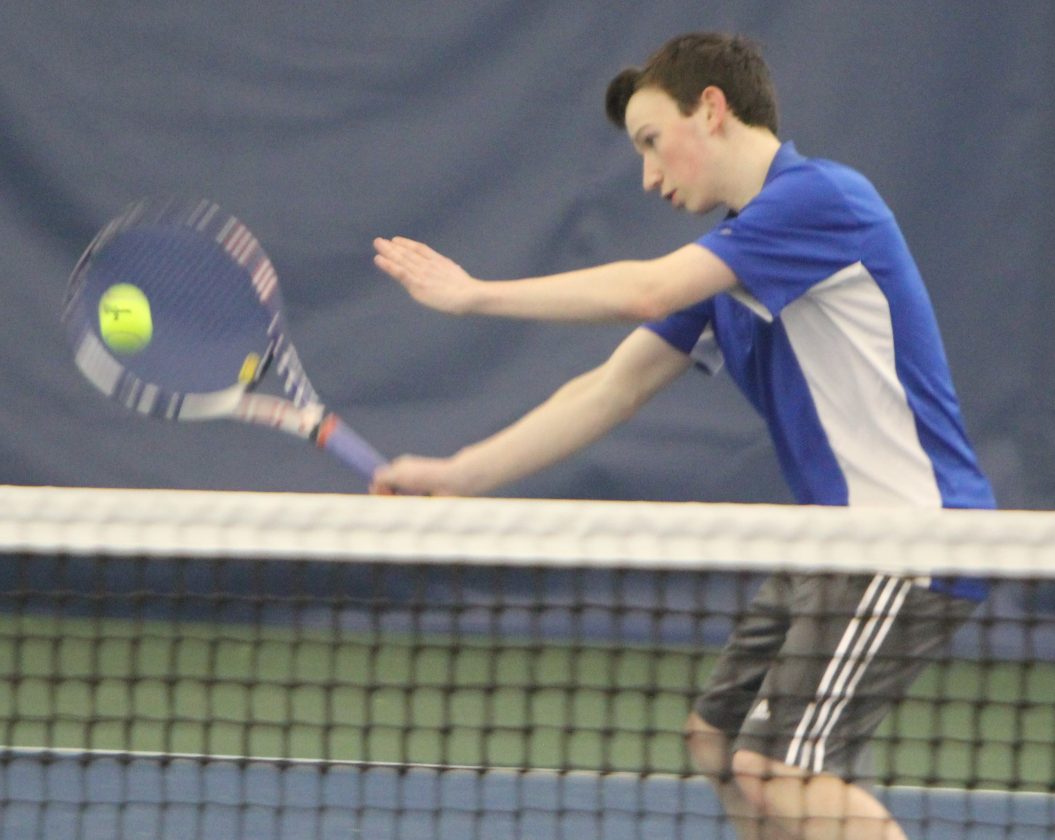 Telegraph photo by TOM KING Hollis Brookline's Darius Paradie keeps his eyes on the prize during his No. 2 singles match Monday vs. Souhegan, as the Cavaliers prevailed on the day, 6-3 at Longfellow Tennis Club in Nashua.

NASHUA – The loud roar Monday from the second floor overlooking the indoor courts at the newly renovated Longfellow Tennis Club told you all you needed to know.

It told you that the Hollis Brookline High School boys tennis team had waited 10 months for that moment.

HB’s No. 4 singles player Max Burns had just flipped the scorecard to show a 7-4 lead over Souhegan’s Josh Lacaillade, and that meant he was moments away from the clinching point in a 6-3 Cavalier win. Remember, the Cavs lost three times to their local rivals last year – 5-4 and 6-3 in the regular season, and then 7-2 in the Division II finals.

“It just meant everything to us,” said Cavs’ No. 2 singles player Darius Paradie, whose win started the streak of five straight singles wins to clinch the match. “We worked so hard to get to this point.”

That point is supplanting the Sabers as the early season favorite for the Division II title. They survived a 5-4 win over another contender, Portsmouth, just four days ago, and now the 3-0 Cavs can take a breath.

“It’s big,” Cavs coach Jim McCann said. “We lost to them last year three in a row. You start the season going 2-0 against Portsmouth and Souhegan in the second and third matches, is big. There may be other competition out there, you never know. But these are the two teams we knew we had to beat.”

“Two teams brought everybody back, Portsmouth and Hollis, which is where we were last year,” Sabers coach John Kilgore said, his team now 2-1 after going unscathed last season, “so they’re comfortable. We’re working two people into the lineup. … We’ll sort some things out by the end of the year.”

One thing Kilgore doesn’t have to sort out is his No. 1, where junior Sam Goddard looks almost dominant, stepping into the spot vacated by the graduated state singles champion Matt Lapsley. Goddard helped account for two of the Sabers’ three team points in besting HB’s Nic Vahe, 8-2, and then teaming up with for another 8-2 win over Vahe/Paradie at No. 1 doubles.

“Number One is solid again this year, and he makes the doubles solid as well, just like Matt did,”Kilgore said. “He just plays a lot of tennis. … Just a lot of court time. He’s a meticulous person, takes care of detail, and he’s been taking care of the detail of his game, and it all is just flowing out.”

The Sabers though were a bit shorthanded on Monday, as Goddard’s younger brother, regular No. 3 singles player freshman Josh, was out with an arm injury. Thus everyone moved up from three through six, and after Paradie’s 8-1 win over Saber Kyle Gibson at No. 2, it was all HB the rest of the singles way.

HB’s David Cherkassky handled Michael Dodge at No. 3, 8-3, and Ben Zielinski’s 8-1 win at No. 5 over Saber Nick Marinelli as well as Alex Anghel’s 8-3.Triumph over Evan Loconto set up Burns for his clinching heroics.

“It may have been three points in the match,” Kilgore said. “But I don’t have any problem with today, we were competitive in three matches in singles.”

And with the match already decided, the Sabers took two doubles matches to make the final respectable, the other being Dodge/Lacaillade’s 8-5 win at No. 2 over Cherkassky/Anghel. The Cavs won at No. 3, Burns/Zielinski topping Loconto/James Zeolie, 8-2.

“All the guys are playing well,” McCann said. “It’s early in the season, but we’ve played a fair amount of tennis outdoors and indoors. We knew we had to get ready for these two matches. They’re doing well, they’re on schedule.”

A schedule that could take them where?

“I think we can win it all,” Paradie said. “We have the potential to do that.”

That would bring an even louder roar.