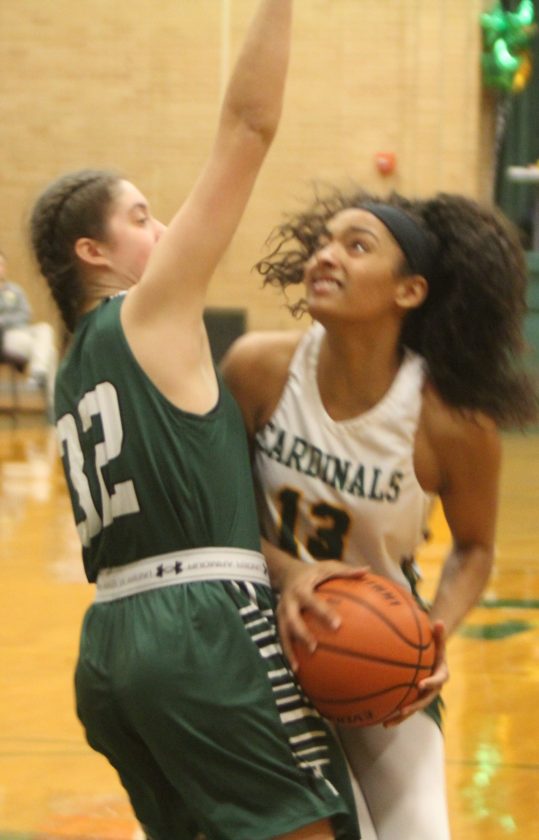 The Bishop Guertin High School girls basketball team went through its 2018-19 championship season without a blemish.

That’s not the case in the off-season that has just begun.

Two key players on the Cardinals, junior forwards Aaliyah Forman and Ava Owens, have announced via social media that they are transfering to St. Andrews School in Barrington, R.I. Both are going to be repeating their junior years.

“I’m happy to announce that I will be attending St. Andrews and reclassifying to the class of 2021 to finish off my high school years,” said Forman in a twitter post. “I want to thank everyone at BG who has helped me through my years, especially Coach Brad (Kreick) and my teammates! Excited to start this new journey (fingers crossed emoji).”

Owens, meanwhile, stated on twitter “Happy to announce that I will be fnishing out high school and reclassifying to the class of 2021 at St. Andrews. Thank you to everyone who has supported me along the way.”

By “reclassifying”, one might conclude that the moves have been made to enhance both players’ academics to prepare for moving on to the collegiate level. The 5-7 Forman just recently received an offer from UMass-Lowell as well as three other Division I schools – the University of New Hampshire, University of Rhode Island. Also, the 5-7 Owens was said to have had Division I schools interested as well. Forman averaged seven points but 5.5 rebounds with her long, athletic style, and Owens contributed nine points a game with 3.5 rebounds. Both would either start or come off the bench, depending on matchups.

“It’s a bummer,” Cards coach Brad Kreick said, “and we’ll miss them both. But I love the kids we have coming back.

“I would not trade places with anybody going forward with the group we have coming back. … We’re excited about the incoming freshman class and the young players we already have in the program.”

There were whispers during the Division I tournament that some Guertin players might be interested in moving on to prep school for various reasons, likely not completely basketball related. Remember, had Owens and Forman opted to repeat an academic high school year, they would only have one year of NHIAA basketball eligibility remaining regardless. They will be able to play two years St. Andrews.

“They made the decision in the best interet of their futures to go to prep school and repeat their junior years,” Kreick said. “I think so highly of both kids, and wish them nothing but the best.