Guertin has a mission in mind in girls tennis 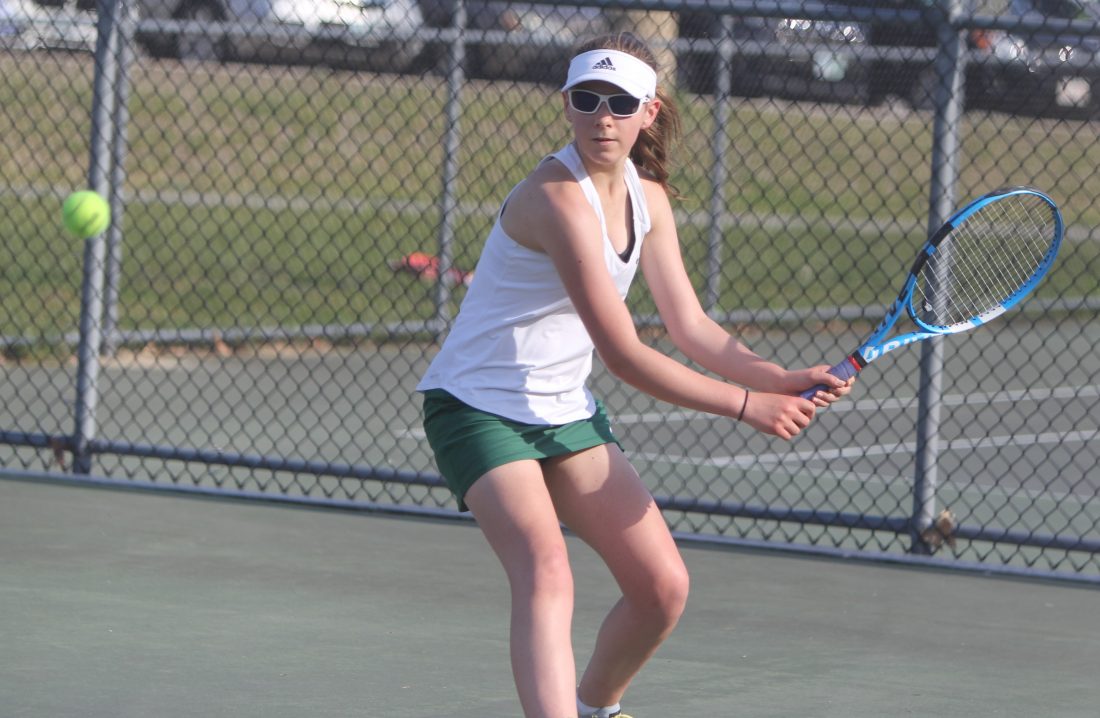 Telegraph file photo by TOM KING Bishop Guertin junior Claire Reynolds is back to try to help the Cards return to the Division I finals this spring.

The memory of that tough loss nearly 10 months ago still lingers in the minds of the Bishop Guertin High School girls tennis team.

And they want to erase it for good.

They were thrashed by Bedford in the Division I finals at Pinkerton Academy back in early June, and with both teams being young, it’s likely they could meet again in that same scenario.

And they know it.

“Absolutely,” said Cardinals head coach Barry Ndinya, who has one of the state’s best atop his ladder in junior Claire Reynolds, and everyone else from that group returning. “They’ve been talking about the finals, and they’ve been using that as motivation all off-season. They are talking about playing for a championship.”

Ndinya feels that his young ladder is indeed improved.

“They’ve all gotten a little stronger, better mechanics, their technique has improved as well,” he said. “They’ve all played a lot of tennis.”

Exeter and Derryfield are also expected to be strong. Meanwhile, knocking on the door locally are the Panthers from Nashua South. They gave Guertin a battle in some individual matches in their quarterfinals loss, and are looking to make the next step from an 11-3 regular season. Depth may help them do that, as head coach Charles Gray admitted “Our top six could change quite a bit throughout the season.”

Nashua North, Alvirne and Merrimack are looking to improve from non-tournament seasons. It may be tougher for the Titans, who lost a couple of key players. albeit from a 1-13 team, and are rebuilding. The Broncos have four of six ladder spots filled by returnees, and Merrimack has a touted freshman in Liann “Shu” Grosso, “and her experience on the court benefits all the girls,” Tomahawks coach Sue Cloutier said.

In Division II, Milford had a very successful season last year, and are returning three regulars from a team that went 12-4 and went as far as the semifinals but lost to Portsmouth. The Clippers, Windham and Hanover have dominated the division the last few years.

Hollis Brookline has several back from a 5-9 team, and remember, the Cavs play their home matches indoors at Longfellow Tennis and Swim in Nashua. So it’s always a transition for outdoor matches on the road.

“The key to our success is getting outdoor play time,” Cavs coach Marie Salamone said, “so we can be competitive both outdoors and indoors.”

The Spartans have been doing the same thing, working out at Hampshire Hills indoors before heading out. “We’re grateful,” McManus said.

At Wilton-Lyndeborough, longtime coach Betsie Sullivan stepped down after 26 years to spend more time with her family. Former Warriors boys coach Fran Bujak has taken over a team with just three returnees, but several freshmen which bodes well for the future.

Things start on Monday with Milford at Windham and Souhegan hosting ConVal. The rest of the teams open up Wednesday or Friday.

Here’s a capsule look at the local teams:

LAST SEASON: Did not qualify for tourney.

COACH’S COMMENTS: “We’re looking forward to a great season,” Ruigrok said. “With four of the six top returning players, we should be a tough match against all opponents.”

COACH’S COMMENTS: “A lot of the players worked hard in the off-season,” Ndinya said. “We should have a lot of improvement from last year.”

LAST SEASON: Did not qualify for tourney.

COACH’S COMMENTS: “The girls look forward to playing doubles,” Cloutier said. “(Grosso) comes to Merrimack bringing competitive skills and her experience on the court benefits all the girls.”

LAST SEASON: 1-13, did not qualify for tournament.

COACH’S COMMENTS: “We lost two strong starters from last year and face some strong teams,” Viens said, “so I hope the team grows this season.”

COACH’S COMMENTS: “This team seems to have more depth than in recent years,” Gray said. “I’m hopeful that the players will push each other to get better.”

LAST SEASON: 5-9, did not qualify for tournament.

COACH’S COMMENTS: “We’re still a young team,” Salamone said. “All the players worked hard in the off season and are excited to be together again this season.”

COACH’S COMMENTS: “We lost some key players from last year,” McNanus said, “but gained some talent, so it’s tough to say, but we should be competitive.”

LAST SEASON: 6-8, did not qualify for tournement.

COACH’S COMMENTS: “We will be competitive,” Dean said. “And with with a little luck, maybe playoffs.”

LAST YEAR: Did not qualify for tournament.

COACH’S COMMENTS: “We’ll field a young and promising team,” Bujak said. “In addition to the returning players, which include a freshman, we’re adding a junior and four freshment. The five freshmen provide a solid core for many years to come.”