Cards have hurdle in Portsmouth for fourth straight title 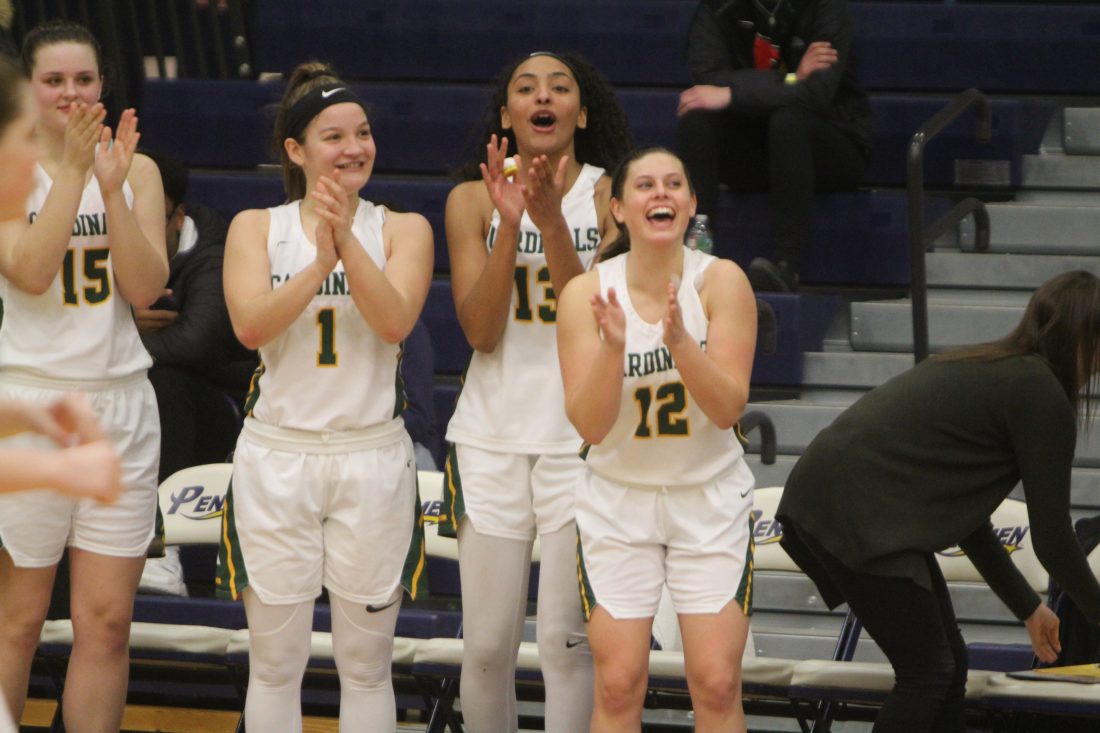 But all that won’t mean a thing for the Bishop Guertin High School girls basketball team unless they get some hardware for the fourth straight season today at 4 p.m. at Southern New Hampshire University.

To earn their fourth straight title, the No. 1, 20-0 Cards (23-0 overall) will need to repeat a win over an upstart No. 6 16-5 Portsmouth Clippers team that gave them their toughest game of the year just a couple of weeks ago in the final week of the regular season.

“They’re peaking at the right time for sure,” Cards coach Brad Kreick said of the Clippers. ” They gave us everything we could handle and more when we were up at their place two weeks ago.”

The Cardinals will be looking to have the longest Division I/Class L title streak of a local team since the one Nashua High School won five straight championships from 1985-1989. Winnacunnet had a five-year run from 2007-2011, snapped with Guertin’s only other basketball crown in 2012.

This is Portsmouth’s first year back in Division I after a Division II run that saw them make the finals in 2013 but lose to Lebanon. The Clippers also lost to Nashua in the 2000 Class L title game.

In the first meeting at Portsmouth on Feb. 19, Guertin was up 34-24 at halftime but managed just five points in the third quarter after Portsmouth switched to a 2-3 zone to clog the middle and prevent the Cards’ patented dribble penetration. Guertin was down 48-43 with 1:53 to play before Aaliyah Forman hit a 3-pointer and then got a steal and a layup to tie the game at48. It stayed that way into OT when BG outscored the Clippers 13-3.

That game seemed to ignite a feeling in the Clippers that they were contenders, and that’s been proven true as they beat Merrimack in the first round, upset Bedford on the road and then knocked off No. 2 Pinkerton 43-41 the other night in a semifinal they sent to overtime with a 3-pointer by Brittany Graham with 2.5 seconds left.

“This was like BG in the regular season all over again,” Hopley said of the semifinal win, adding that for the finals“Nobody’s expecting people to knock these guys (the Cards) off. We’ll take a swing at them on Saturday and see what happens.”

Kreick, whose team is led in scoring by juniors Erin Carney and Addison Smith – Smith has scored 40 points combined in BG’s two tourney games – is definitely wary of the Clippers. Portsmouth hase height in 6-1 senior Abbie Laurence and 6-1 junior Corrine Lamond that the Cards really haven’t had to contend with vs. anyone else in Division I. They also have a tough point guard in 5-4 senior Arianna Hebert that Kreick calls “the real deal.”

“Look, that’s a very good basketball team,” he said. “They’re a senior-laden team, nothing fazes them. You watch them, they’ve got great poise, you say ‘Wow, they’re such a poised team, they don’t beat themselves.’ And then you say, ‘Wow, they’re big.’

“It’s a great matchup because it’s a total contrast in styles. They want to play in the half court, play a bunch of zone, pound the ball down on the block. You’ve seen us, we like to get up and down the floor. It will be an interesting matchup style-wise, and we’ll see who can kind of dictate tempo.”

The Cards are looking forward to the opportunity.

“Very much so,” Smith said. “Very excited to play Portsmouth. It’ll be a real good game. It’ll be fun to go back and play them after we played them the last time.”