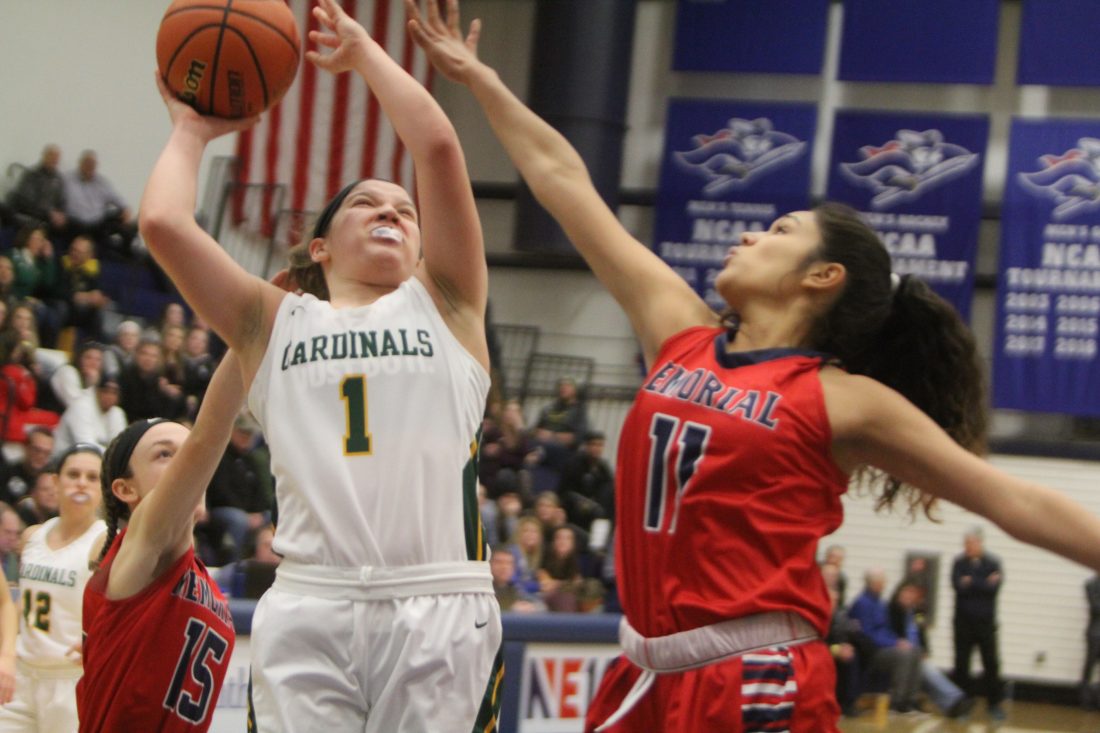 MANCHESTER – They now need just one to get four.

The Bishop Guertin High School girls basketball team dispatched No. 4 Manchester Memorial, 66-36 on Thursday night in the Division I semifinals at Southern New Hampshire Univerity. Now they have just one win to go in order to get their fourpeat, as in fourth straight state title.

“The kids just did a nice job,” Guertin coach Brad Kreick said. “This is our fourth year, and our formula really hasn’t changed that much. You’ve just got to trust the kids. …A total team effort.”

For the second straight tourney game, 5-10 junior Addison Smith was a force offensively, following up her 19-point quarterfinal effort with 21 points, 13 in the key first half, including a 3-pointer just before the buzzer for a 33-19 halftime lead. And defensively, the Cards held Memorial standout Lyric Grumblatt to three points.

But getting that last win won’t be easy for the 20-0 Cards (23-0 overall). That’s because they will face, perhaps fittingly so, the team that gave Guertin the most trouble of any team they faced all year, the No. 6 Portsmouth Clippers, Saturday at 4 p.m. at SNHU. The Clips took BG to OT during the regular season before the Cards prevailed 61-51, and they edged Pinkerton in OT last night, 43-41 in the other semi.

“It’s going to be a war,” Kreick said. “We had an unbelievable battle two weeks ago at their place.”

But this one was not much of a battle after the first eight minutes. Memorial (15-5) started the game strong, leading 3-0 and tying the game 9-9. But the Cards went on a 7-2 run to end the opening quarter up 16-11, and never lost the lead.

“It was tempo,” Kreick said, as Guertin’s pressure caused 17 Crusader turnovers overall. “We continued to have the game speed up a little bit. And we hit a couple of shots, that kind of opened it up a little bit.”

“They’re obviously gifted at pretty much every position,” Memorial coach Greg Cotreau said of BG. “I think our kids fought extremely hard. …I thinktheir man-to-man pressure got us out of sorts a bit. We worked on our offense for four days, running it with pressure in our face with multiple kids, but it’s impossible to try to mimic that in practice.”

They forged ahead in the second quarter, paced by Smith who came off the bench just a couple of minutes into the game.

“She’s been fantastic the second half of the year for us,” Kreick said. “You look at the stats, she’s our second leading scorer and leading rebounder. She’s been dynamite.”

“It was a team effort,” Smith said. “Last year I was out for two months with my ankle injury and this year I’m ready to go.”

And the Cards were definitely ready to go, when, as a No. 1 seed should, they kept their foot on the gas with a 6-0 run to start the third up 39-19. A Hannah Muchemore 3-pointer gave the Cards a 42-21 with 4:15 left in the period. She finished with 14 points while Ava Owens added 10. Jennessa Brunette led Memorial with 10. Guertin out-rebounded Memorial 33-24.

Erin Carney’s buzzer beating follow of her own miss gave BG a 49-26 cushion entering the final quarter. But just as impressive as BG’s offense and ball movement were, the job of shutting down Grumblatt was off the charts.

“We have the luxury of an Aaliyah Forman,” Kreick said. “She’s a 5-11 kid who can guard one through five. We told her early in the week ‘You’re going to guard Lyric’, and Aaliyah just stepped up to the challenge, she was dynamite all game long.”

“I think it’s going to be a great final,” he said. “Two pretty evenly matched teams.”

With one of them seeking to get No. Four on the floor.

The first semi went to OT thanks to Portsmouth guard Brittany Graham’s 3-pointer with 2.5 seconds left. Portsmouth’s Arianna Hebert hit a layup with 3:02 left to make it 43-41 and that was it for the scoring in the extra session.