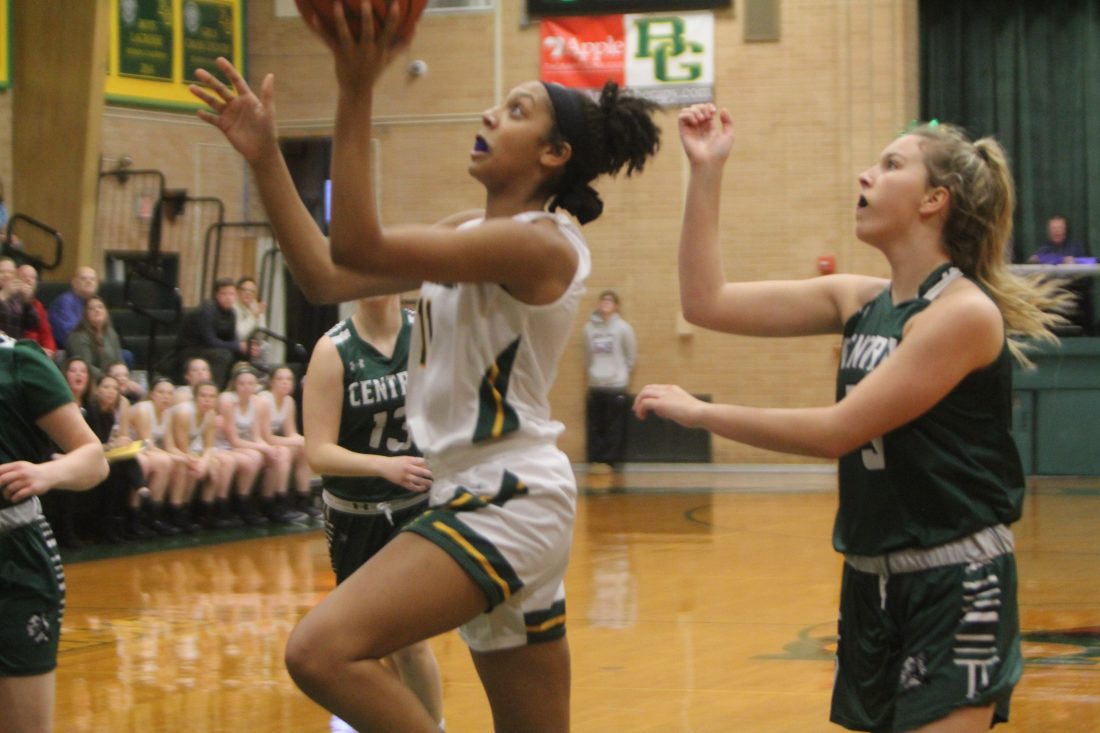 NASHUA – That first tournament game is the one coaches worry about the most.

Thus, it likely won’t take Bishop Guertin High School girls basketball coach Brad Kreick long to find something to use as a teaching tool for his top seeded team from Saturday’s 51-29 rout Division I quarterfinal win over No. 8 Manchester Central.

Through five-plus minutes of the third quarter, the Cards (19-0) had just three points. But Kreick isn’t too concerned. His team was up 33-11 at the time and defensively pitching a shutout.

“We’re at the time of year when you just want to win and move on,” Kreick said. “We actually played a pretty good first half. With nine days off, you could tell they were ready to go. In the third quarter we were kind of out of synch, out of our rhythm. But that’s a good (Central, 12-8) team. They’re very, very tough, physically tough, especially on the defensive side of the floor. We weren’t able to get out in transition in the third quarter.”

The Cards will certainly look to be in transition on Thursday in the Division I semifinals on the bigger Southern New Hampshire University floor, against No. 4 Manchester Memorial, which beat Londonderry 58-39 Saturday night in their quarterfinal. It will likely be a different type of matchup than the one they just saw.

“I’ll always say, we may not be necessarily as talented as a lot of teams, but we’re not going to get outworked,” Central coach Mike Wenners said. “Even today we didn’t get outworked. We just played a team that’s one of the best teams in New England, so that’s going to happen.

“It is what it is, we probably missed a lot of shots that we needed. But when you play a team like that, a missed layup is magnified.”

The Cards soard to a layup-filled 13-2 first quarter lead, and the layup drills continued en route to a 30-11 halftime lead. The offense was a thing of beauty, with Erin Carney hitting a key off-balance shot and the Cards having a highlight three-touch layup from Hannah Muchmore-to-Aaliyah Forman-to-Addison Smith. Smith had an outstanding game, leading all scorers with 19 points. Central was led by Destiny Jordan’s nine.

“I think because we hadn’t played in so long (nine days) we were ready to get out and run again,” said Carney, who had 13 points. “We hadn’t played in nine days, so we just came out and were firing everywhere.”

Kreick was glad to see what Smith, a six-foot junior, did.

“Smith played great tonight,” he said. “She hit a bunch of shots. She was fantastic. That kid can score. She can play on the post, and step out and hit the 3.”

“She’s been like that for three years, since she came on campus,” he said. “The kid’s not afraid of anything.”

Despite the ragged third period, Guertin was still up 41-17.

“We’re fine,” Kreick said. “I’ve been in enough playoff games now to know it’s rarely pretty. You get the first one out from under you, kids get their legs out from under them and you kind of get into a rhythm. … We’re heading back to SNHU, and I’m very proud of that.”

“I feel like we settled a lot in the third quarter,” Carney said. “We had a lead and we were all right with it. We slowed down, which we shouldn’t have. We needed to keep going and keep pushing.”

You can count on the Cards doing just that on Thursday.