Big dose of Balsamo gets Cavs to quarterfinals 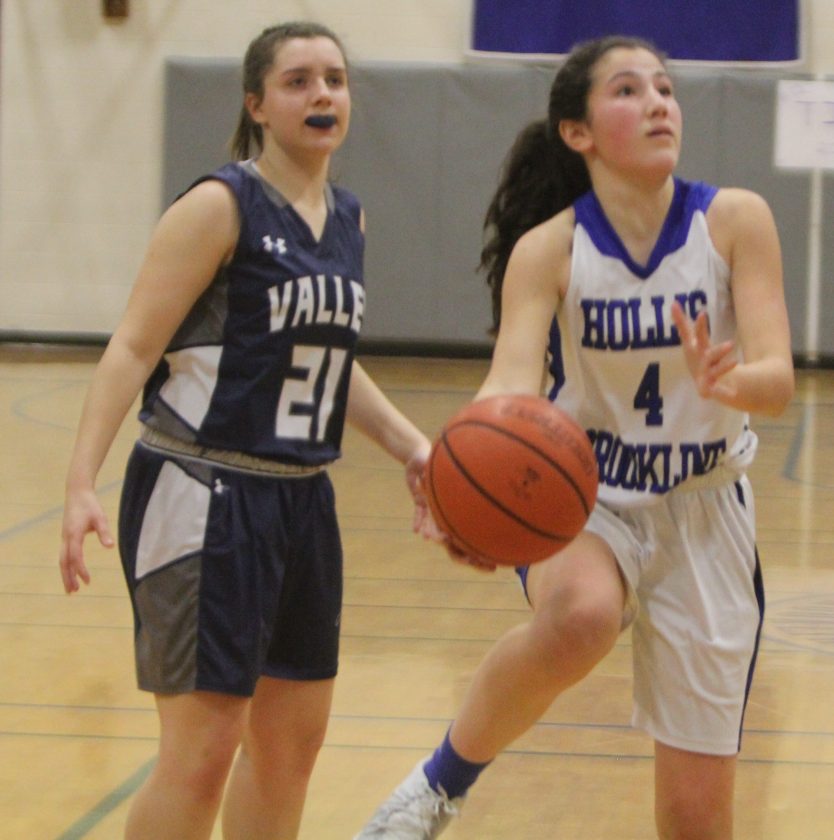 HOLLIS – The recipe for tournament success was tasting a little flat early on for the Hollis Brookline High School girls basketball team on Tuesday night.

It needed a good dose of Balsamo vinegar.

As in Christina Balsamo. Presto, the Cavaliers junior point guard took the game over late in the second quarter and ended up with 25 points as her defending champion team coasted to a 60-36 Division II preliminary round win over a scrappy No. 9 Merrimack Valley squad.

Hollis will now take on top seed Hanover on the road in Friday’s quarterfinals.

“I was just looking to be aggressive,” Balsamo said. “We knew they’d be a scrappy team. I just wanted to drive, be aggressive, get them in as much foul trouble as I could.”

It was 12-12 and the Cavaliers were struggling to score points, as the game was the way the Pride (11-8) wanted it to be – helter skelter.

“She started taking the ball to the basket on fast breaks,” HB coach Bob Murphy said. “But you got it. She’s smart, she’s also quick, she knows the game of basketball and she’s real fun to watch and great to have as a point guard. … She makes everybody else looks good.”

Including Cavs senior center Liz Atkinson, who overcame early foul trouble to score 15 points, all in the second half. She goes out a winner after her final home game.

“Her best game of the season,” Murphy said. “She got in quick foul trouble.”

“It feels weird to realize it’s the last time (at home),” Atkinson said. “It hasn’t hit me yet. But I’m excited for the next game. It’s going to be a tough one, but I think it’s going to be good.”

“Balsamo does her thing, Atkinson does her thing, the next thing you know, seven (point deficit) goes to 15, and you start to lose that confidence,” Merrimack Valley coach Bob McNutt said. “They’re tough. … They’ll definitely make a run.”

The other key was the Cavs’ switched to a 2-3 zone that made life difficult for the offensively challenged Pride. HB held MV standout Carly Huckins to 10 points.

Mackenzie McDonald led the Pride with 14 while Amanda Goclowski added seven for the Cavs.

“I didn’t think it was going to work on these guys,” Murphy said, “but I’m glad it did.”

“We struggled a little bit with the zone,” McNutt said, “because we don’t really have any inside presence.”

And now it’s off to the Upper Valley on Friday. Murphy really wanted the rematch, after the 17-1 Marauders beat his team here 70-54 last month in a game that was closer than the final score indicated.

“If there’s any one team I’d want to go play right now, it’s Hanover,” Murphy said. “That was probably the best game we had all season.”

They’ll need a better one on Friday, and another huge dose of Balsamo vinegar.