Cards romp over Wamps in battle of champions 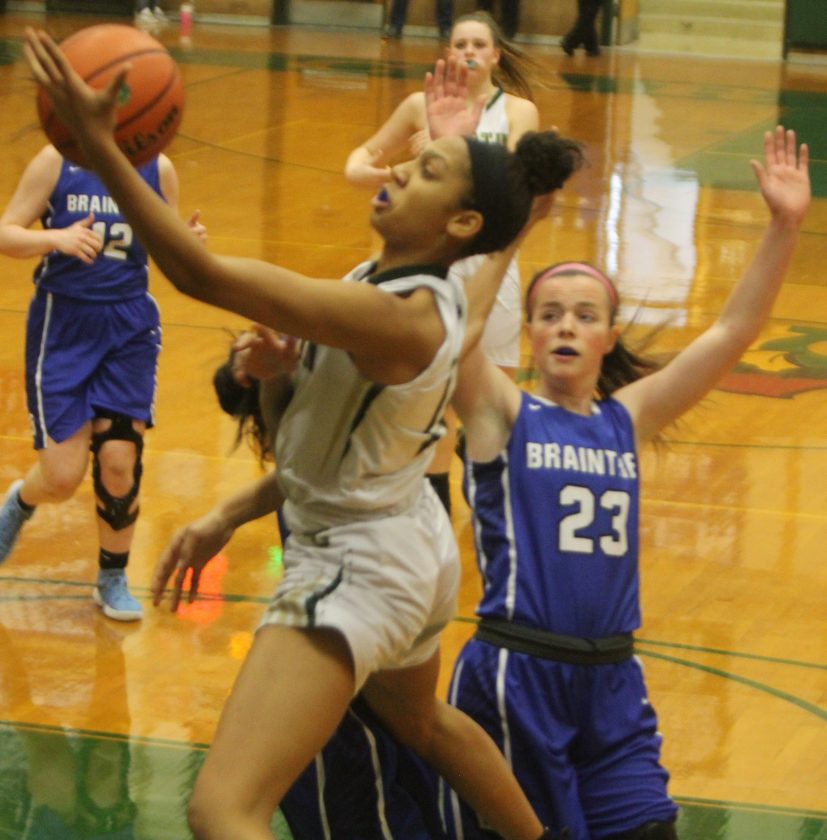 NASHUA – There have been games this season when his team has won handily that Bishop Guertin High School girls basketball coach Brad Kreick has worn a frown.

Sunday’s 68-43 win over Massachusetts power Braintree at the Colligadome was not one of them.

“How could you not be happy with that performance,” Kreick said after the Cards dominated throughout in their final home regular season game. “I thought the kids were, from start to finish dialed in pretty good, played a very solid game, did everything we asked them to do, and just executed really well against a very, very good basketball team. Hard to nitpick about that game.”

With that win, the Cards not only improved to 17-0 overall, 14-0 in Division I, but also have beaten three tough out-of-state opponents (including Mercy of Connecticut and Syracuse’s Jamesville-Dewitt. They now hit the road for four games, including one more out of stater at Bishop Feehan in Attleboro, Mass. Friday before the real prize, the Divison I tournament, begins in just over two weeks.

This was a highly anticipated matchup, a rare game between two defending state champions. The Wamps came in at 13-3 and will be looking for their third title in four years, but they missed injured 20-point a game scorer Adriana Timberlake and were down 8-1 right at the start. Guertin led 27-12 after a dominant first period and 41-22 at the half. It was 58-37 after three and basically over.

“We definitely missed Adriana, she’s one of our top scorers,” Braintree coach Kristen McDonnell said. “That being said, they’re such a good team, Bishop Guertin. They have every weapon.

“You try to go man, they beat you going to the basket. You try a little zone and trapping, they hit 3s up top. We could never really get momentum. … They have everything. And they’re great on ‘D’. And those little things that sometimes really good players don’t focus on, they do. So I give them credit.”

Remember when the outside game was considered a Cardinal weakness for a couple of years? Not so now, not after they hit seven 3’s on Sunday, four by senior Gabrielle Sousa, playing in her last regular season home game. She finished with 12 points and her halftime buzzer beater brought the house down.

“We practiced non-stop on what they were going to do,” Sousa said. “That’s probably the best team we’re going to see all season, and I think overall we executed really well. We played with a lot of heart.

“I wasn’t expecting to be that on, I hadn’t been on all season. It was nice to get it.”

“I could not be happier for Gabby,” Kreick said. “You couldn’t have scripted it any better for her Senior Day. Just a great kid, a tremendous program kid, works hard every single day. … I was really happy to see her step out and have that kind of game.”

“The kids just played with great energy,” Kreick said. “They found the balance between playing with energy and speed, and so forth but not rushing. Not always the easiest thing to do when we’re trying to play that quick.”

Now it’s at Windham Tuesday, Feehan on Friday, than at Portsmouth and Goffstown the following week. Kreick won’t take anything for granted.

“We have to play a Windham team we haven’t seen before,” he said. “One step at time.”

They hadn’t faced Braintree before either. Just ask the Wamps how that turned out.