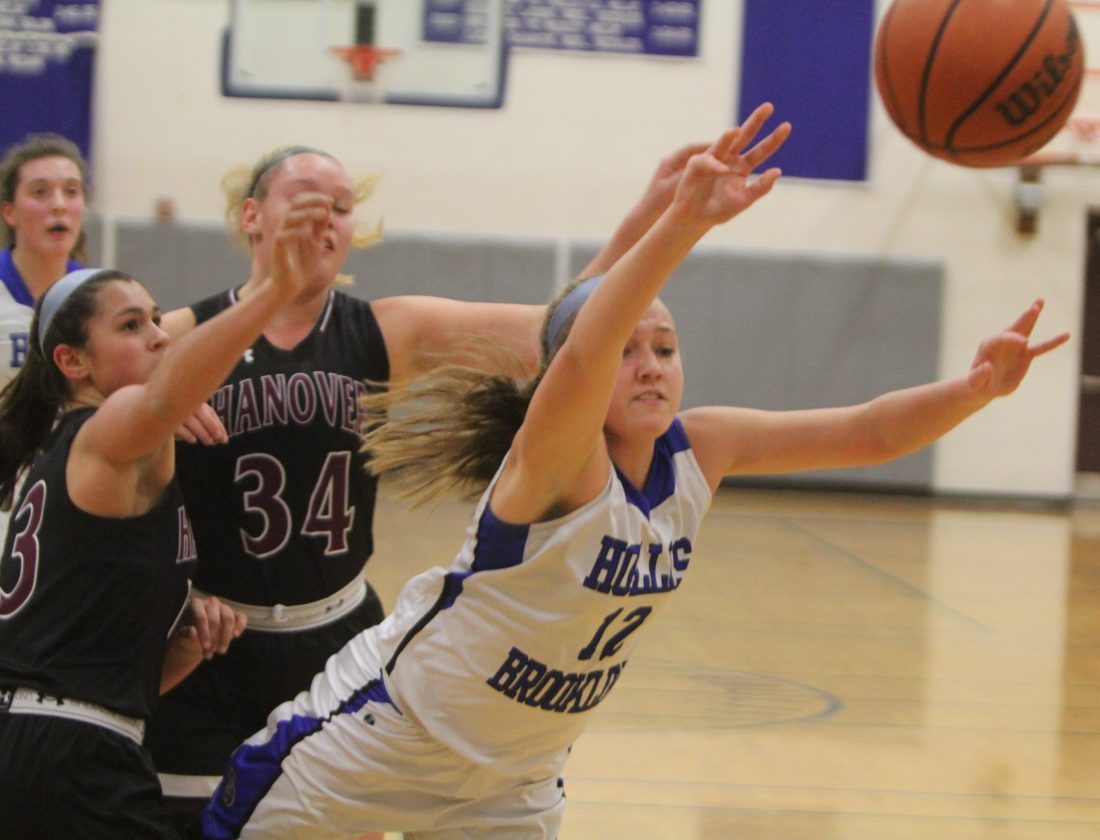 HOLLIS – Hollis Brookline High School girls basketball coach Bob Murphy would love for his team to have a second chance against powerful Hanover in a few weeks.

That’s after it gave the Marauders plenty of second chances in a 70-54 loss on Friday night.

“Yeah, of course I would,” Murphy said. “I want to get to that distance. We’ve had a couple of bad losses this season, but this was one of our better games, I thought.”

Murphy, the Cavaliers and the fans in attendance all could see why Hanover owns a 13-game winning streak after putting eight players in the scoring column, dominating the boards, and playing tenacious defense that made HB work twice as hard than normal for just about every shot it took.

“We knew Hollis was the defending champ and it’s never easy winning here,” Hanover coach Dan O’Rourke said after his team improved to 14-1, still trailing 15-0 Kennett atop the Division II standings. “I thought our kids played well. It was a very fast-paced game end to end but over time our depth wore them down.”

The game changed in the Marauders’ favor just before halftime. They trailed 25-19 with just under four minutes to go in the half but outscored the Cavs 13-3 to go into the locker room up 32-28. A sequence in which they had five second chances at the hoop before Willet Parkins scored a traditional three-point play set the tone for the rest of the night.

HB’s point guard Christina Balsamo tried to ignite the offense, fighting off an illness, and finished with 17 points. But Hanover’s Dianna Schwartz had 20 and fellow Marauder Maddy McCorkle 15 to offet what the Cavs could do. Liz Bonnette had 13 and Amanda Goclowski 10 for HB.

“When you have a team that plays that kind of defense full court, pressures the ball everywhere it is, and then having kids coming in off the bench just as talented, it’s just as tough to keep up with them,” Murphy said. “We thought our zone was working pretty well and then they’re attacking the middle of our zone. That’s tough to deal with.

“Pinpoint passes, those girls know what to do with the ball when it gets close to the hoop. Dan says he has one of the best and most fun teams he’s ever had,and I can see why. … I thought we hung in there for quite a while.”

It doesn’t get any easier for the 10-4 Cavs, who have to visit 12-3 Bishop Brady on Tuesday. If anything, these games are telling coaches like Murphy and O’Rourke something.

“We’re good,” O’Rourke said. “Unfortunately, there’s a lot of other good teams. And I’ve been in this long enough (to know) that one bad game and you’re done. …. We can pressure 94 feet, we can go nine deep. We’re a very good team, a talented team.”

The Cavaliers and their fans found that out the hard way last night.