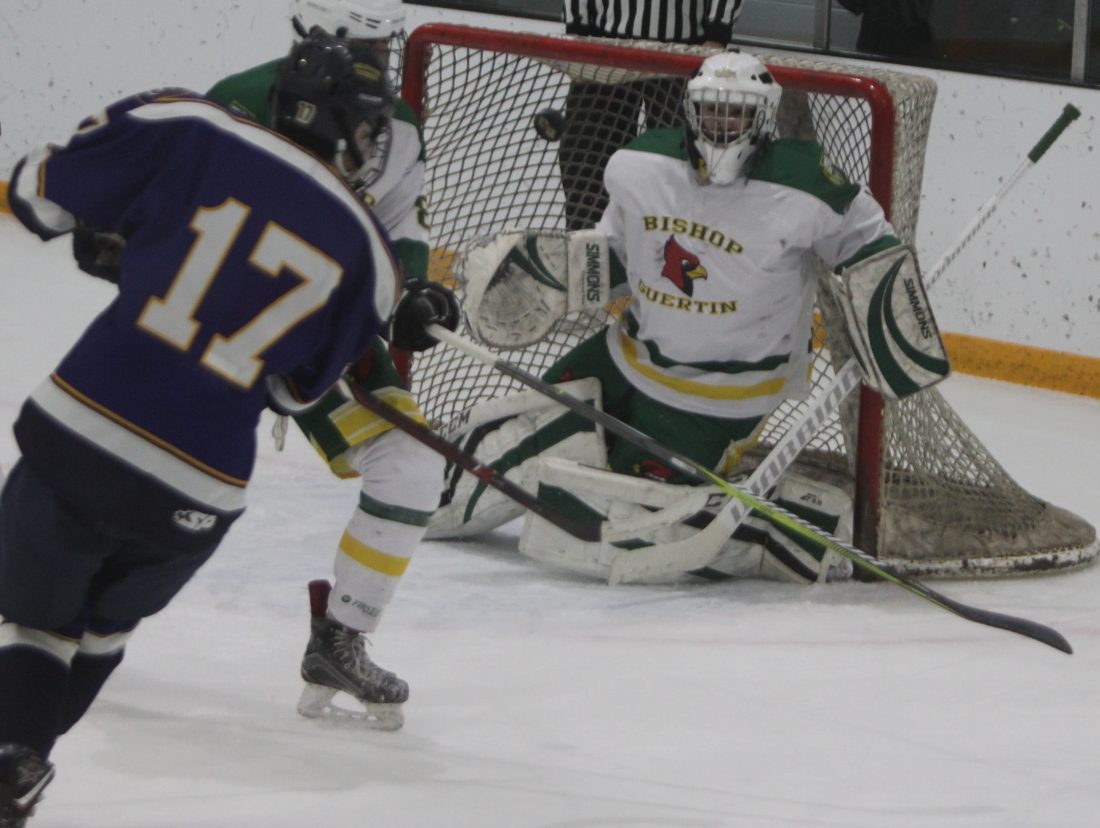 Telegraph photo by TOM KING Bishop Guertin goalie Nick Hall keeps his eye on the airborn puck off the stick of Arlington Catholic's Ben Murphy while Cardinal Mark McGaughey tries to help out during the Cards' 3-2 loss Monday at Skate 3.

TYNGSBOROUGH, Mass. – The toughest games to lose are the ones you always think you should’ve won.

And you can put the Bishop Guertin High School hockey team’s 3-2 loss to Arlington (Mass.) Catholic Monday afternoon at Skate 3 Arena in that category.

“Absolutely,” Guertin coach Gary Bishop said. “This would have been a nice game for us to win. … We had plenty of chances, a lot of shots (32).

“We’ve got 11 new guys. That means we have only nine with experience. Those nine have to step up in a game like this.”

Especially since the visiting Cougars are having, for them, a down year now at 4-6-1. Guertin (6-4 in Division I) had a 2-1 lead with two early third period goals but watched as AC’s Jason Smith scored two unassisted goals, tying it at 9:02 of the period and then getting the game winner on the power play with 3:45 left. Ouch.

“He’s a good big rugged style defenseman, shoots the puck hard, and has been working at trying to get the shot off a little quicker and get it to the net,” AC coach Dan Shine, who is in his 40th season as the Cougars head man, said. “You know when you get it to the net, it’s on net, good things happen.”

That’s what Bishop told his team prior to the start of the third period, as the Cards were trailing 1-0 on a Cougar goal by Carson Priante all the way back at 7:24 of the first period. And it was a first period in which the Cards controlled time of possession.

Guertin’s offense finally got untracked in the third, as Sean Kelly helped deflect in a shot from the point by Sam Cronin (assist also to Mark McGaughey) at 1:48.

Then enter Smith, who just over a minute later stole the puck in the BG end and surprised Cards goalie Nick Hall (20 saves) for the tying goal. It deflated the Cards.

“It did,” Bishop said. “We’re in good shape, and all of a sudden we give up that soft goal.Then the power play. That third goal, (Smith) was just dumping it in. Then (Hall) lost it at the last second and it just trickled in. Nothing you can do.”

It was a shame for Hall, because he kept Guertin in it, stopping one breakaway (AC’s John Smyth) and two partials. And what made this an even tougher loss is the fact Guertin has its next five on the road, including heavyweights Pinkerton, Bedford, and Malden Catholic. Bishop loves the tough out-of-state games but likely looked at this as one his young team could take.

“You’ve got a lot of new bodies, they need to play more games like this,” Bishop said. “That’s what we told them, that’s why we schedule games like this. We don’t have time to wait for you to mature. You have to figure it out on your own.”

Monday the Cards figured they let one get away, for sure.