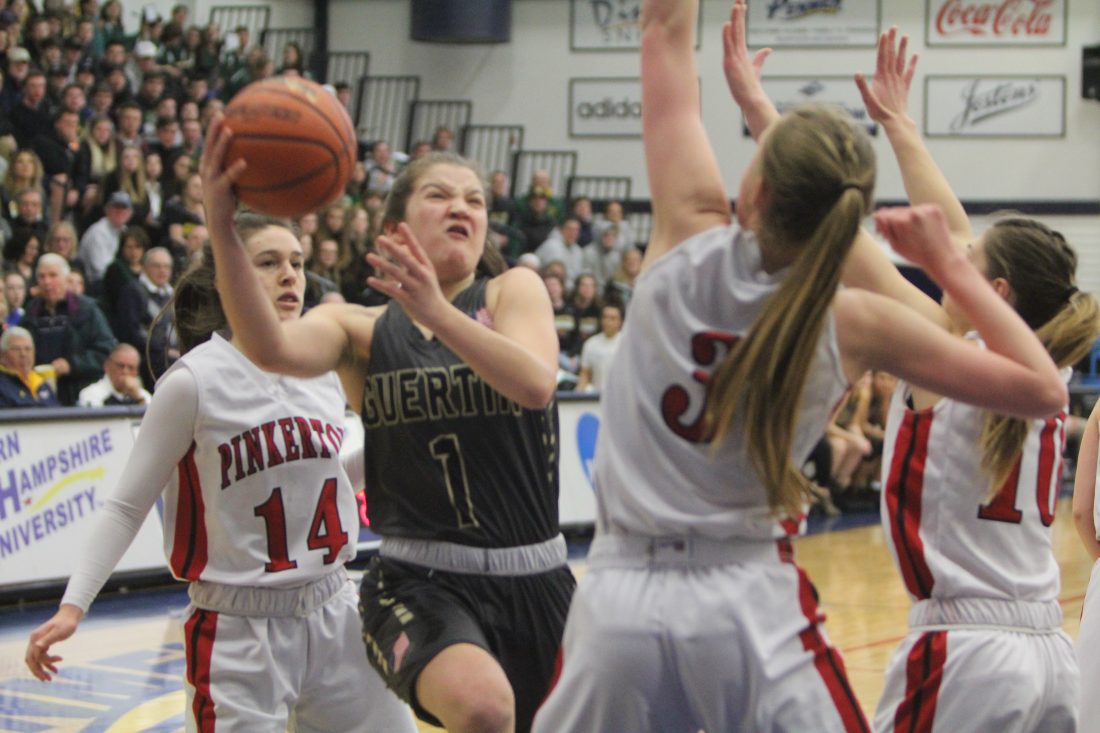 Telegraph file photo by TOM KING Bishop Guertin's Hannah Muchemore drives against Pinkerton's Madison Mahoney (14) and Brooke Kane during last year's Division I title game. All three players will be on the Hackler Gym floor in Derry tonight in a regular season rematch..

The basketball season for the Bishop Guertin High School girls has finally arrived.

The previous month-plus could almost be contrued as a glorified preseason. There haven’t been many challenges for the Cardinals. They even blew past rival Bedford just before the holidays.

But tonight they face a very important one in a rematch of last year’s Division I title game, vising Pinkerton Academy at the Hackler Gym in Derry at 6:30.

The Astros, who lost to the Cards 54-34 in that title bout, are 8-0 and have won their games in the same easy fashion as the Cardinals, who are 7-0. Pinkerton’s average margin of victory has been 32.3 points; the Cards’ average margin has been 40.7.

“I feel both teams will be hyped up,” Guertin coach Brad Kreick said. “They’re undefeated, and they’ve been beating teams prettily handidly as well.”

The Astros have been a contender routinely under the coaching of Lani Buskey. They graduated just two seniors from last year’s squad and have a couple of elite players to lead the way, six-foot senior Brooke Kane (18 points in last year’s title game), who is headed to the University of New Hampshire next year, and senior guard Madison Mahoney, who will take her talents to Souhern New Hampshire University.

Plus, the Astros can do something a lot of teams can’t when facing the Cardinals – match their depth.

“Every year they go eight or nine deep, always disciplined, they always have a good plan,” Kreick said. “They’re going to defend you and they never beat themselves.”

That certainly describes the Cardinals, who are going to look to push the tempo, something they have been able to do thus far this season with their tough, tenacious defense that forced 17 turnovers in last year’s title game. The Astros will likely want to slow the game down on offense and also force BG to shoot from the outside, something the Cardinals have improved on this year.

Guertin has been led by its guards Erin Carney and Hannah Muchemore, who have basically picked up where they left off last season both offensively and defensively, with Carney the team’s top scorer. But the Cardinal front line of sox footters Ava Owens and Addison Smith, plus 5-11 forward Aaliyah Foreman have gotten stronger, and that will be a key in battling the likes of Kane inside.

“We have to defend very well, rebound the basketball, and try to control the tempo,” Kreick said. “Keep the pace of the game up. This is going to be a very tough place to play, against a very good team. This will be a tough test for us.”

And then there’s more. One of Eastern Massachusetts’ better teams, Braintree, visits the Colligadome on Monday night, have a rivalry game at Nashua North next Thursday, and then Connecticut’s Mercy High School visits Nashua next Saturday. The warmup for all this was a 74-40 win at home over Manchester Memorial this past Tuesday.

“We’ve been looking forward to this two week stretch with Memorial, Pinkerton, Braintree, then Mercy,” Kreick said. “We’ve got a pretty competitive bunch of kids. But that doesn’t guarantee us anything of we don’t play well.”

A few hours after the Cardinals won their title at the SNHU Fieldhouse last March, the Campbell boys basketball team had their Division III title shot against Somersworth and had the Hilltoppers where they wanted them, up 30-22 with a tad over four minutes left in the third quarter before the Cougars lost their stride.

Right now, as Division III’s only unbeaten team (7-0) after knocking off the other unbeaten, Hopkinton, the other night, they’re hoping to get back to that big stage. One of the differences is the change at head coach, as Frank Girginis took over for Sudi Lett, who left to coach his alma mater Manchester Central.

The goal for the Cougars, who visit Prospect Mountain tonight, is to not run out of gas this time.

“(Girginis) is all about conditioning,” Cougar junior forward Carter Vedrani said. “He wants us to make sure we can play five or six quarters instead of just four. So he’s doing a great job getting us ready for the long and hard games.”

And that’s not easy for a team that likes to play up-tempo.

“We’re not the biggest team,” Vedrani said. “We’ve got a lot of short, quick kids, that really helps us play that way.”

“I’m trying to put practice harder, because hopefully if we take care of business, and we have the opportunity to get to SNHU, we’re going to need those legs.”

Girginis also knows he has to mix up the tempo at times. “We can’t just go full throttle all the time,” he said. “They’re doing a good job of really starting to understand that, and know ‘Hey, we can go down to second and third gear and still be as productive.'”

The Cougars definitely, after having the taste of a title game last year, are committed to getting another shot. Girgnis would love to sneak up on people but that’s not going to happen. Now.

“Theyre hungry,” Girginis said. “One game at a time, ignore the noise, and hopefully we can reach where we want to go.”

Speaking of reaching where they want to go, the Nashua High School South-Pelham hockey team wants to make it two years in a row for the Division I tournament. They are 3-4 right now, have back-to-back games against contenders Bedford Saturday at St. Anselm’s Sullivan Arena and (scheduled) vs. Concord Monday afternoon at Conway Arena. After that the rest of the schedule is against teams on their level, including two vs. rival Nashua North-Souhegan.

“I would say we need four more (wins),” Kings coach Shawn Connors said. “And I think we easily have four more as long as we play our game.”

Which, he noted, they didn’t do even in beating Manchester Central-West the other day 8-5.

There seems to be a feeling that the Little Green-Blue Knights co-op will be on the rise over the next couple of years with a host of freshmen supposedly coming in to join the 10 who are already on the team.

“We’re looking forward to that,” C-W coach Eric Fischer said. “We’re going to get the numbers up (they have just 12 skaters) so energy doesn’t because the issue it’s been.”

Both the Kings and the North-Souhegan Saber-Titans have been there.

Condolences go out to the family of former Nashua athletic department administrator and tennis coach Suzanne Klink, who sadly passed away this week after a three-year battle with cancer.

Klink eventually became the athletic director at Pembroke Academy, before her illness impacted her career. Wherever she worked in athletics, she was immensely popular.

Back to Litchfield, where Campbell will once again be looking for a varsity baseball coach, their third in three years. The process began when longtime coach Jim Gorham retired after his 2017 team won the Division III title.

The search for his replacement last year hit a speed bump when Wil Henderson declined to take the job after it was offered and the Cougars turned just prior to the start of practice in mid-March to former Daniel Webster College coach Jim Cardello, who also has a strong softball background. Cardello, however, informed athletic director Jared Mills he wasn’t going to be able to return this spring. But Mills expects to settle on a coach much sooner than he did a year ago, and wants a long-term solution.

“That’s always the goal,” Mills said. “It’s always tough. (Cardello) brought a lot of good things to the table, had a lot of knowledge. But we’re in the process now of finiding somebody else. I have a good number of applicants, probably five or six at this point.”

Mills said no one on Cardello’s staff applied for the job.

Things resume Monday (as scheduled), with the boys and girls ski teams competing at Pat’s Peak at 4 p.m.

Here is the rest of the Battle of the Bridge schedule:

The girls and boys varsity basketball teams play their annual doubleheader on Friday, Feb. 1, starting with the girls at 5:30 p.m. and the boys at 7, at Nashua South (snow date Saturday, Feb. 2). Finally, the JV hockey teams play Wednesday, Feb. 13 at Conway Arena at 6:20 p.m.

Friday is usually a big basketball night, but Nashua South will be hosting Concord in a varsity wrestling dual meet in the school’s medium gym. The highlight of this will be the attempt for Panther wrestler Tom Cullerton to get his 100th career win.