BG, rest of the locals all set as girls hoop season set to begin 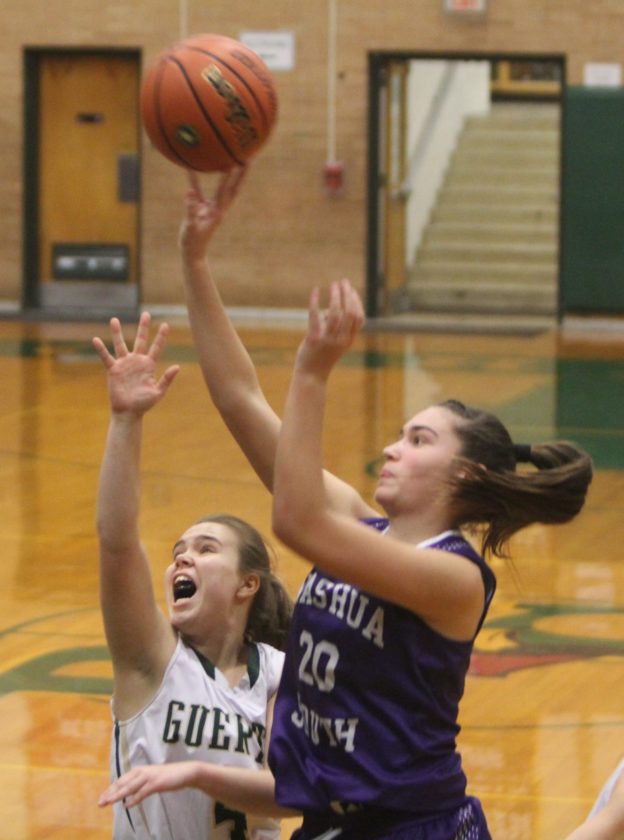 Staff photo by TOM KING Nashua South's Kirsten McIntire gets a shot off against the intense defensive efforts of Bishop Guertin's Aria O'Connell during last March's tourney prelim round game. The local Division I season gets underway on Tuesday.

NASHUA – Anybody for another four-peat?

The Bishop Guertin High School girls basketball team is all for it.

Of course, they’re the only ones. The three-time defending Divison I champions, who open up at home Thursday night vs. Winnacunnet, will be chased by rival Bedford and last year’s runnerup, Pinkerton. It’s a chase that will be fun to watch.

“We only lost one senior, but she was pretty important,” Cardinals coach Brad Kreick, who returns five starters and nine players overall, said of the graduated Caroline Hoffer. “When things got hard, she was the one everybody looked to to stabilize things. So going into the season we’ll be looking for that kid everybody looks to. But we’ve got 11 on the varsity, and it’s going to take all 11 kids.

“But as the season goes on, someone will emerge to take that role.”

The Cards have scoring guard Erin Carney back, and she could be the one. But they have lots of depth, and will play a tough out-of state schedule as usual to try to make them tougher as the season winds down.

“We want to be playing our best basketball in late February,” Kreick said.

Bedford lost an experienced core. “They’re a little different, they’ve gotten younger,” Kreick said. “But very, very talented. I suspect they’ll be a lot better in March than in December-January.”

The Astros graduated talented point guard Amanda Lemire but she was just one of two seniors, so expect a Final Four trip.

Locally, Nashua North returns with a core of seniors that have been together through thick and thin.

“Their experience and dedication to each other and our team is the key to this year,” Titans coach Christina Bean said.

And Nashua South? The Panthers anointed a new coach, Doug Booth, in the off-season, and he intends to build on last year’s 7-11 regular season that featured a great stretch run to the playoffs under interim coach Dave Hogan but ended with an expected prelim round loss to Guertin. Booth will be the third coach in three years but says his team is resilient with high expectations that will make the Panthers “very competitve.”

Merrimack graduated six seniors from a team that was good enough for the Final Four a year ago were it not for the bad luck of being seeded with Guertin. But, with the young players coming back, keep an eye on the likes of sophomore Theresa Twardosky and junior Sam Page.

And finally, Alvirne hopes to recover from a tough 5-13 season in which they did play better down the stretch. However, expected starting junior point guard Grace Hodgdon will likely miss the season due to a knee injury. But seven players return with varsity experience.

LAST SEASON: 5-13, did not qualify for tournament.

COACH’S COMMENTS: “The coaches and players have an expectation that we will be a much improved team this season,” Cheetham said. “Our athleticism and depth should prove to be a strength. At our core, we pride ourselves on defense and if we play with energy, we expect to compete every night.”

COACH’S COMMENTS: “We should be really deep,” Kreick said, “and we’re at our best when we’re nine or 10 deep.”

COACH’S COMMENTS: “Our team is young, gritty, and hungry,” Cheetham said. “Our goal is to get a little better every day, and continue to focus on the bigger impact we can have as student-athlete leaders in our community.”

LAST SEASON: 8-11, lost to Manchester Central in first round

COACH’S COMMENTS: “We have a group of girls who are ready and prepared to have a successful season,” Bean said. “The hear to four team is our seven seniors who have a long history together.”

LAST SEASON: 7-12, lost to Bishop Guertin in first round.

COACH’S COMMENTS: “This group is very cohesive, hard-working and talented,” Booth said. “The expectations the team has set should make them very competitive this year.”