Cards still may have a enough to make another splash 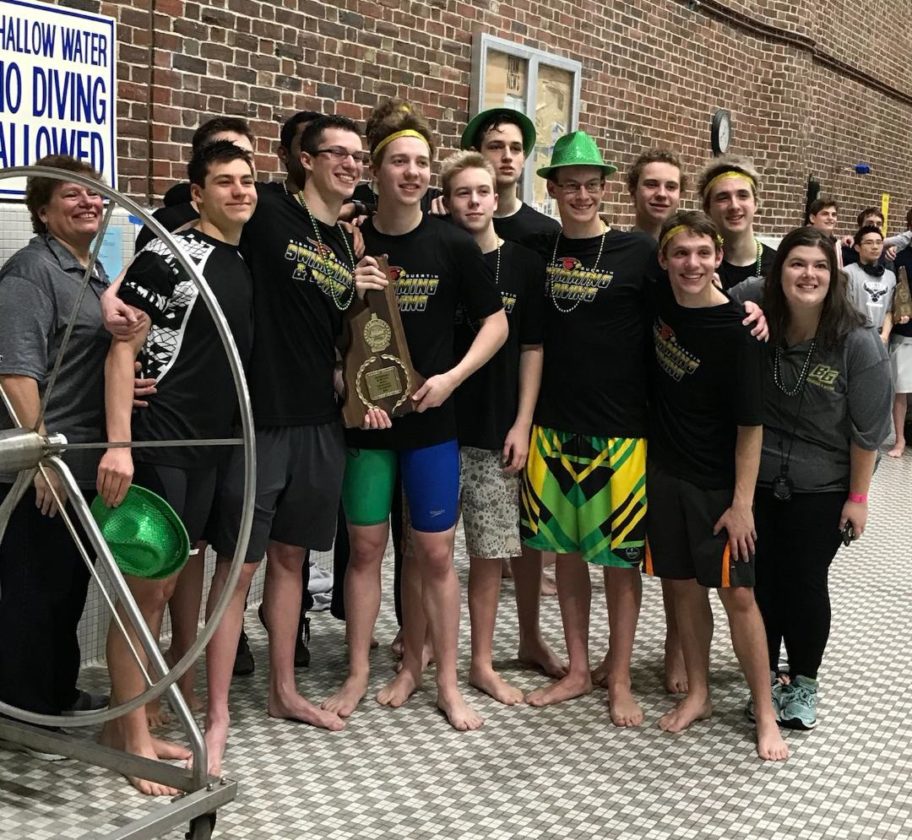 They finally swam to the top of the Division I mountain last February.

Now the question is, can the Bishop Guertin High School boys swim team stay there?

“The boys are focused and getting ready for a great season,” Cardinals coach Christine Rousseau said as Guertin gets set to defend its Division I state title. “Their expectations are high.”

And why shouldn’t they be? Yes, three-time Telegraph Swimmer of the Year Mark Zoda is now performing for Bentley University, but the Cards have other key swimmers back, led by senior Matt Lashua, who was a state champ a year ago in the 200 intermediate medley, and fellow senior John Puksta, who won the 100 free. And there are others who provided the Cards with the points they needed to win.

The pool competition begins this weekend with several locals involved in meets on Friday and Saturday at the Nashua Boys & Girls Club pool. It should be an interesting season on both boys and girls fronts, especially in Division I. Former Guertin coach Brendan McLaughlin has taken over the Alvirne program, with his brother Sean moving over to assist Rousseau at Guertin. The new Broncos coach inherits a two-time defending state girls dive champion in Skyler Bomba, not a bad inheritance.

“I’m looking forward to coaching this group,” McLaughlin said. “They have lots of potential.”

The Nashua South girls and North boys are looking to take the next step. The Panthers have several back from a team that finished fourth in last year’s state meet, which was won with ease by Exeter. “We’re hopeful to continue this streak,” Panthers co-coach Jenelle Dolan said.

The North boys also have a strong foundation after finishing seventh a year ago.

“We have a good amount of freshmen this year, which gives us hope to stay competitive for some years to come,” Titans coach Jon Massey said.

Merrimack has two key senior swimmers back for its boys and girls teams – Evan Whaley and Lauren Brennan. Brennan is the reigning Division I 500 free champion while Whaley was fifth in the 200 free.

“Both are year-round club swimmers and are returning with the hopes of getting on the blocks again in the top six of their events in the Division I championship meet in February,” Tomahawks coach Audra Saunders said.

In Division II boys and girls, the strongest team appears to be the Souhegan girls, who have several returnees from a team that finished fifth in last year’s Division II state meet. Milford also has several back and are hoping to make an impact in February as well. Good numbers are giving Hollis Brookline the hope of improving on a 10th spot last year (girls) and cracking the top 10 in boys.

COACH’S COMMENTS: “This is a really young talented group,” McLaughlin said. “The sky is the limit as these are some of the hardest workers I’ve ever coached. Excited to see how this team will do.”

COACH’S COMMENTS: “They know if they work hard and stick together as a team their goals can be achieved,” Rousseau said.

COACH’S COMMENTS: “With half our team being new, we are working on building that team camaraderie.”

COACH’S COMMENTS: “We’ve had a young team for a couple of years now,” Massey said. “This year I’m excited to see our youth mature and our upperclassmen develop into strong swimmers in hopes of making a big impact.”

COACH’S COMMENTS: “We’re very excited for this season, and are sure to accomplish great things,” Dolan said.

COACH’S COMMENTS: “We’re a deeper team in the past, with more year-round and experienced swimmers,” McManus said.

LAST SEASON: Did not compete in Division II state meet.

COACH’S COMMENTS: “It’s definitely a rebuilding year for the boys team, as we graduated five last year,” Thibodeau said. “We’re excited to grow our new swimmers and strengthen our returning ones.”

COACH’S COMMENTS: “This year we have a great mix of veterans and newcomers,” McLaughlin said. “We should do very well.”

COACH’S COMMENTS: “The freshman class, exchange students are going to make a big splash with our experienced swimmers,” Rousseau said. “Their expectations are to finish close to the top at the states.”

COACH’S COMMENTS: “Lubeiczyk has made a strong presence in her first season,” Saunders said. “We look forward to see how her swimming contributes to our competition season.”

COACH’S COMMENTS: “We believe hard work now yields better results later,” Konstantinidis said. “Our swimmers are successful both in and out of the water.”

COACH’S COMMENTS: “We’re pleased to have such a strong group of returning swimmers,” Ouellette said.

COACH’S COMMENTS: “I anticipate that we’ll have a larger state meet team than we’ve had in the past,” McManus said, “and a stronger than usual performance during the entire season.”

COACH’S COMMENTS: “We think the girls team will be strong for the state championships this year,” Thibodeau said.