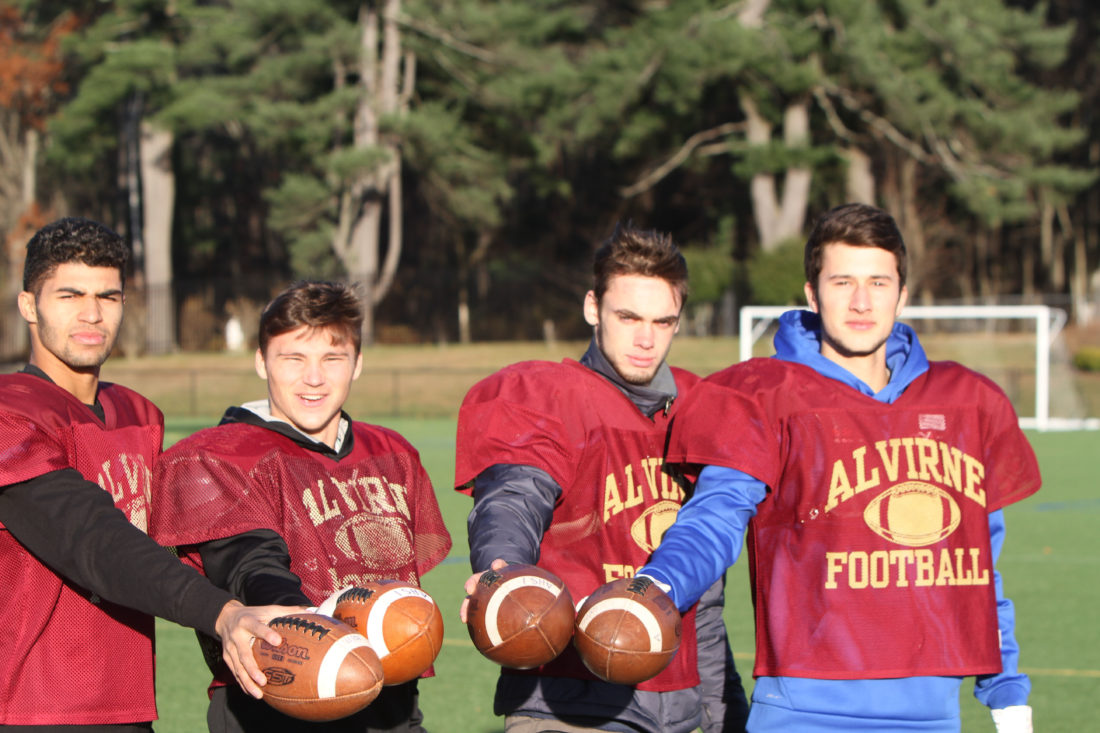 Quarterback Kyle Gora has four devastating targets, and he’s not shy about using them. It is the defense’s job to figure out which one. And so far in the run to the Division II playoffs and Saturday’s (2:30 p.m.) state title game vs. top-seeded Plymouth at UNH, that has proven to be pretty much impossible.

The Saints had to feel ambushed when Gora found Morgan Williams for the biggest grab of the night, 35 yards, setting up the game-winning TD. Of course, with his three catches for 59 yards in the shocker, Williams, a defensive secondary standout, more than doubled his season offensive output. It was phenomenal. It was so … Alvirne.

Together as a unit, they are special. And individually, each brings a piece to the puzzle that is extremely unique.

Bertrand might as well be the poster child for coach Tarek Rothe’s new era in Alvirne football.

A three-year varsity soccer player and a varsity hoop player, Bertrand was convinced by Rothe during track last spring to give football a try.

“He was always pushing me to try football, so I figured I’d give it a shot,” said Bertrand, who has 19 catches for 334 yards and a pair of scores. “When I came in I didn’t know a thing about football. I had never played, but the coaches worked with me right away.”

Of course, nobody in Maroon and Gold knew how he’d handle the contact of the game, and Bertrand didn’t either.

“When I played in the first scrimmage against BG, I caught the ball and just ran,” he said. “I knew contact was coming. It was part of it. But when I took the hit, everyone was looking at me to see how I’d react. I just bounced right back up. I was ready for the next play. That’s when I knew I could handle it.”

Bertrand’s senior classmate, Regan, is an absolute mark of resilience and heart.

Regan watched from the sideline, playing backup to Gora, the hotshot freshman QB, in a tough 2-7 campaign.

He wasn’t about to let senior year slip by, so Regan made the move outside to receiver, mainly out of a desire to play.

There was no ego issue. He hit the ground running, scoring the game-winning TD, his eighth catch of the night in the Week 3 win over Souhegan.

“I just practiced real hard, and moving was really no problem. I just go up and catch the ball,” said Regan, who is now talking about continuing to play the game in college.

“I love football, and I don’t want it to end. And now that I’m playing receiver, I even love it more.”

For Boucher, a junior, splitting the snaps and the targets with the other three athletes is a major benefit. On a tight-knight team, the receivers are as unified as can be.

“We toss the ball around together at practice, hang out together, sit on the bus together, it’s just a great time,” said Boucher, who will likely be joined by Williams and Regan playing rec hoop while supporting Bertrand as he suits up for the Broncos on the hardwood this winter.

“I love them all. We’re like brothers. We just go out and make plays, and as long as we get the win that’s all that really matters.”

Williams is the fourth and final piece, having moved to Hudson from Michigan in the fourth grade. The 6-foot-2 athlete first earned his time at cornerback.

“I love defense, that gets me going,” said Williams

But when the heat was on Saturday, it was all about the offense.

“My height and my speed help,” he said. “I was pretty excited. I’m just glad Kyle threw it my way.”