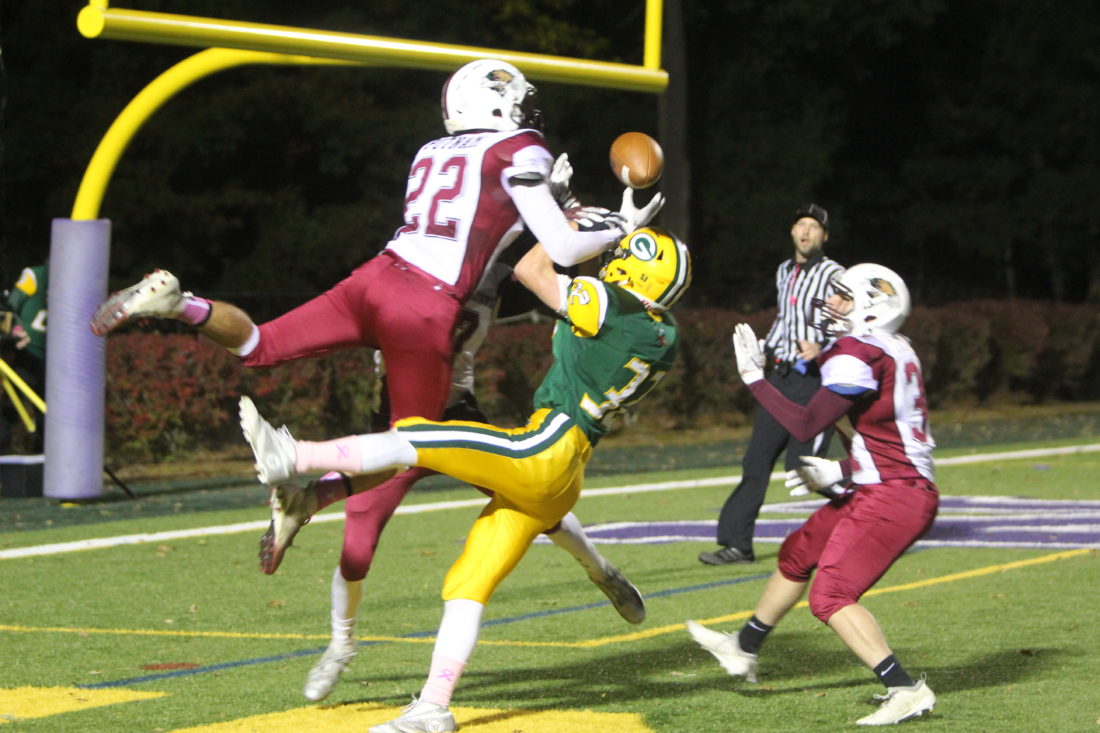 But perhaps a year from now, things will be just the opposite for the Bishop Guertin High School football team.

But for now, the Cards are mired in a 1-7 season after a 35-20 loss to Goffstown Saturday night at Stellos Stadium, and no future talk is good enough for Cards head coach John Trisciani.

“Walking out of here, I’m not happy,” Trisciani said. “And I talked to the kids about it. It’s like every other game, you’ve got to watch the film and see what happened and go from there. But I didn’t like it.”

The theme was the same: Guertin was competitive, but couldn’t make the big stop on defense or the big offensive play when needed.

When they finally broke through on Joey Lupo’s 27 yard TD catch of a Hayden Moses throw, it was with 2:01 left in the third period and Guertin had already spotted the Grizzlies a 28-0 lead.

“BG battled back,” Goffstown coach Justin Hufft said. “I’m very impressed with them. I’m pleased we came in banged up, without a couple of our best players, and did what we had to do to win the game.”

The Cards had other opportunites, finding themselves in Grizzly territory four times in the first half, two in the red zone.

“It’s frustrating,” Trisciani said. “That’s been the case in a couple of games, to get down there with no points. We turn the ball over. Yeah, it’s frustrating.”

On the first, starting QB Hayden Moses (11-of-28 for 148 yards, three TDs and one INT) was picked off at the 6 by Goffstown’s Jack Stinnett midway through the first quarter.

Another resulted in a blocked field goal. In the second quarter, the Cards fumbled it away at the 30.

Goffstown, now 5-3 and in control of their playoff destiny, took the opening kick and drove seven plays with a big fourth down pass 25-yard TD pass by Jarrett Henault to Sean Leahy to help make it 7-0 with 9:36 left in the first quarter.

It stayed that way until just less than a minute into the second quarter, when Henault scampered in from 10 yards out. The PAT made it 14-0, which was the score the Grizzlies took into the locker room.

A blocked punt – the visitors’ second blocked kick of the night – resulted in a first down at the Cardinal 11 early in the third. Henault, after a momentary bobble, ran it in from 7 yards out and the Grizzlies were up 21-0 with just under 10 minutes left in the third.

The Cards did make some late noise, getting a 14-yard Moses TD to Kyle Baker with 6:29 left for a 35-12 count and after a turnover, a 15-yard Austin Hiscoe TD catch and two-point conversion reception with 5:25 to play making it 35-20.