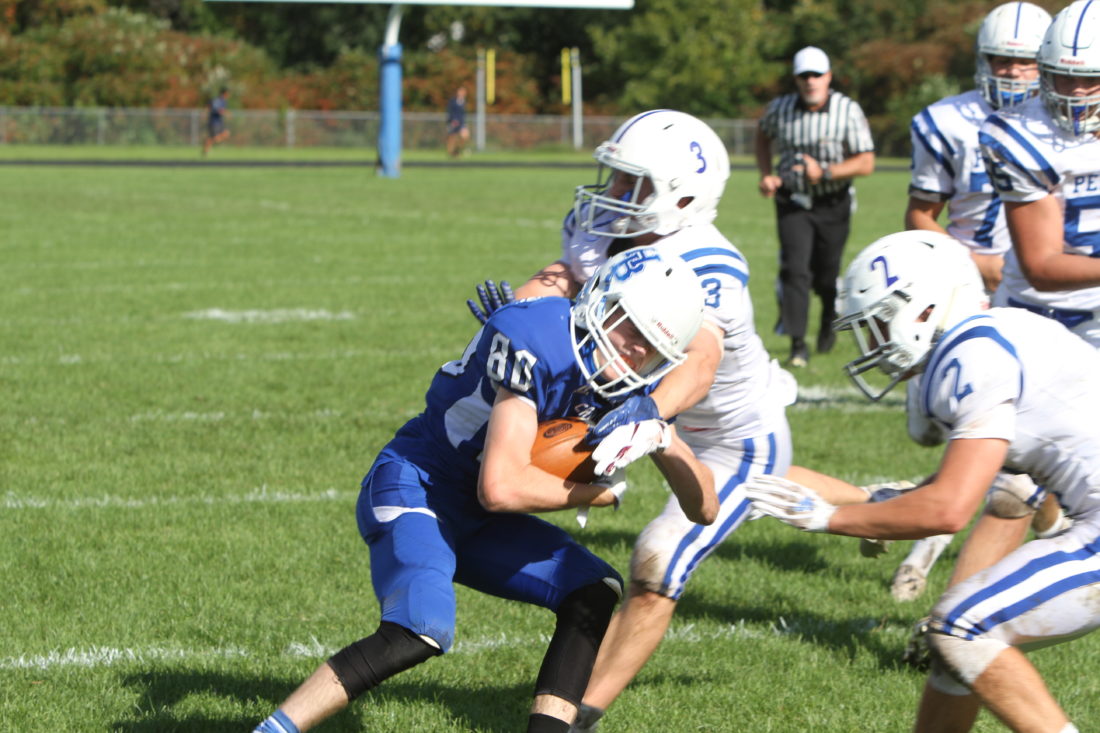 Hollis Brookline's Blake Bergerson lowers the shoulder on this reception.

HOLLIS ­- The wakeup call came quick, and if you can be realistic, at the right time for Hollis Brookline High School.

Pelham High slinked into “The Swamp” and routed the host Cavaliers, 43-14, adding even more confusion to the already puzzling Division II playoff race.

Both teams now stand at 3-2 with Milford High, while Manchester West and Souhegan are now 2-3, leaving all five teams in what appears to be a mad scramble for the final two South playoff spots.

The knockout came early and was no surprise to HB coach Chris Lones.

“It started on Monday. We had five kids miss practice Monday, and four missed on Tuesday. Wednesday, we had three more,” said Lones, estimating that in all there were 27 practices missed team-wide.

“We had three kids benched today, who didn’t start. All seniors, all starters. If you can’t make it to class, you can’t start games.”

That said, it was Pelham, who dictated the pace and dominated from the opening snap.

“They do hit hard. They are physical. We knew they would be physical. They come in and they punch you in the mouth. They just played hard.”

Charlie Katin opened things with a 55-yard TD run, and the rout was on.

Then came the first-half air show. If you had Pythons QB Ian Hoey and/or receiver Nicholas Milano in fantasy, you struck big.

The duo connected on four straight TD bombs before the break, 36, 50, 67 and 58 yards – three of which seemed to dangle on the fingertips of an HB defensive back, only to see Milano take the cookie and run to the house.

By the half it was 30-0, and a quick Pythons’ TD plunge by Hoey sent the clock to running time.

“That hasn’t happened to us since my first year here against Milford,” said Lones.

Offensively, the Cavs were under siege. QB Sander Wimmer struggled to find open receivers. When he did, there were a series of drops and misfires. When he didn’t, he took a savage pounding, with four Pelham sacks and numerous loud hits on/after the release … Clean hits but punishing hits.

Wimmer was 15 of 29 for 104 yards. Trailing 43-0, Wimmer’s 4-yard TD run, on which he was sandwiched hard at the goal-line, and a 6-yarder by sophomore Marc-Andre Thermitus represented the only scores from HB.

Thermitus ran hard in his time late, and Joe Messina showed some pretty good hands late in the receiving game.