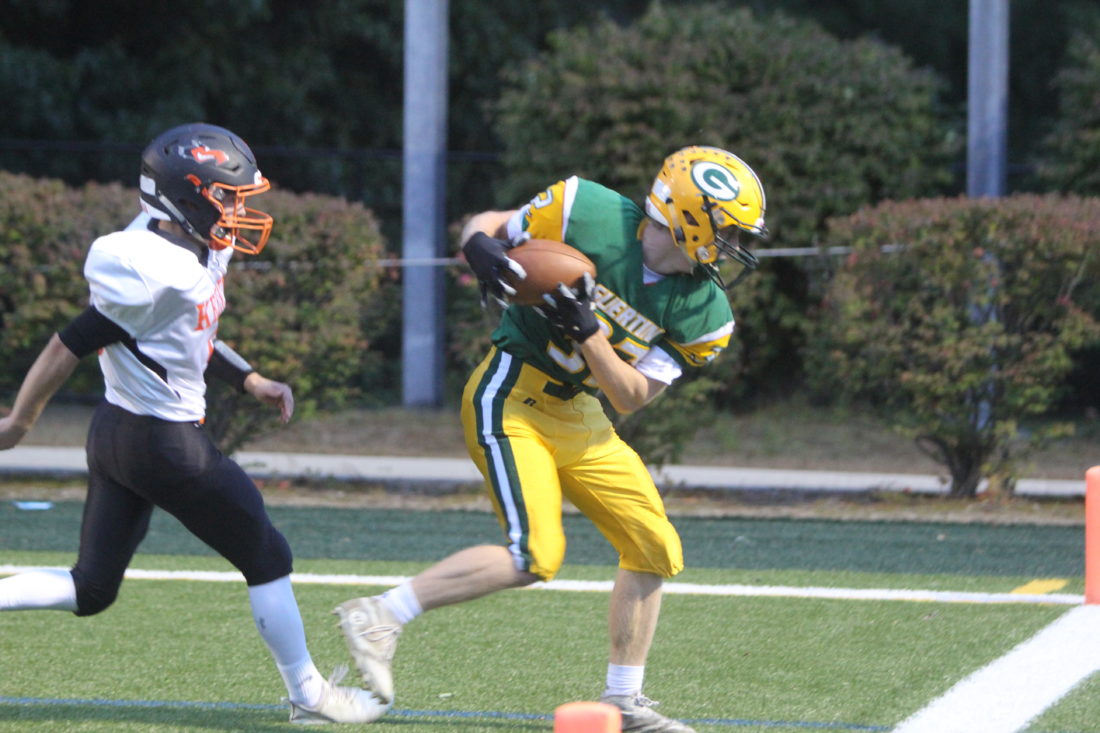 What happened? The Cardinals had been struggling on that side of the ball the first three weeks, but Saturday night they erupted for 42 points and 362 total yards in a 42-0 stomping of Keene at Stellos Stadium.

“Competiton breeds success,” said Cardinal coach John Triciaini, who earned his first career win as a head coach. “We try to tell the kids each week is a new week.”

So the competition winner this past week at quarterback was sophomore Joey DaSilva, who completed 15 of 19 passes for 194 yards and three TDs, while running for 81 yards and a score in his first-ever varsity start. Remember, this was a BG team (now 1-3) that had scored a grand total of 30 points the first three weeks.

“I had a lot of butterflies in my stomach,” DaSilva said. “It was my first varsity start. The coaches helped me out,

getting comfortable with my plays. And the wide receivers always had my back, and my running backs too.”

And it didn’t hurt that the game began with a Joey Lupo 85 yard opening kickoff TD return, taking a lot of the heat off everyone.

“That’s kind of like a coach’s dream,” Trisciani said. “If you get one at any time, it’s usually a big momentum shift. And to start a game 7-0 right off the bat, the kids are really excited. … And Joey’s really good at returning kicks, no doubt about that.”

The Cardinals, to their credit, kept attacking the 1-3 Blackbirds, losers of three straight. DaSilva, getting the start, found Lupo in the corner of the end zone for a 28-yard TD with 6:35 left in the first quarter for a 13-0 Cardinal lead (kick failed).

DaSilva didn’t miss too many passes the rest of the way.

“That’s more of what we’re looking for,” Trisciani said. “We don’t want to get in a game where we’re throwing 30 times a game.”

“It’s not what we saw on film,” said Keene coach Bill Hope, whose team has given up 102 points in two weeks. “We were expecting them to run more. We shut down the run, but we couldn’t cover a couple of those guys and we just weren’t getting it done.”

Guertin took a 28-0 lead into the second half, thanks to two TDs and a safety.Ryan Bue’s 57-yard TD run nearly three minutes into the second – right after the Cardinal defense stopped Keene in the red zone – helped make it a 20-0 game.

A fourth down Keene punt attempt resulted in a safety thanks to a bad snap that punter Taylor Bemis smartly took out of the end zone once he scooped it up.

Working on a short field, DaSilva hit Austin Hiscoe on a 33-yard TD with just over six mintes left in the half for a 28-0 advantage.

DaSilva picked up right where he left off in the second half, engineering an 11-play, 77-yard drive after a Lupo 66-yard punt return for an apparent score was called back due to an illegal hit.

DaSilva raced 32 yards to the Blackbird 6 and later hit Hiscoe on a 3-yard TD with 5:40 left in the third quarter. Calvin Jozokos’ PAT kick made it 35-0, creating the mercy rule running time.

“It’s a step in the positive direction,” Trisciani said, “something we’d like to build off of.”