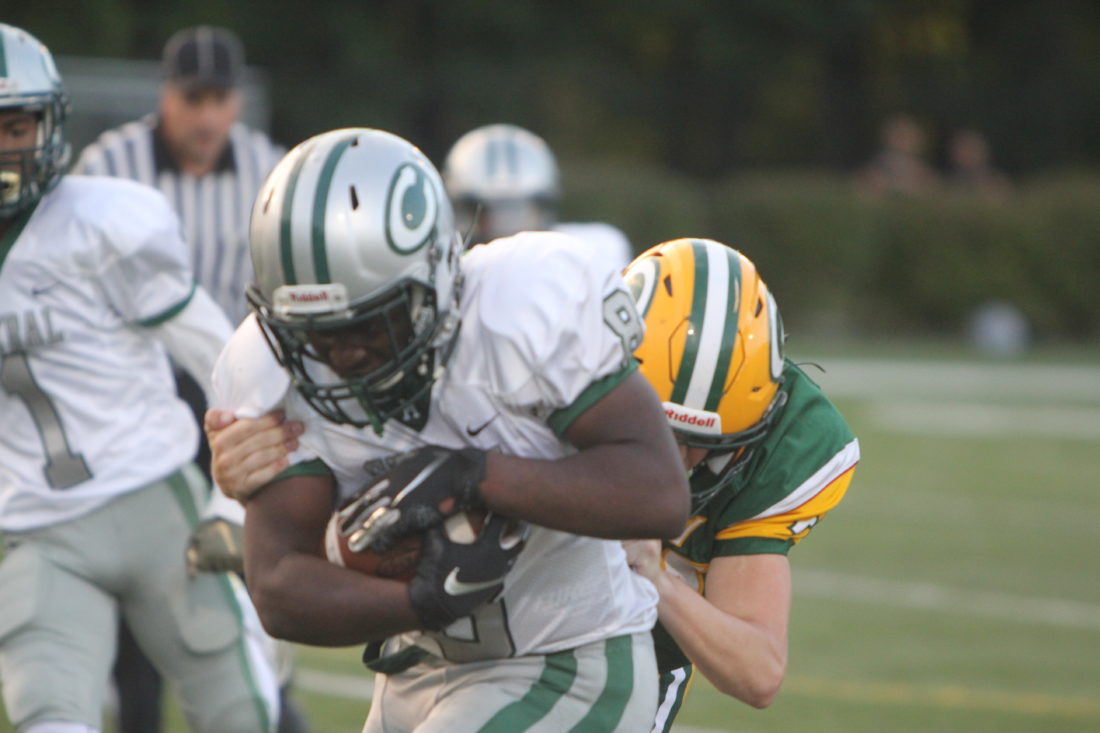 NASHUA – There was a huge difference between the Manchester Central and Bishop Guertin High School football teams on Saturday night.

But the biggest was the fact the Little Green had huge QB Alex Hawkom, and the Cardinals didn’t.

Hawkom threw for three TDs and ran for one more as Central dominated Guertin, 33-16, in the season opener for both at Stellos Stadium.

“I would say, in my opinion, since I’ve been coaching, Alex Hawkcom’s the best quarterback that I’ve seen,” Guertin coach John Trisciani said after his head man debut. “I’ve heard nothing but great things about him as a person, as a kid, and I was impressed with him out here.”

It was evident right away. Central grabbed a 7-0 lead in the first quarter as Hawkom capped a 10-play, 49-yard drive with a 4-yard TD run.

“He’s good, he’s good” Central coach Ryan Ray said of Hawkom. “But obviously tonight was just an opportunity to get out and get a win, and compete in our first, live game, and get a ‘W’.”

The Little Green made it 13-0 with 9:34 left in the second quarter on Hawkom’s 23-yard catch-and-run TD pass to speedy Nick Olibrice. It came after a potential second TD run by Hawkom was called back due to a holding penalty.

But the back-breaker was Central’s third TD of the half, giving the Little Green a 19-0 advantage at intermission. Cards’ quarterback Hayden Moses tossed his second pick of the game, this one by Olibrice, halting a potential Guertin drive late in the period.

plays later, Central’s Cooper Verano bulled his way in from 2 yards out, but the two-point conversion attempt was no good.

Guertin was limited to 40 yards in the first half.

Central basically put things away on its opening second half drive, a 10-play, 65-yard journey that ended with Hawkom flipping a 6-yard TD pass to Olibrice with 8:22 left in the third quarter to help make it a 26-0 game.

The Cards suffered with just 40 yards of offense in the first half. But, down 26 points, they handed the keys for the second time in the game to sophomore QB Joey DaSilva. DaSilva led them on a 69-yard march, rushing for 22 yards and and throwing for 27. But it was Austin Hiscoe on a trick play throwing for BG’s first score of the season, a 9-yard TD to Joey Lupo, with 3:31 left in the third. DaSilva did run in a two-point conversion to cut Central’s lead to 26-8.

But just 1:30 later Hawkom struck again, escaping trouble and firing a 27-yard strike to Olibrice. The PAT kick made it 33-8.

DaSilva’s magic ran out a bit when he threw BG’s fourth pick of the night to Central’s Dylan Feliciano on a deep rout with 7:10 to play. But, he made up for it later with a 5-yard TD run with 4:04 to play and added a two-pointer to make it 33-16.

Before the game, a moment of silence was held in memory of Susan Jozokos, mother of Guertin junior linebacker Matt Jozokos, who passed away after an illnesss on Saturday. Jozokos, according to Trisciani, decided during the day he wanted to play and play he did, all the way through the fourth quarter.