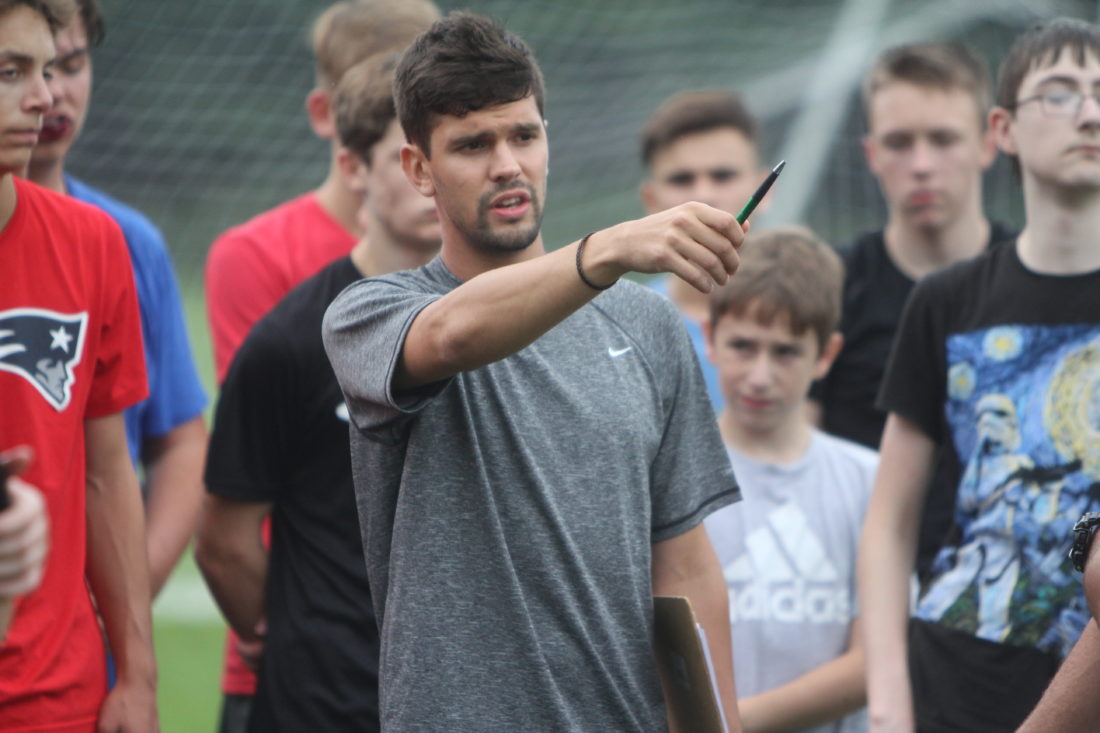 Former Eagle Marcos Vieira Filho was just hired a few weeks ago to take over the Alvirne High School boys soccer program, and he brought a couple of his old DWC teammates, Michael Ottman and Kevin Dos Santos with him as assistants.

Not only that, but former Campbell JV coach Ian Hutchinson is now the JV coach at Nashua South, completing another all-Eagle one-two deal, because Joe Morgan, who graduated from DWC in 2015 and scored the winning goal in the 2014 NECC championship game, is the Panthers’ head coach. Remember, all these players played a role in multiple NCAA tourney appearances for the Eagles.

For Vieira Filho, this is his first head job, but it’s almost a dream come true because he played for Alvirne and former coach Jeff Blackwell, who recently stepped down. He was the JV coach at Hollis Brookline a year ago and found that the Broncos job was open.

“It feels good, it feels really good,” Vieira Filho said. “Hopefully I can bring a little change to the program and get some wins here.”

But he knows the jump from JV to varsity will be big. Yet the college success he and his assistants enjoyed at the now-closed DWC counts for a lot.

“Obviously we were able to get some championships under our belt,” he said. “I felt like at Hollis JV sometimes I was being a little too hard on them, based on the experience I had in college. But it gives me a little leeway to push these kids a little more.”

Vieira-Filho said he learned a ton coaching the younger Cavaliers last fall, thanks to the varsity coach their, Steve Martus.

“It was a great start, great foot in the door,” he said. “Martus taught me a lot, he’s still mentoring me through this.”

“I just want to bring a different dynamic, bring more energy to the program,” the new Broncos head man said. “And I like to look at myself as a player-coach, too, I like to jump in with them (at practice), get some passes with them.

“But at the same time, I want to teach these kids that there is a certain level of expectation we’ve had here at Alvirne, and we’re hoping to bring it back, you know?”

Vieira-Filho was sad to see his alma mater close over a year ago.

“It is what it is,” Vieira-Filho said. “A lot of the players weren’t without somewhere to go to, a lot of them went to Salem State. I’m excited to have a couple ex college teammates.”

And excited to be coaching soccer as a head coach.

Vieira-Filho isn’t the only new head soccer coach at Alvirne. The Broncos have reportedly hired recent Plymouth State grad Adrianna Kippenberger as their new head girls coach. The Wilmington, Mass. native is fresh off the playing field, having been a defender for the Panthers, wrapping up her college career last fall.

After attending teacher orientation the last couple of days, she was expected to run her first practice late Tuesday.

How’d you like to be Campbell athletic director Jarod Mills? He is on the verge of officially hiring a new boys soccer coach – as of Tuesday, paperwork just needed to make the new hire official – but before that happens he’s been running soccer practice, two sessions daily.

And, to make matters worse, his very capable assistant, Dawn Miller, had to step down from the job as she and her family moved to Florida. So Mills is doing it all – coaching, hiring and doing all the administrative work, for now.

“I fell asleep at 9 last night,” he said chuckling.

He is interviewing for Miller’s position and hopes to have a hire soon. Once he gets the fall straightened out, then he has to tackle two other varsity openings for the winter – boys basketball and wrestling, the latter having a lot of applicants already.

Morgan at Nashua South has suffered a preseason blow already. He was informed recently that last year’s Telegraph Player of the Year, 20-plus goal scorer Alvaro Ramirez, has transferred to Alvirne, due to a family move. “That was tough, it’s a big loss,” Morgan said. It’s unkown whether Ramirez will play at Alvirne…

Football scrimmages will take place next week. Of interest, Nashua North is scrimmaging Hollis Brookline next Thursday, August 23, at Stellos at 4:30 p.m. Nashua South is going to Exeter next Tuesday to be part of a tri scrimmage with the Blue Hawks and Rutland, Vt.at 10 a.m. And Bishop Guertin will be at Alvirne at 5 p.m. next Tuesday for a scrimmage. Remember, the two teams are no longer conference foes as the Broncos have dropped down to Division II. Merrimack will scrimmage a week from Friday at 6 p.m. at Exeter with Exeter and Thornton Academy. Check school websites for other scrimmage events…