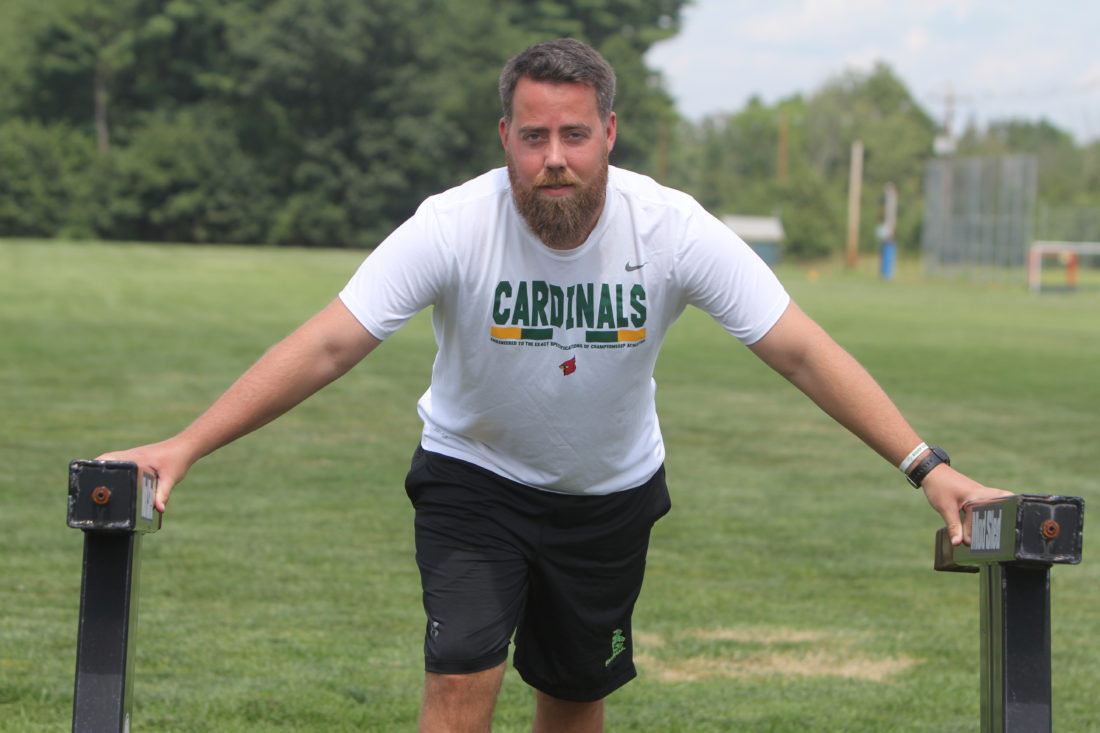 Staff photo by TOM KING The Bishop Guertin practice field may have been empty this past week, but it will be filled with football players under the direction of their new head coach, John Trisciani, beginning Monday.

But he’s wondering if he really had a summer. In past years, as a high school football assistant and teacher, he could enjoy time off until reporting day.

“It was spent much differently than it has been in the past,” he said with a chuckle. “Just trying to prioritize the things that are important. But it’s been interesting.”

The former Manchester Memorial and Plymouth State standout, though, had a little head start, as he was hired in mid-January to take over for Jeff Moore, who stepped down after three seasons. And, to also help, he’s a full-time physicaly education teacher at the school, the first head football coach in the building full-time since former Cardinal coach/athletic director Tony Johnson’s last season in 2009.

Trisciani wasn’t on any long quest over the years to get the Guertin job, but after 10 years as an assistant, he was hoping to land a head job at some point. But he didn’t anticipate that BG would become available.

“I’d been coaching high school football right out of college, and you learn so much,” he said. “You have a vision; you learn how to handle kids, how you’d like to do things. I’d like to think that as an assistant I was always supportive of the head coach that was there (wherever he’s coached).”

Trisciani did his research on the Guertin job, research that was easier because, well, he works at the school.

“It’s a challenge if you’re not in the building,” he said. “But when this job opened up, being in the building, talking to coaches I’ve looked to for advice and confided in in the past. They said don’t let an opportunity like this pass you by. It was one of those things where the timing might be right. I gave it a lot of thought.

“I thought about the kids and I felt there would be nobody better to take care of them than me.”

When he took the job and began putting a staff together, he reached out to a couple of respected teachers at the school – Joe Williams and Todd Therrien — and also a couple of alums, Scott Dolan (played and won titles playing for Johnson) and holdover from last year, Ken Eaves He wanted the players to have a sense of community and familiarity, as well as restoring some traditions he thinks may have been lost in the coaching changes.

“They have an added investment in the school,” Trisciani said.

And an investment in a program that, despite two playoff seasons under Moore, fell to 1-8 last year and has seen numbers continue to decline.

So there’s a challenge.

Of course, when Trisiciani was considering the BG chance, he confided in his father, also named John, longtime New Hampshire high school and college football coach (now an assistant at Saint Anselm).

“He’s probably the one I talked to the most,” Trisciani said. “We joke, he’s ‘The Consultant’. There’s nothing I’m going to deal with here that he wouldn’t have experience at some point. It’s a great resource.

“Certainly having him in my corner made me feel a lot more confident in taking this role on.”

Trisciani thought a long time about taking the job. As a former Cardinal assistant, and also a current teacher in the building, it would seem an automatic thing.

“I think that I’ve seen a lot being an assistant, and you’re on the other side of things,” he said. “You’re seeing the struggles that (the head coach) might be dealing with. And you could say it takes a village. There’s not something the head coach can do alone, or the staff can do alone. There’s a lot of moving parts. You need a supportive principal, athletic director, support system from the parent group, support system with alumni. I think that when you decide to apply for a job but not only take a position, you need to make sure the support system is there. If it’s not there, it makes things difficult.”

Trisciani graduated from Memorial in 2005 as a heralded quarterback and safety, playing for the late Scott McGilvary. At Plymouth, he found himself playing a lot of different positions, and uses that as a teaching tool for his players.

“There were a lot of quarterbacks there, so I played receiver my freshman year,” he said. “I got in the weight room, put on some weight, and maybe tight end may be the best spot. You get to learn other positions as a player. It’s a team game, so where can you best fit the team? You try to instill that thought process with the kids.”

Trisciani knew he wanted to coach, it’s in the family. In eighth grade, he wrote a paper about wanting to be a college football coach.

After Plymouth, he taught and coached as an assistant at Londonderry. Then he moved on to be an assistant under Justin Hufft at Goffstown, perhaps the most valuable job he’s had. “I learned more in that one year with him than I’ve probably learned anywhere,” Trisciani said. “He’s a great coach.”

There were two different stints as an assistant at his alma mater Memorial, with a three-year period at Guertin in between working for both Travis Cote and then Moore. He left to go back to his alma mater because he felt the Crusaders needed his help.

But now he’s the main man at BG.

“The school in general, I have a lot of knowledge of it,” he said. “The importance of academics, trying to build the student athlete, you don’t have the behavorial problems you may have at other places. The parents are invested. I really enjoy the kids in the school … There’s a lot of perks to it.”

Adding to the head start is the fact he knows the players; he’s already developed a lot of relationships with the kids and has evaluated them.

“Having a relationship with those kids, it’s made it easier to coach them, work with them in the weight room in the off-season,” he said. “You have to build that trust.”

Trisciani teaches primarily weight training and health classes, so it’s no surprise that the off-season program in the weight room was, in his mind, the best participation he’s seen since he’s been a teacher at the school (for five years).

But here’s the thing: Guertin’s football issue, many feel, has been numbers and too much sport specialization. Trisciaini knows all of that. When he was hired, he came up with a number of 65 kids he felt would make the program competitive.

He has 38 from last year’s team eligible to return and have fit with over 50 with equipment. “And I’m hoping for more,” he said. “I don’t know if we’ll get to 65, but I hope we can get close to that as possible.”

He knows the specialization is a problem he has to deal with. Despite Guertin’s smaller enrollment than other Division I schools, “It’s my opinion we have the student athletes in the school to be competitive. But they’re not necessarily playing football. I’m trying to encourage those kids to come out, trying to let them know I’ll take care of them.”

He’s confided in other coaches at the school, including boys lacrosse coach Chris Cameron, whose program has supplanted football over the last decade or so as the school’s athletic drawing card. “I was able to ask him a lot of questions as to how do we try to build this thing,” Trisciani said, “because he’s done it. He’s set the blueprint for it.”

Trisciani has been in constant communication with the administration as to what he can and can’t do to attract players. He knows it takes help from other departments, including admissions – once a deposit is put down, he can communiate with the prospective freshmen.

What kind of a head coach will John Trisciani be?

“I think that’s to be determined,” he said, smiling. “One of the pieces of advice my Dad gave me a long time ago is ‘Coach to your personality.’

“There’s going to be times when you have to get on certain players to motivate them and get them to reach their potential. But we’re also going to have some players here that we really need to take care of, love ’em up and develop them.”

Trisciani looks back at his high school years with great memories playing for McGilvary. “If I can give the kids here anywhere near the experience that coach McGilvary and his staff gave me, I think I’ll be pretty happy with the results.”

What’s Monday going to be like for him? The last few days he’s been thinking about it a lot. Does he give the players a pep talk? Does he make a big presentation?

“I think what I’m going to do is try to be as honest with them as possible with the expectations,” he said. “Be transparent with them, let them know why I’m here, and what we’re trying to accomplish. At the end of the day, I’m here to take care of them – on the field, in the class room. Let them know there’s somebody in their corner they can talk to.”

Teaching at Guertin for five years he’s felt the school’s community feel. He objectively stayed away last fall from delving into any of the problems the Cardinals were having. “You want to be respectful to the coaches who were here,” he said. “So I tried not to ask questions, and certainly kids would want to talk and have conversations. I tried to set a fine line. I knew the coaches on that staff, and they were some good coaches. Jeff is as knowledgeable as anybody I’ve been around.”

Then, once he took the position, he sought out ways to try to build upon last year’s issues. He did talk with Moore prior to his hiring. “He’s always been very supportive of me,” the new Cards head man said.

Trisciani wants to build a program, no doubt. Five years from now, he says, he’d like to see the participation level at 100. To have the best equipment, making things as safe as possible for the players.

“I’d like to think five years from now, we’d have kids who have been successful in college,” he said. “I’d like to have Bishop Guertin be a must-stop destination for any college coach in the area. … We’d like to build the best program possible. I think the sky’s the limit.”

Especially at a school he has become a huge part of. In summer and fall.