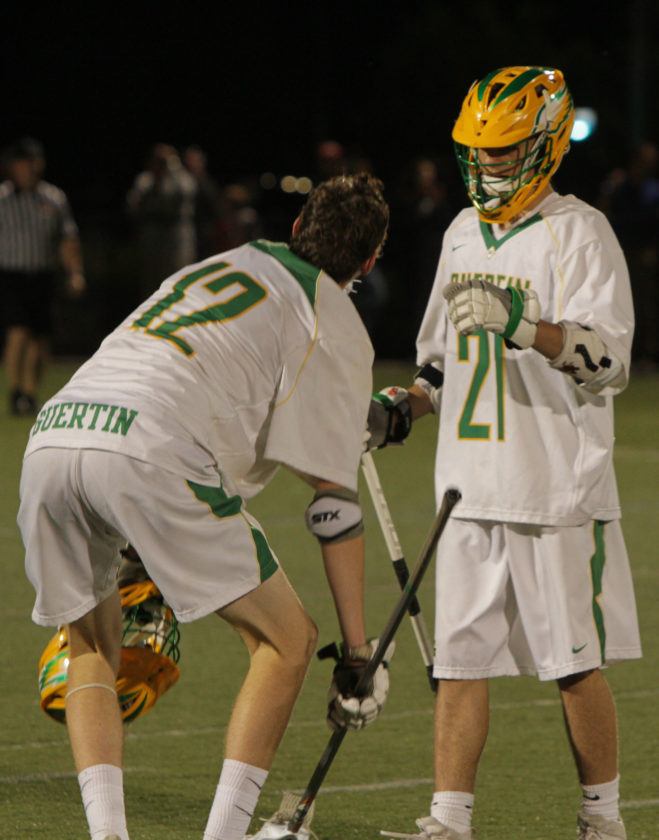 Staff photo by HECTOR LONGO Bishop Guertin's Doug Barker, left, and Steven Bouchard console each other after the Cardinals first and only loss of the season, Saturday night in the state championship game against Pinkerton Academy.

Defeat tasted a little sour Sunday morning for the Bishop Guertin boys lacrosse team. When your a high school athlete, big picture is often not your thing.

But if you were one of the lucky ones at Exeter for Saturday night’s Division I state championship game, a thrilling 11-9 Pinkerton Academy victory, you understand where this group of Cardinals – heck this entire Chris Cameron-coached era – stands in the history of high school sports, not just in New Hampshire but all of New England.

Like no other sport imaginable, lacrosse has come to the forefront in New Hampshire. It is now the state’s athletic calling card.

That field Saturday night was littered with scholarship athletes. Were there 15? Maybe 20?

When is the last time any collection of athletes from two teams matched that kind of talent in any sport?

From North Carolina-bound Brian Cameron on down, as much as a of war that it was, it was a celebration of skill and athleticism.

The passing, the shots, the pin-point accuracy, the fearlessness.

It was a 48-minute advertisement for the game, one for the ages.

“We both go down to Massachusetts and do pretty much what we do down there,” said Pinkerton coach Brian O’Reilly, perhaps the most pivotal founding father of the game in the Granite State.

“We’re the equal of any team in Massachusetts, and that’s just the way it is.”

Sorry, coach. You couldn’t be more wrong. Right now, your two programs are superior, not equal, to anything Massachusetts can offer.

BG battled the Bay State’s best through the spring, going 6-0. The Astros were 4-1.

Eight of the 10 wins were against teams in the Boston Globe Top 20.

You have to go back decades to find a time that a Granite State sport has had such an impact regionally or maybe even nationally.

Was it John Fagula’s Nashua High girls hoop dynasty? Was it the track/cross country dominance of Londonderry’s John Mortimer and Helena Kimball and Pinkerton’s Matt Downin?

The Pinkerton/Guertin lacrosse rivalry is as good as it gets. Just ask O’Reilly.

“We understood they don’t take us seriously,” said O’Reilly after the win, pointing out succinctly that his team moved to 4-4 in the last eight against BG and that the two programs have split the last four state titles evenly.

“We hang with them every single time. Somehow, some way, we’ve gotten their vibe that we’re just lucky to be on the same field that they’re on all the time … Probably perceived, but I’ll be honest, it gnaws on us. It’s something we talked about before the game.”

O’Reilly knows there is a mutual respect, too. He certainly heaped praise on Cameron for what he has done for the game.

“We were always there, before Chris got to BG. We’ve been beating people for years,” said O’Reilly. “They showed up in the early 2000s and just tilted the whole thing, it made us better.”

Guertin and Pinkerton need each other, for the greater good.

“We’re better now than we were back then,” added O’Reilly, whose program now owns 11 state titles.

This is not news. BG and the Astros have been playing at a high level now for decades. But the rest of the state has noticed, too.

Programs are rising. Exeter had the Astros on the ropes early in the semifinals. This drama, as the huge crowd can attest, is infectious and entertaining all at once.

“Mike Tyson said everyone has a plan until somebody punches you in the mouth, that’s pretty much what it was all about.”

Hector Longo can be reached at hlongo@nashuatelegraph.com and 594-1253.