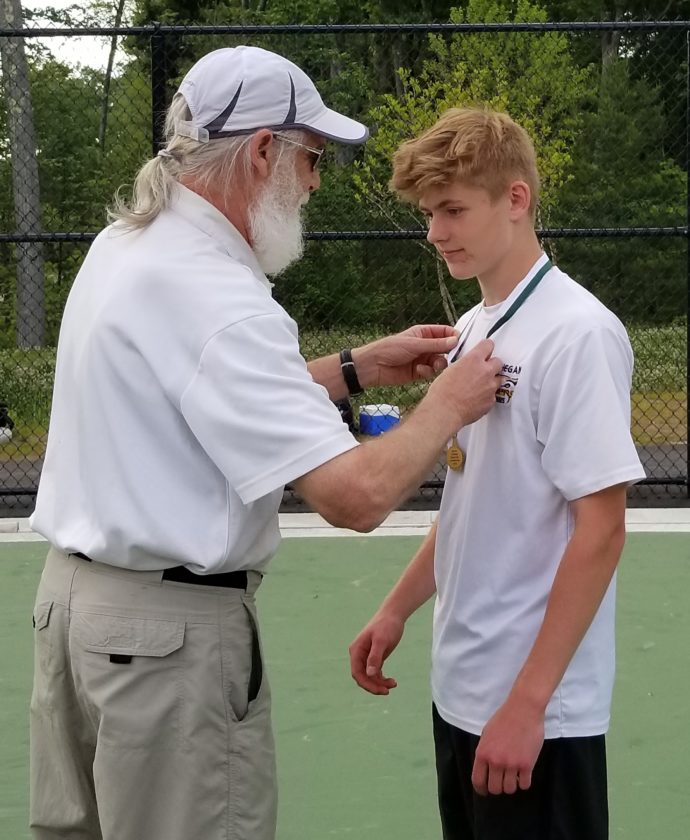 Staff photo by TOM KING Souhegan's Matt Lapsley is presented with the state singles championship medal by his coach, John Kilgore, on Saturday at SNHU.

As a matter of fact, it’s great.

He had hoped for the tennis triple crown – team, singles and doubles – but he and Sam Goddard fell in the doubles finals back on Thursday. The Sabers had captured the team championship nearly two weeks ago.

But this one? This one may have been the best – and toughest – of all.

“I’ve just been training for this every since I was a young kid,” Lapsley said. “Just kind of knowing I was ready for this. It’s exciting.”

Lapsley, who will be attending the University of Illinois-Springfield next year to play tennis, struggled with his serve most of the day, even in his 6-4, 6-3 win over Pinkerton’s Seb Tonini in the semis.

But the finals was a match of several service breaks for both he and Yerram. He won three big service points in the first set tiebreaker, but also had four breaks, and jumped out to a 4-0 lead.

And in the second set, trailing 3-2, he broke to tie, served in perhaps the match’s biggest, and longest game to grab the 4-3 lead, and finally survived on service despite not being able to take advantage of not one but four match points before finally ending it.

“I tried to say in it,” Yerram said of the two marathon games. “He made a few good shots. I don’t know, I guess he had the better mental toughness of the day. Well-deserved, though, he played really well.”

“Lot of guts,” Sabers coach John Kilgore said. “He had to be up 2-1 in the ground stroke game. This is his fourth year trying.”

That’s what made this special. Lapsley had to withdraw during his freshman year with an injury, and lost in the finals his sophomore year and semis last year.

“I felt good about my return all day,” Lapsley said. “I think he only held (serve) once. I never felt a ton of pressure I guess, just nervous.”

In the first set, he was confident, as he got a service break to help force the tiebreaker. “I was thinking I was ahead in the whole set, and it was still mine (in the tiebreaker),” he said.

The key game of the second set was the seventh, a marathon that went to deuce five times before Lapsley fought off a couple of Yerram’s forehand winners.

“It wasn’t my best match,” he said, “but I pulled through in the end. At that point, we had played for an hour, 15. I knew he was getting tired and I kept working and kept getting every shot back that I could. I knew that if I could make him hit that one extra shot, or come in on his backhand, I’d come out on top.

“This is very fullfilling.”

It wasn’t a victorious day for the two Bishop Guertin girls, Claire Reynolds and Amy Maalouf, who made it to the semis, but still an accomplishment nonetheless. Maalouf fell to top seed and eventual champion Syndey Herrington of Bishop Brady, 6-0, 6-0 while Reynolds for the third time this season to Bedford’s No. 3 seed Carley Citron, 6-3, 6-4. She tired in the second set to fall behind, but rallied to trail just 5-4 before coming up short.

“At that point she realized, it was win or go home,” Cards coach Barry Ndinya said. “She went for her shots even more. Then Carley decided ‘OK, I’m not going to make any mistakes.

“But it was good for the program. Amy, as a freshman, was playing with house money at that (semifinal) point. Overall I’m happy.”

Herrington, who is going to play ice hockey, not tennis, at Northeastern, beat Citron in the finals, 6-0, 6-3.