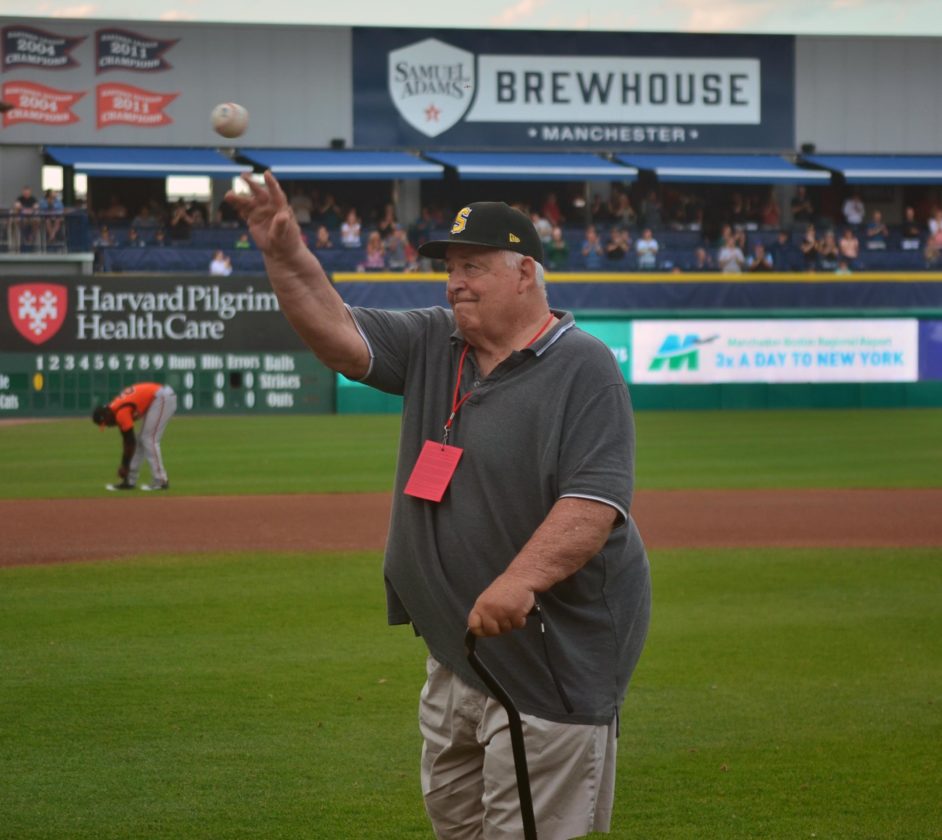 MANCHESTER – If there is one name synonymous with New Hampshire high school baseball, it’s Bill Dod. This spring he completed his 50th and last season coaching in the Granite State, with a wide array of well-wishers coming together to honor him at Saturday’s New Hampshire Fisher Cats game.

Mike Beliveau, Dod’s assistant coach for the past 27 years and former Souhegan football head coach, spearheaded the event’s organization over the past several months.

Beliveau expected around 75 people from Dod’s past and present to arrive at Northeast Delta Dental Stadium to pay tribute, but over twice that many well-wishers came to the ballpark’s left-field pavilion to share memories and watch the sport that Dod taught so many students.

At first, Beliveau considered an alumni game at Souhegan, eventually realizing something bigger was needed to honor such a local legend.

“I really wanted to do something special and it had to be at a baseball game,” said “I’ve enjoyed organizing (the event), this has been a great night for Bill.”

Dod accumulated 282 wins at Souhegan, with 267 more combined wins earlier in his coaching career at Sanborn, Bishop Guertin and Milford.

He’s one of only three coaches in New Hampshire high school baseball history with more than 500 wins, but success was only a small part of what made Dod so memorable to his peers.

Hanover athletic director Mike Jackson has known Dod since coming to New Hampshire in 1986. Jackson is also retiring this year, and throughout his career he’s seen his relationship with Dod fluctuate from opposing coach to administrative colleague. But since he’s known Dod, Jackson has held the Sabers legend in high regard for the respect for baseball he’s imparted to generations of players throughout the state.

This spring, Hanover eliminated Souhegan in the NHIAA Division II Baseball Tournament, Dod’s final game at the helm and one of many games between the rival schools over the years. But Jackson remembers not only those matchups, but also the many times Dod helped baseball players beyond those on his squad, including invitations for Hanover players to join Souhegan to spring training trips in Florida.

“I think he and I are very good friends, but more importantly I’m a fan,” said Jackson on Saturday. “From a baseball standpoint, there’s the whole victory thing, but beyond that, he teaches his kids to respect the game. They come in loving the game, but they always respect the game as well. All you need to do is watch his kids play.”

One of those kids was Guy Tino, a 1999 Souhegan graduate and current owner of the Northeast Café in New Boston.

Tino had Dod as a coach, but also as a teacher and mentor that helped impart important life lessons.

“He looked at the big picture, not just how you were doing on the field, but how doing in regard to your wellbeing,” said Tino on Saturday. “I attribute a lot of my success to his foundation.”

Whoever takes the reigns for at Souhegan will have big shoes to fill both with the Sabers and in the world of NHIAA baseball, but he leaves confident that that role will be filled and leaves grateful for all the help he’s obtained in filling that role for this long.

“It’s hard to believe I started coaching 50 years ago, the years have just flown by,” he said. “I’m very fortunate to accomplish everything I’ve accomplished and those accomplishments have come thanks to a lot of great athletes and great assistant coaches.”