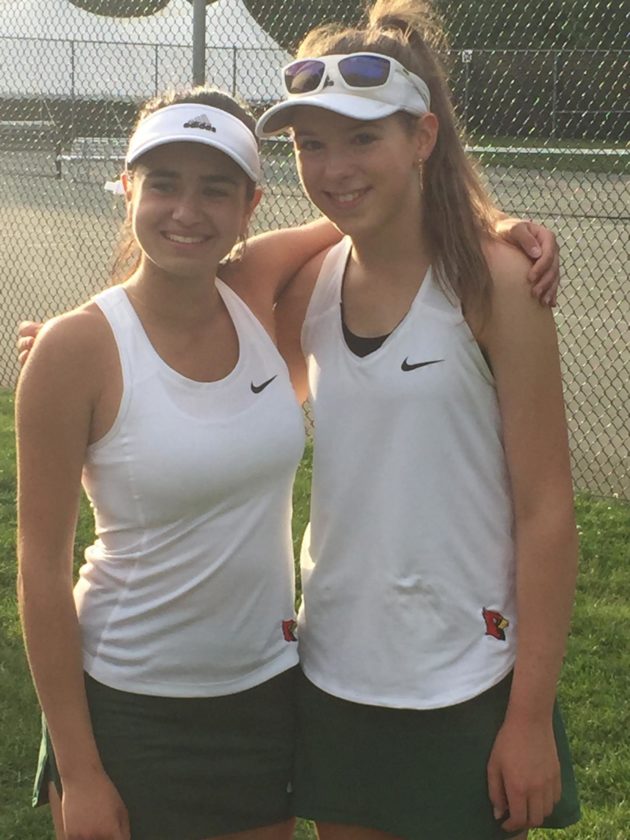 Courtesy photo Bishop Guertin's tandem of Amy Maalouf, left, and Claire Reynolds are all smiles after winning the state doubles championship on Thursday.

The area took one out of two in the state high school doubles tournament on Thursday at Derryfield School.

However, the Souhegan boys doubles team of Matt Lapsley and Sam Goddard, seeded second, fell for the first time all season, bowing to Bedford’s No. 1 seeded duo of Rohit Yerram/Jason Boucher, 6-4, 6-3.

“They were being very aggressive, it carried over, Bedford could never adjust,” Ndinya said.

“It also worked in the finals. They had nothing to lose. They knew Sydney was going to come out and play real hard, so they got even more aggressive. And it worked.”

Meanwhile, the finals loss for Lapseley/Goddard means that Lapsley won’t be able to capture the coveted tennis triple crown (team, singles and doubles titles). He goes for the singles crown on Saturday at Southern New Hampshire University.

Yerram and Boucher got two big service breaks, one in each set, that made the difference.

“It was probably the best doubles match I’ve seen in high school tennis,” Souhegan coach John Kilgore said of Thursday’s boys final. “The quality of shot making was excellent, the strategies were flawless. Bedford owned a few more shots than Souhegan, allowing them to close out each set.”

In the semis, Lapsley and Goddard cruised past Pinkerton’s fourth ranked tandem of Seb Tonini and John Marineau, 6-1, 6-2.

Reynolds and Maalouf will also be competing in the state girls singles semis/finals on Saturday, also at 2 p.m. at SNHU.