Things get away from Warriors early in 9-4 semis loss 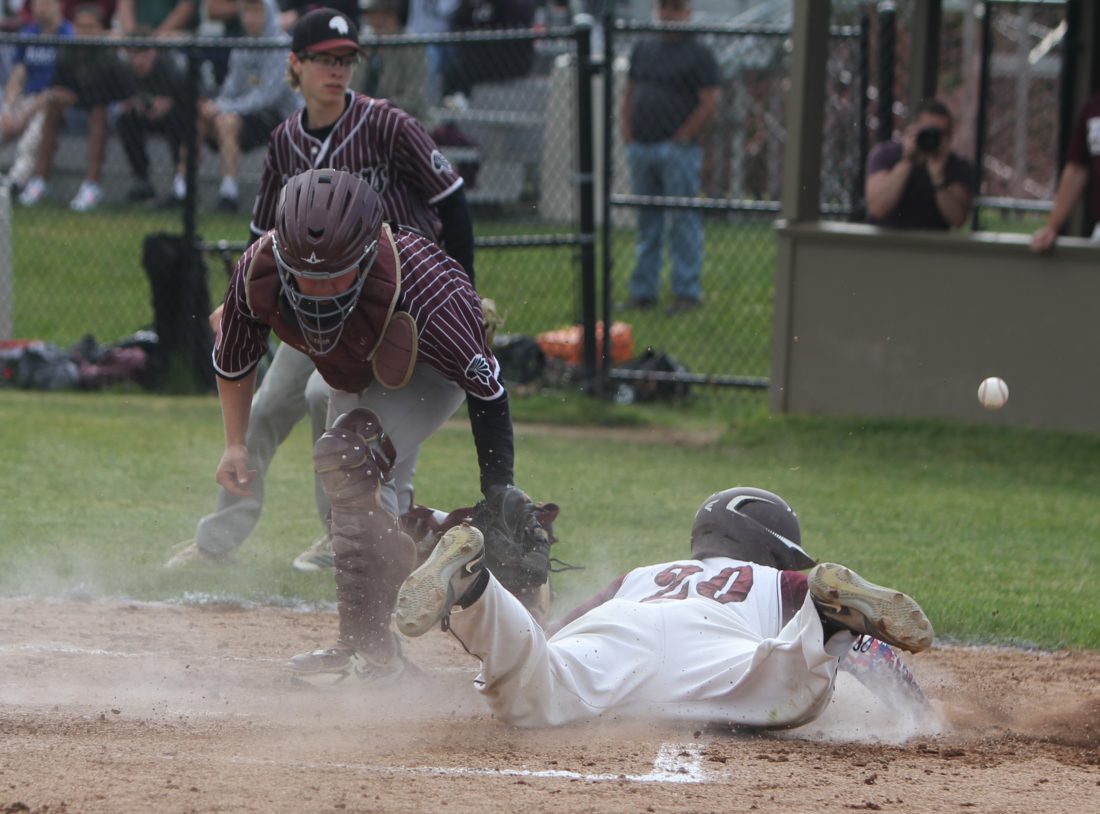 Staff photo by TOM KING The ball gets by Wilton-Lyndeborough catcher Owen Hughes as LIttleton's Scott Ridlon scores during the Crusaders' 9-4 win over the Warriors in Wednesday's Division IV semis in Laconia.

LACONIA – Wilton-Lyndeborough High School baseball coach Dave Finch sat down with a down Warriors starting pitcher Neal Brennan after their team’s 9-4 Division IV semifinal loss at the hands of No. 2 Littleton Wednesday and told him not to be discouraged.

“He’s hanging his head,” Finch said. “And I told him, ‘Neal, you didn’t walk batters, you didn’t hit batters. They hit you. There’s nothing you can do. Tomorrow you play them and they may not hit you. That’s how it works.'”

But nothing worked the first couple of innings at Robbie Mills Park for the No. 3 Warriors, who had an otherwise superb 16-3 season, after which the Crusaders had powered their way to a 9-1 advantage.

Scott Ridlon’s sac fly and Danny Kubkowski’s two run double made it 3-0 in the first.

But the biggest blow came two hitters later after Derek Walker’s two run double in the second. It was a grand slam to left center by Littleton senior Quintin Ross, just his third homer of the season, and that was it for Brennan, who was replaced by his younger brother Sean.

“We got on them early,” Crusaders coach Anthony Bray said. “That was our goal, to get a big lead early and then hold them off.”

Littleton (seven hits) only had one hit the rest of the way and the Warriors, didn’t go down without a fight. Sean Brennan had driven in a run in the second to make it 3-1, Jake LeVert drew a bases loaded walk in the fourth (9-2), and they got two in the fifth on Sean Brennan’s sac fly and Kyler Tremblay’s RBI single.

It could have been more but Crusaders center fielder Parker Paradice made a diving catch on Brennan’s sac fly or two more runs would have come in.

“After the second inning it was really a 4-1 game us, after they pounded us,” Finch said.

Bray mixed and matched his pitchers with some unusual strategy. He started senior ace Derek Walker, but had junior Nick Sanborn come in to start the third. Then, when Sanborn got into trouble in the fourth, he brought Walker back in to finish the inning, and then Sanborn again in the fifth. However, Bray settled on senior Lucas Bray to finish the last two innings. He caught pinch hitter Zach Robillard looking with one on in the seventh to end it.

“Those were our three pitchers most of the year,” Bray said. “That was the plan going in. Try to keep them off balance.”

Sean Brennan, an eighth grader, gave up an inherited run in the second and pitched scoreless ball the remaining four innings, but the damage was done. At 6-0 on the year, he had thrown 89 pitches Saturday so Finch went with junior Neal (5-2), who had tossed just 39 in the prelims.

Bray admitted this was one of the Crusaders’ better days hitting.

“Especially in the playoffs,” he said. “To do it here, we’ll take it.”

“I told them, we went 16-3, that’s nothing to complain about,” Finch said, as the Warriors went the furthest in the tourney since 2004. “We’re happy with our year. Today? That’s (Littleton) a good team out there.”

They were for two innings, and that’s all it took.