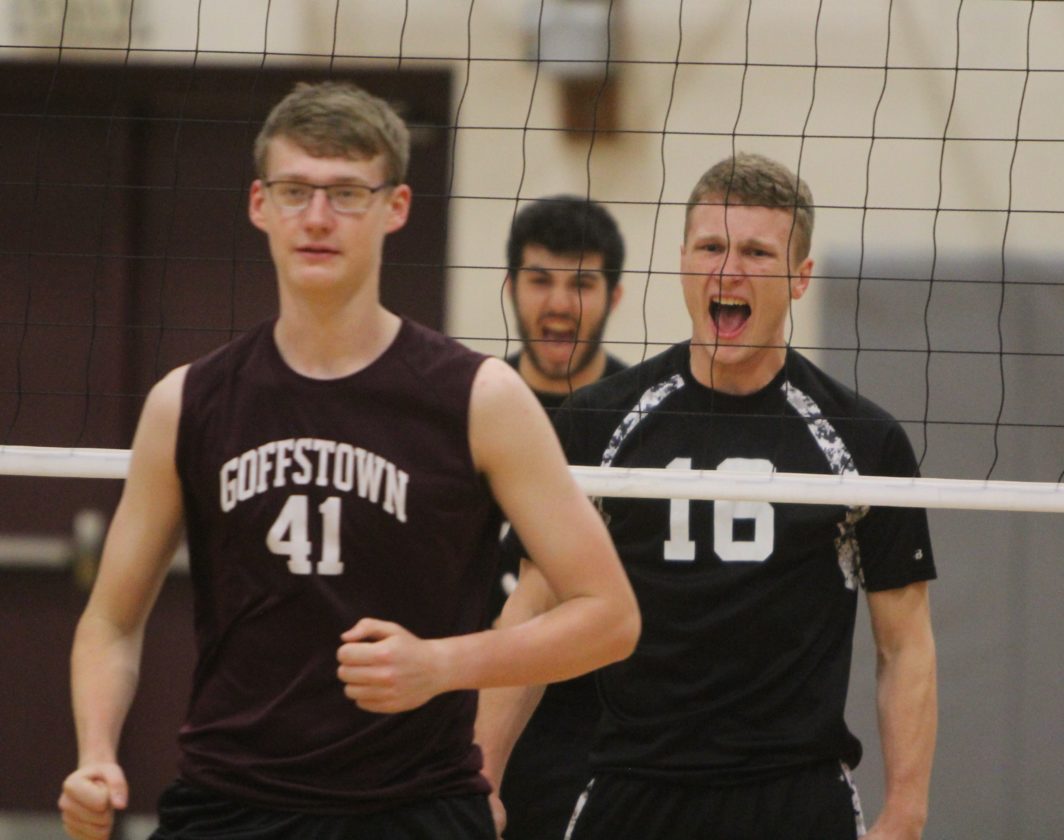 Staff photo by TOM KING Hollis Brookline's Matt Simco celebrates a point but it doesn't seem to bother Goffstown's Ryan Peace much, but the Cavs ended up sweeping the Grizzlies 3-0 to advance to the boys volleyball semifinals.

After all, the stakes were pretty high, a berth in the Division I semifinals. It’s almost a given the Cavs will be their on an annual basis, and this year is no different as they coasted, 25-18, 25-15, 25-13 over the young Grizzlies in the quarters.

“We came into the season not really knowing how far we were going to get because we had a lot of new guys,” said All-State outside hitter Jonathan Brackett, who led the Cavs with 20 kills to go with 13 digs. “We kept winning games against good teams. Our goal has to be to get to the semis, even the championship, so it means a lot.”

Those good teams included top seed Timberlane, but not Pinkerton, who beat the No. 3, 13-4 Cavs 3-1 in the season opener and will see them again in Thursday’s 5 p.m. semis matchup at Nashua North.

But ironically, the last team to beat Hollis, winners of nine straight now, was Goffstown back on May 4. You never would have known it Tuesday.

“We made some changes halfway through (the season),” HB coach Ed Leonard said. “We then caught fire, went on a roll. They just believed in themselves and got better.”

Hollis led early in every game and never let the Grizzlies get hope.They jumped out to an 11-5 lead in the first set, and used an 9-3 run to take control after Goffstown closed to within 15-14. It was 11-6 in the second set and 7-2 in the third, and the Cavs stayed in control in both.

“We have a very young team, and I think the nerves got the best of us,” Goffstown coach Melanie Gerrior said. “We couldn’t set up an offense. … It got into their heads, too, making silly, silly mistakes. We never do that.”

And it was tough to play from behind.

“We talked about that,” Leonard said. “They’re a young team, they’re going to be really good going forward, you could see a lot of nerves. My guys have been here, and I told them ‘Just relax, start strong.'”

But that wasn’t nearly enough. Now the Cavs will see if their roll is for real when they face the No. 2, 15-3 Astros.

“I’ve got four guys who have never touched a volleyball,” Leonard said. “It just took them a while to make it all click.”

It clicked on Tuesday, for sure.