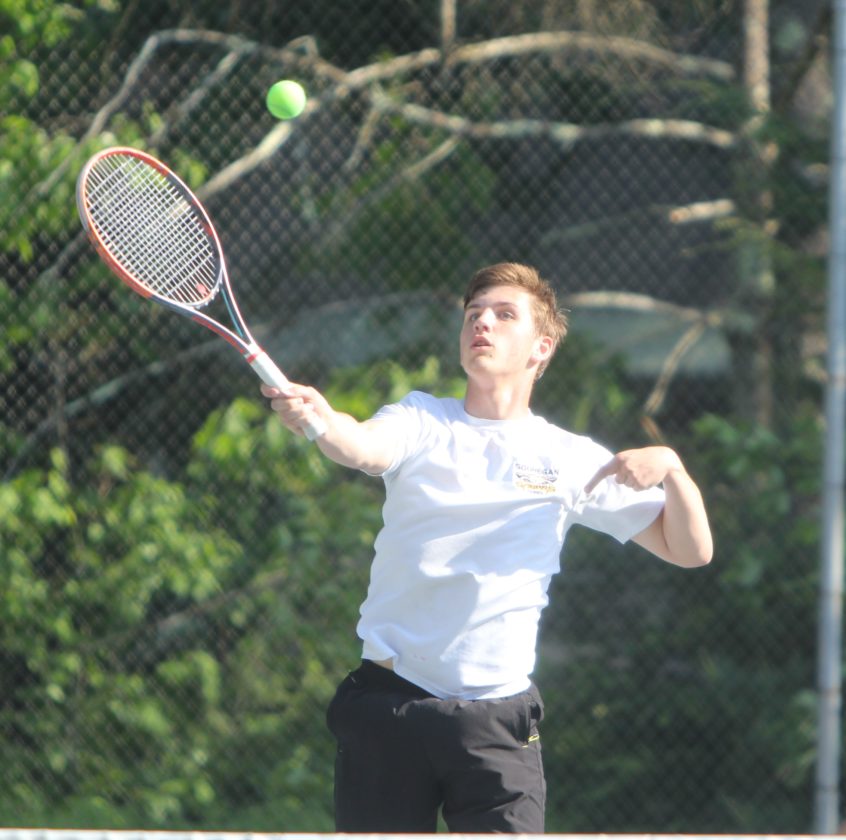 Staff photo by TOM KING Souhegan's Kyle Gibson reaches up for a shot during his 8-4 win at No. 3 singles in the Sabers' 7-2 semifinal triumph over Portsmouth on Thursday in Amherst.

Yes, it will be an all-local Division II final, as Lapsley and rest of his Souhegan boys tennis teammates dispatched Portsmouth, 6-3 in the Division II semis. The unbeaten Sabers will now renew acquaintances with the Cavaliers, who beat St. Thomas 9-0 in the other semi, in next Tuesday’s title match at 4 p.m. at Bedford High School.

“It feels so nice to finally win in the semis and advanced to the next round for the first time,” said Lapsley, who remained unbeaten with his 8-2 win over the Clippers’ Ryan Porter at No.1 singles. “We’ll see what we can do.”

The Sabers have done everything they can do to get there, now 15-0 on the season with Lapsley losing only a handful of games all year.

“That’s the first time we’ve ever beaten Portsmouth in singles,” Sabers coach John Kilgore said. “I’m surprised it happened today because things were so close down (on the ladder).”

Kilgore gave Estes a pep talk and that seemed to turn the match completely around.

“John told me to focus and I just started playing better, and he (Bloom) started making more mistakes than me and that’s how I won,” Estes said. “It feels really good (to make the finals). It’s the first time and this is my third year on the team, so it’s awesome.”

“It was his best match of the season,” Sabers coach John Kilgore said. “He likes to play the better players.”

As for Dodge, a 9-7 win in the quarters on Wednesday, Kilgore said, was a key. “He was so confident, he went out today and played his best match of the season as well.”

With Lapsley’s win and fellow Saber Sam Goddard cruising 8-1 over Jack Madden at No. 2, the Sabers needed just one more singles win to clinch. They got it when Kyle Gibson recorded a couple of key service breaks to top Elliott Danley at No.3, 8-4. Portsmouth’s only win in singles came at No. 5 as Nick Shultz topped Josh Lacaillade 8-5. It was Lacaillade’s first loss of the season.

While this is the first time for these Sabers, it will be Kilgore’s second trip as the program’s coach and the team’s first since that 2009 loss to Hanover. It’s Souhegan’s 12th trip to the finals overall, their last of six titles coming in 2003.

Portsmouth, which won it all three years ago, was hoping for the upset.

“We knew what we had to do, and I felt really strong about our 4, 5 and 6,” Clippers coach Anthony Sillitta said. “I saw those as winnable matches, and it didn’t go our way. We get that, I like our chances at doubles with two out of three.”

But it never came to that. You always count on losing No. 1 doubles to the unbeaten tandem of Lapsley and Goddard, as they cruised 8-0 over Madden and Danley. Portsmouth got meaningless wins at No. 2 (Porter/Clough over Gibson/Estes 8-3) and at No. 3 (Danley/Bloom over Lacaillade/Dodge 8-5).

“There’s no giveaways there,” Kilgore said. “They’re young, they’re getting better. Even here today, there was only a point or two with some of the wins. Not much difference on the court.”

But the Sabers had the difference. As Lapsley said, see you in the finals.