Broncos bounce back to rally past Cards, 8-7 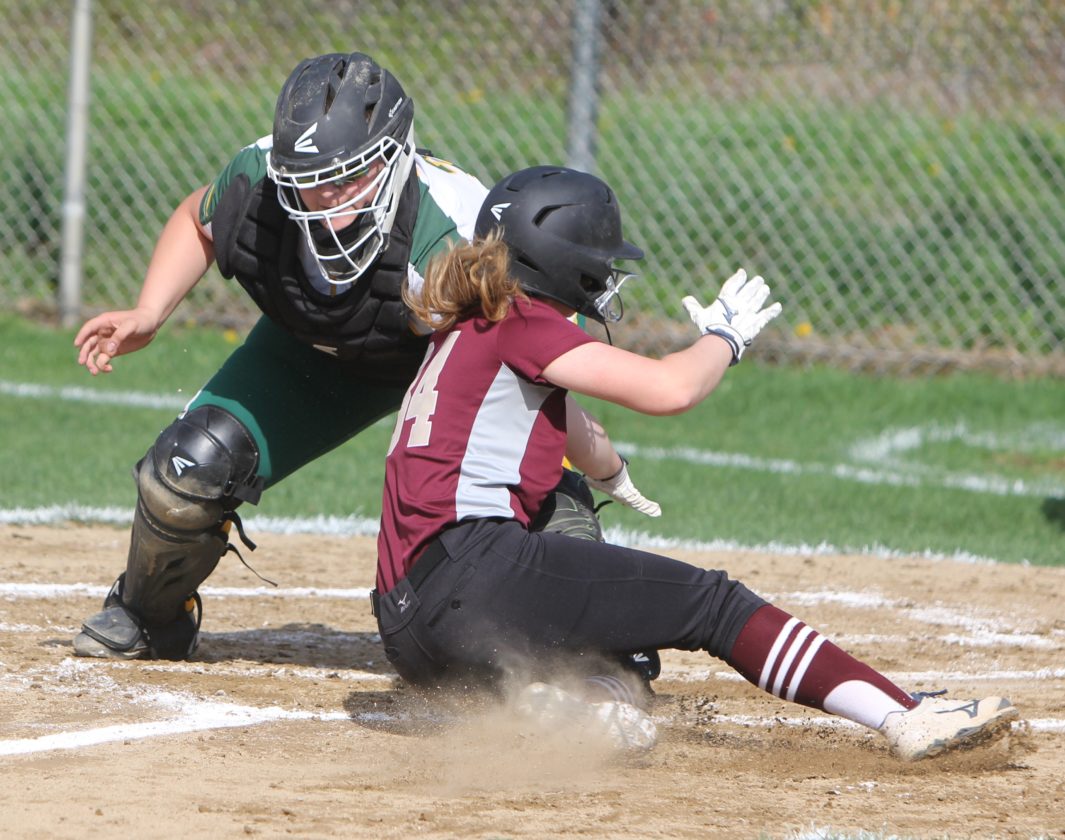 NASHUA – As usual, the Bishop Guertin High School girls softball team had the Alvirne Broncos on the ropes on Monday.

But this time, the Broncos wiggled free and came away with a much-needed 8-7 win at Guertin’s Elliott Field.

“These girls really get along well, and they’re here to pick each other up,” Alvirne coach Sarah Brisk said. “They know we have to play together as a team. That’s how we’re going to win this year. … We did need this game.”

And Guertin needed a lift, having gone 0-9 for the first half of the season while outscored 117-29. Monday was their best game of the season by far, as this young Cards team barely resembles the one that won the Division I title a year ago.

“We’re really, really young, but at the same time one of those teams that’s full of potential,” Cards coach Leah Maciejewski said. “Even though the outcome didn’t end up exactly how we wanted, but those pieces began to push together.”

The Broncos, now 6-4, were struggling a bit with back-to-back losses to Nashua North and Spaulding . And they were facing the prospect of sinking to .500, trailing a winless Cardinals team 6-3 after four innings.

But four runs in the fifth off BG freshman hurler Emma Charron helped do the trick. Four straight hits, including Liz DeRosa’s bloop RBI single, an RBI double by Alexis Charbonneau, and sac flies by Jacey Bryant and Kaliana Secchiaroli put the Broncos in front to stay, 7-6.

Guertin, down 2-0 after one (RBI double by Alvirne’s Haley Peaslee), got two homers by Meredith Basta and Taylor Cushion (two run shot) to grab a 3-2 lead off Alvirne starter freshman starter Megan Jacques in the second, and plated two more in the third (key a Cushion double) and aded another on an errant throw in the fourth to go up 6-3.

However, Brisk had brought in junior Kiara Chase in relief to start that inning, and Chase only allowed two runs in total the rest of the way. The only earned run was Stephanie Coulombe’s solo homer in the bottom of the seventh.

But Alvirne had picked up an insurance run on Alicia Salvalzo’s RBI single in the sixth for an 8-6 cushion, and neede to cash that in as the all-important game-winner.

The seventh, with Guertin getting one run closer, had to conjure up memories of last year’s Cardinal rally in extra innings in the Division I quaterfinals here. But Chase struck out the next two hitters after the homer to end it.

“My pitcher gives up the home run but really beared down and did her job at the end,” Brisk said, “and that was really impressive.”

“Alvirne always has a solid team and we always look forward to playing them,” Maciejewski. “That’s the story with these two teams.”

And this story ended with Broncos getting the last word.