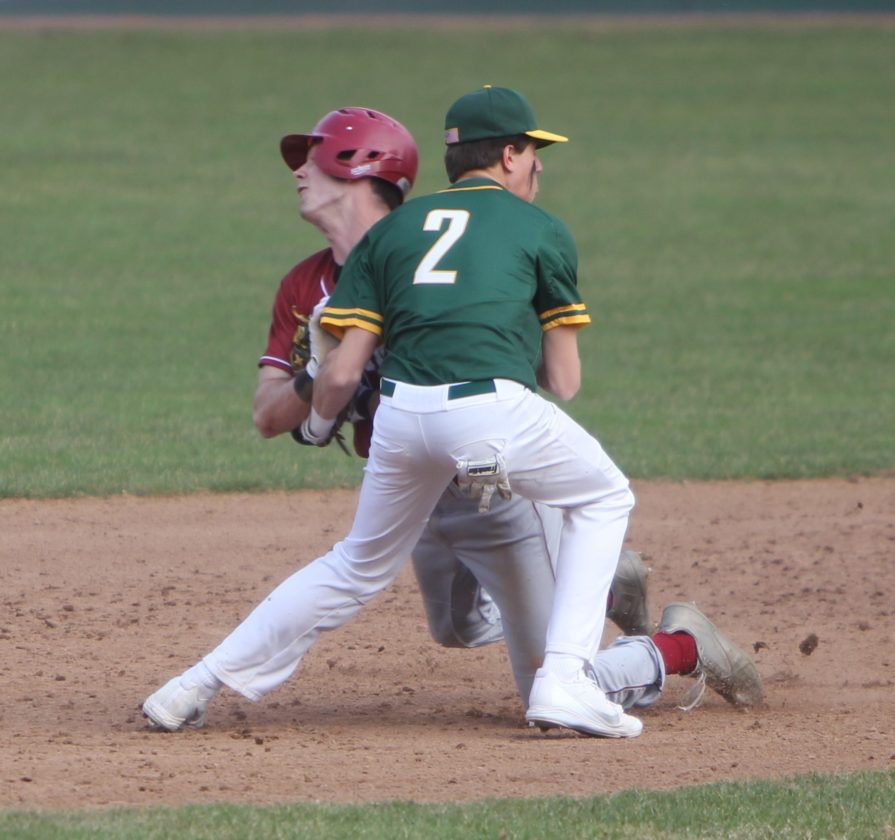 Staff photo by TOM KING Bishop Guertin's Steve McClendon tags out Concord's Adiran Kennedy in a rundown during a botched stolen base attempt in Friday's 6-3 Cardinals' win at Holman Stadium.

“We started 3-0 my first year,” Painter said with a big grin after the Cards used a six-run third inning to top Concord, 6-3, Friday at Holman Stadium. “It’s pretty exciting. Concord’s a good team, it was a good test for us.”

Well, in season No. 8 of the Painter Era, both teams were 2-0 going in and Concord actually grabbed a 2-0 lead in the top of the third on three straight walks by Cards starter Aaron Zabowski, followed by Griffin Gilbert’s two run single.

But Tide starter Eric Sullivan had control problems of his own in the bottom half, walking in two runs, giving up an RBI single to Stephen McClendon, all adding up to his exit and a 3-2 Guertin lead.

But the big blow later in the frame was a two-run single by Guertin’s No. 9 hitter, Tony Gallinaro, as reliever Sean McDonough’s 0-2 pitch was perfectly placed near the left field line to make it 5-2.

“If he stays to that side of the field, a left-handed hitter, if stays hitting the ball to left field he’s going to be really good,” Painter said of Gallinaro. “A ground ball to short is going to be a base hit for him almost every time. He can fly.”

In the same inning, McDonough later plunked Alex George and Sam Boudreau back-to-back to force in a run, making it 6-2. Brett Anderson (single) and George (double) had started the inning off.

“You’ve got to get ahead of guys,” Concord coach Scott Owen said. “These guys can hit (the Cards had five), they’re a good team. … Eventually, they will get to you.”

Indeed, the game needed someone to settle it down. Enter Cards junior reliever Noah Therrien, who hadn’t been the same since hurting his arm freshman year. He struck out eight over 4.1 innings of relief to get the win, and was touched for a run in the seventh (RBI single by Gilbert) after tiring, throwing 72 pitches. He allowed three hits, walking just one. Good thing because McDonough also settled down, retiring the last 10 he faced.

“He’s good, he found the zone, and when he’s down like that, he’s really hard to hit,” Painter said of Therrien. “His velocity was good. He was up to 72 pitches when he finished.”

“For me it’s mentally,” Therrien said. “I’ve been just relaxing on the mound, and just trying to hit the spots my catcher gives me.”

The feeling around this team mirrors that thought.

“It’s a lot better than last year (a 5-15 season),” Therrien said. “This team is really solid. We have good team chemistry, we work well togther and know how we each play because most of us play with each other in the summer and the fall.”

It could make for a great season eight.