Cards start off hot in the bone-chilling cold vs. North 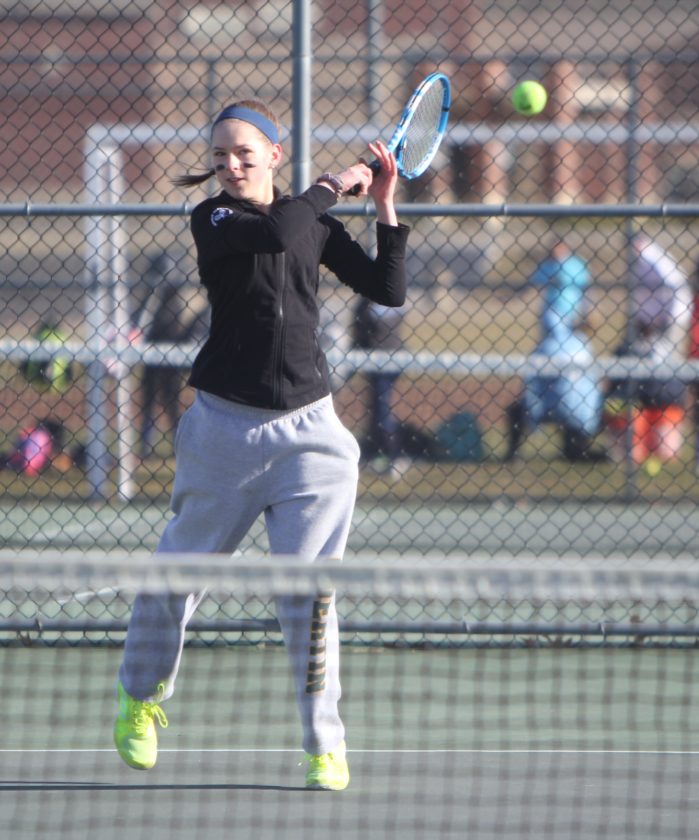 Staff photo by TOM KING Bishop Guertin's Claire Reynolds fires a return during the Cardinals' 9-0 win season-opening win over Nashua North in the chill on Thursday.

First, try to stay warm in the bitter cold and wind. Second, heat up against Nashua North, which the Cardinals did to the tune of a 9-0 win at North in the season opener for both.

“It was very tough,” Guertin coach Barry Ndinya said of the conditions. “But we handled it well. We had a good game plan, and it worked out. “The game plan was to be consistent because it was windy, keep the feet moving, and have lower tosses on the ball.”

The Cards are hoping to go deep into the postseason when things warm up in late May, and many think they can, despite having a lineup of three sophomores and three freshmen.

“He’s got young kids and they’ve all taken lessons,” North coach Bob Viens said of Ndinya and the Cards. “Really sound fundamentally. They’ll be good for years to come.

“I have two seniors then all freshmen and sophomores, but none of them have any tennis background.”

Yes, clearly two teams in different places. It was over quickly, as five of the six singles were done within a half hour, with Nos. 3 through 6 on the ladder all winning 8-0. Guertin’s top player, Claire Reynolds, topped Brenna Rose 8-1. In the best match of the day, North’s Liz Dion played tough at No. 2 singles before falling to BG’s Amy Maalouf, 8-4.

“Good depth,” Ndinya said. “Lot of young girls, lot of freshmen, but they did well. (Claire) Reynolds has been doing well, she played in a lot of tournements just to get ready for the season.”

It didn’t get any better for the Titans in doubles, as Odel/Tejeda fell to BG’s Liakos/Natalie Sheehy at No. 3, 8-1, and Guertin’s Katelyn Nichols and Gilbertson blanked Titans Bakhit/Laferriere 8-0. The final match of the day saw the Cards’ top doubles team of Claire Nichols and Maalouf top North’s tandem of Rose/Dion, 8-2. That showed how good Guertin’s top duo is, because Rose and Dion had made the semis of Derryfield’s preseason tourney.

“It was a good start to the season,” Ndinya said. “The girls played well. We hope it continues.”