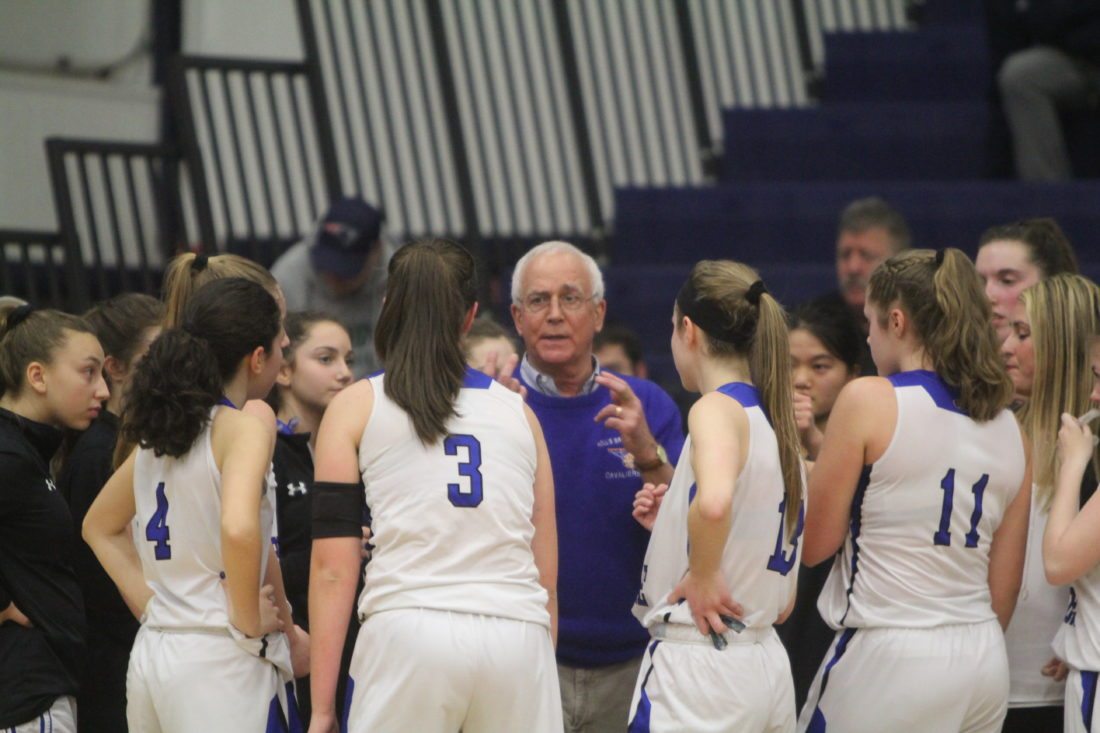 Staff photo by TOM KING Hollis Brookline coach Bob Murphy feels he has a much deeper team going into Friday night's Division II title game than the one that lost in last year's finals.

Now the question is if the Cavaliers can take advantage of it.

Yes, Hollis Brookline, as the highest remaining seed (No. 3, 19-2) remaining in the Division II girls basketball tournament, has returned to the finals. The Cavs have a date with upstart 13th seeded John Stark (12-9) at 7 p.m. at Southern New Hampshire University.

A year ago, HB was the sixth seed, facing the top dog in unbeaten Lebanon, and couldn’t quite get it done. They’ve been pointing to this second title chance ever since.

“You know, it feels really good,” Cavs Brodie Kelley said. “Last year we were all super nervous but now a lot of us have more experience being here. I think that will help us a lot, but we still have to come out and play hard and give it all we have.”

That’s because the Cavs know the Generals will do just that. That’s how they made it this far as a big underdog in three straight games, including a 47-44 semifinal win over Bishop Brady.

Remember, the Cavs were underdogs last year. But this team is different, a little deeper and the scoring wealth is spread a bit more. Sophomore point guard Christina Balsamo directs the offense while her senior sister Joanna, plus Kelley, Elizabeth Bonnette, and center Elizabeth Atkinson can produce plenty of points.

“This team, there’s more weapons,” Cavs coach Bob Murphy said, his team seeking the program’s first state title ever. “Elizabeth Atkinson is a great defensive weapon on the inside, and she changes people’s shots. She’s not a high scorer, but she gets plenty of rebounds. The rest of these kids can all put the ball in the basket, any one of them from any place on the floor.”

And they’re a year older, and wiser.

“We made some mistakes in last year’s game; we’re not going to make those mistakes this year,” Murphy said.

“They have a lot of nice pieces,” Stark coach Bruce Johnson said of the Cavs. “They’ve got the bigs down underneath, some quick guards, they can move the ball up very, very fast and can go inside. We’ll have challenges, but we’ve been dealing with challenges.”

Where did this Stark team come from? They won three in a row late in the season and ended up at 9-9. This is Johnson’s first year coaching the Generals, and he said it took a while to get everyone acclimated to one another.

“We had one of the toughest schedules in Division II, played far more tournament teams than anybody else,” Johnson said. “Most of those games we were in. Then the last few weeks we finally put things together at the right time. Everyone says ‘upsets’, but I don’t look at these as upsets. I think we’re a very good team.”

The Cavs and the Generals didn’t play each other in the regular season, so both coaches got a look at one another during their respective semifinal games.

“Very patient offense, they’ve got good size, and everybody can handle the basketball,” Murphy said of Stark. “They try to attack the basket along the baseline. They don’t have a small kid, and they’re all potential good rebounders.”

The Generals seem to follow the lead of their scrappy junior point guard Autumn Nelson. Nelson only had six points but had 11 boards in the semifinals. “We’ve drilled her hard every day in practice,” Johnson said. “She’s got a great basketball IQ.”

So do the Cavs, and they also have a good memory, hoping the second Finals time will be the charm.