HB’s Balsamo sisters hope to celebrate a title together 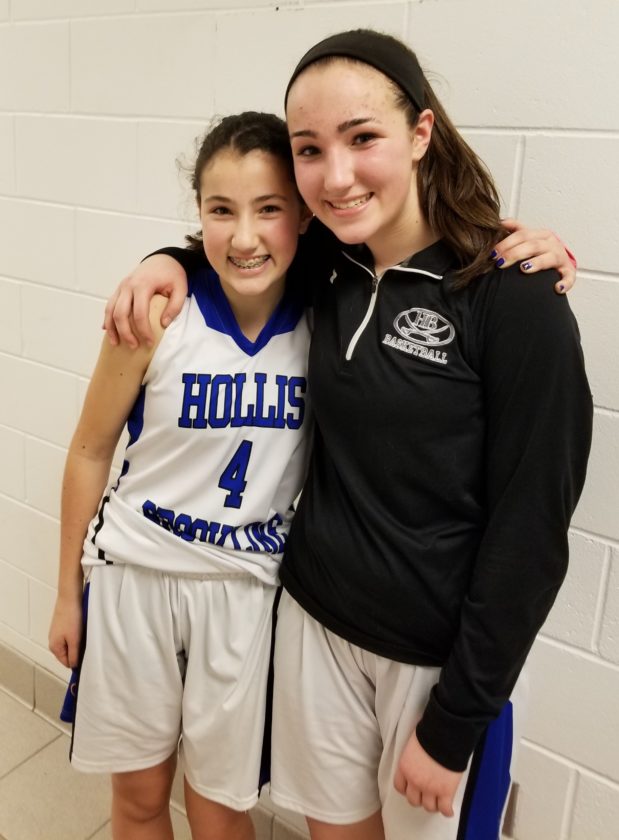 MANCHESTER – In the fall, the room will be all hers. Well, sort of.

Joanna Balsamo will be leaving for college, and younger sister Christina likely has redecorating plans.

But to be sure, the sisters will definitely miss one another.

“I’m definitely going to live at college and get that college experience,” Joanna said, saying she’s going to study nursing at likely either the University of New Hampshire, University of Vermont, or nearby Saint Anselm College. “But it’s going to be very tough. I think of her like my best friend. We do a lot together. It’s going to be a big adjustment.”

The one big thing they hope to do together on Friday night at Southern New Hampshire University is win a state Division II basketball championship for Hollis Brookline High School. Christina is the Cavaliers 5-5 sophomore point guard, averaging around five assists a game, and often feeds her older sister. Joanna is the Cavs’ lone senior on the team, averaging a double-double (16 points, 10.5 boards) per game.

The No. 3 19-2 Cavs will have to beat a spunky 13th seeded John Stark team to do attain their goal. Last year in the title game loss to Lebanon the Cavs were the underdogs. This year they will be the favorites.

“This year we want to capitalize on what we started last year,” said Christina, who played only sparingly as a freshman. “It would be even cooler to do it this year with my sister.”

“They’re the closest sisters I’ve seen in a long time,” Hollis Brookline coach Bob Murphy said. “They’re almost like a set of twins. They look for each other on the court, they know each other’s moves on the court. But big sister protects little sister. If you’re looking for a best friend, that’s the type of kid you want, either one of those kids. And I’m talking to the parents, and they say that’s the way they are all the time. … But the two sisters are the tightest kid I’ve had in a long time.”

It’s clear that to beat the Cavs, you have to handle the Balsamos. Christina had four points six assists in the semifinal win over Hanover while Joanna had 14 points and 13 rebounds.

Joanna Balsamo, at 5-foot-8, is arguably one of the better players in Division II. “She’s got the longest arms I’ve ever seen for a kid like that,” Murphy said. “She could be under the basket, going up against six footers, and she’ll be getting the rebounds. She also uses her body well under the basket for offensive rebounds and put-backs. And she’s got a nice outside shot, but we’re not using her outside as much any more, because we’ve got some nice other outside weapons.”

As for the 5-5 Christina, “she can handle the ball better than any point guard I’ve had in a long time,” Murphy said. “She sees the court because her heads always up.

“She runs the show when she’s in there. She sees who’s open, who’s not. When she’s out of the game, we’re a different team.”

That’s because Christina certainly knows the position, as she’s been a point guard since youth ball in the third grade. The two sisters, who will play a lot one-on-one outside on the driveway, had never really played together until last year with the Cavs.

“It’s a cool experience,” Christina said. “We know each other well, so we can always predict what each other is going to do.”

Especially this year, with Christina playing a bigger role.

“I love it so much,” Joanna said. “This has definitely been by far my favorite season. It’s so amazing to see her develop as a player. And I really admire how good she is. It’s so great, because she knows me so well as a player. … We can almost read each other’s mind, like she said. I think that really shows on the court.”

And when they play one-on-one, Joanna watches for her sister’s moves.

“She’s very fast,” she said chuckling. “But I use my long arms to get back.”

Joanna likely won’t play basketball in college, since nursing is an extremely time consuming major. “She’s being very smart about that,” Murphy said.

Thus, if Friday is going to be her final game, Joanna wants it to be special, and what could be more special than winning a state title with her sister as a key teammate?