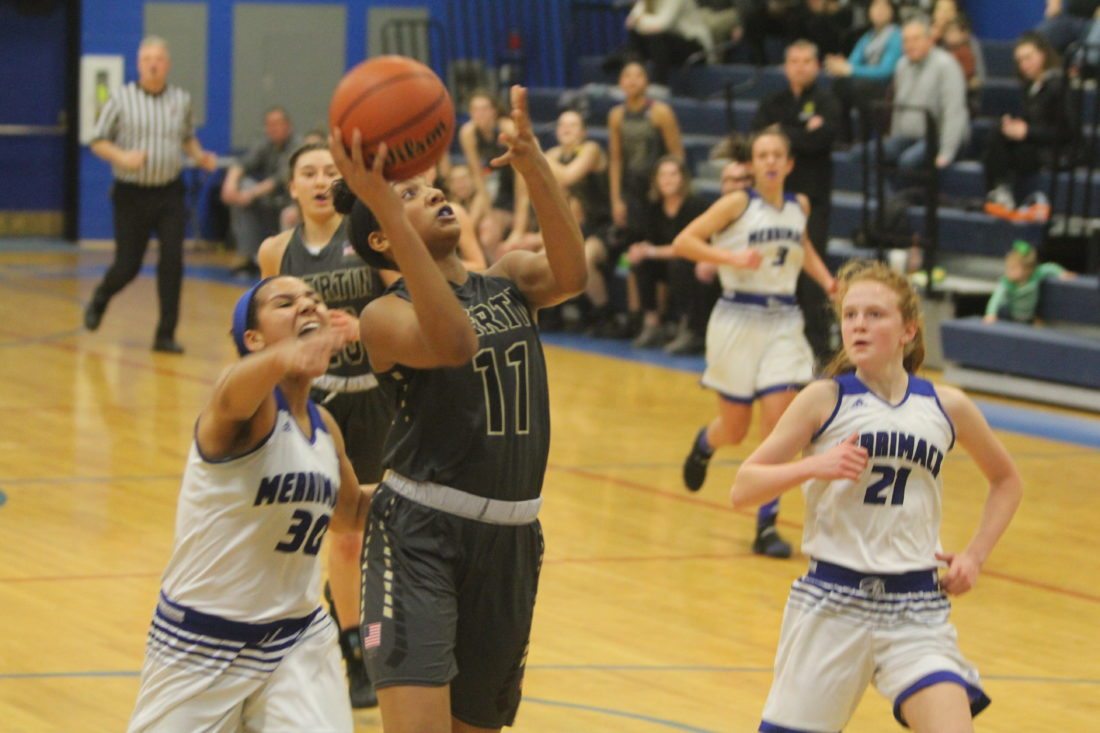 Staff photo by TOM KING Merrimack's Abby Yuan tries what she can to stop Bishop Guertin's Ava Owens from getting a clear layup during Saturday night's Division I quarterfinal in Merrimack.

MERRIMACK – The plan came together on Saturday night.

The theme all season for the Bishop Guertin High School girls basketball team was to play tough games against tough teams to make them tourney tough.

It seems like it worked, because the Cardinals survived one of the toughest in-state games they’ve had all season, escaping a gritty Merrimack High School team, 46-33 in the Divison I quarterfinals at the H. Dana Taylor Gym.

“That’s exactly what we told the kids at halftime,” Cardinals coach Brad Kreick said. “We played the schedule we played for exactly this reason. In the second half of a very tough game, on the road, a tough environment, you guys are going to know how to get it done. And they did just enough, they got it done.”

As a result, No 5 Guertin (15-5) will face No. 1, 19-0 Bedford in Thursday’s semifinals at Southern New Hampshire University, the Bulldogs escaping Salem 49-45 on Saturday.

But the Tomahawks (No. 4, 15-4) did their best to try to keep that from happening with tough defense against a Cardinal team that was missing its leading scorer, Erin Carney (ankle injury).

“Absolutely,” Merrimack coach Courtney Cheetham said. “Our defense all year is something we’ve hung our hat on. We battled, we knew what to expect. …

“There were a couple of swings there where we got a couple of offensive boards and couldn’t score off of it. And they take advantage of turnovers. … When we turned it over, they capitalized.”

Early on, the Tomahawks were especially tough. Theresa Twardosky’s putback at the buzzer gave the ‘Hawks a 9-8 lead after one, but a 6-0 run to end the second quarter gave Guertin an 18-15 lead at the half.

The Cards expanded that to as many as 10 in the third quarter, getting some separation on a Caroline Hoffer (11 points) 3-pointer keying an 8-1 Cardinal run. That was before a three-point play by the ‘Hawks’ Sabrina Johnson cut things to 28-21 going into the final eight minutes.

Still, the ‘Hawks, who were paced by eight points each by Twardosky and Sabrina Johnson, couldn’t get any closer. Hoffer and Hannah Muchemore, who had 12 points along with Addison Smith, sank key free throws down the stretch and BG froze the ball with about three minutes left.

“It’s always harder playing away,” Hoffer said. “They’re (Merrimack) a great team. At halftime, we just settled down, breathe, and we were ready to go in the third.”

Another BG key was Smith helping to make up for the scoring loss of Carney, who should be back for Thursday’s semis.

“Addi Smith was huge tonight,” Kreick said. “You can’t replace Erin, but I’m so proud of her. She missed about two months, battled all year long, and she deserved a game like that tonight.”

So did Merrimack, which hadn’t lost in two months, but had the unfortunate seeding in Guertin’s bracket.

“I’m extremely proud of our kids,” Cheetham said. “I think we had a remarkable season.”