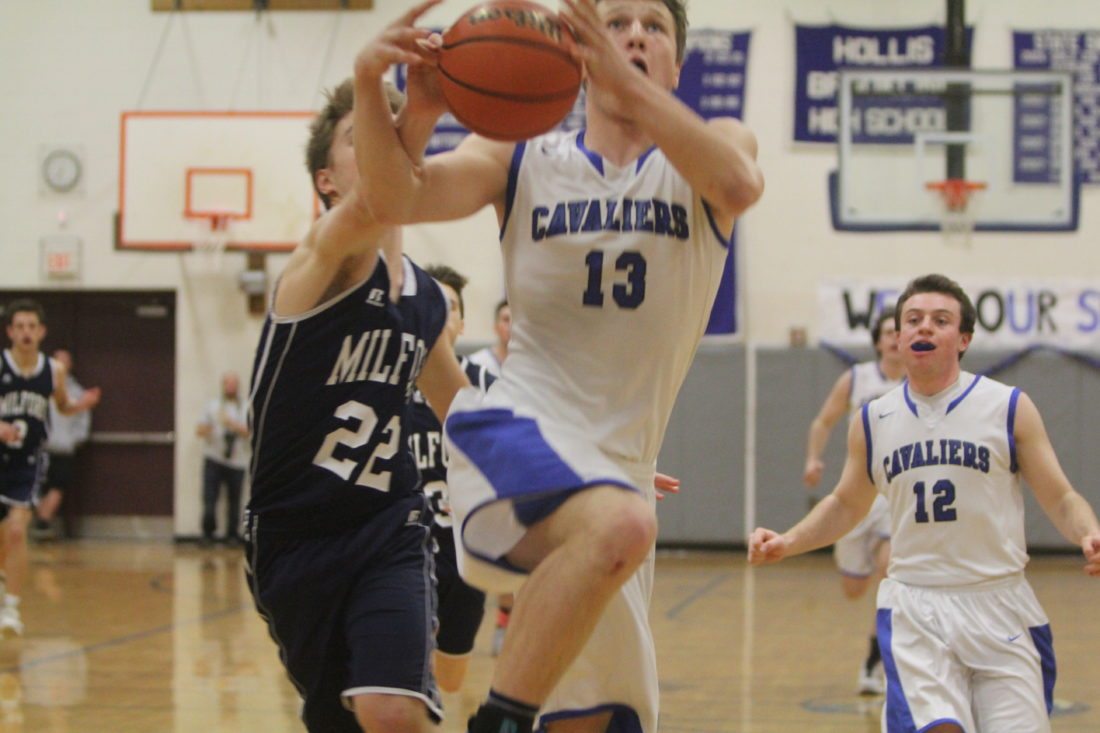 Staff photo by TOM KING Hollis Brookline's Matt Simco drives to the hoop despite the defensive efforts of Milford's Max Fortin during the Cavs' 53-48 win in Hollis on Thursday night.

The Cavaliers knew the Spartans of Milford would give them a fight and they did, the hosts eventually prevailing, 53-48, holding Milford to just five points in a fourth quarter – and zero over the final 4:55 – that began with the score deadlocked at 43.

“They were really battling us,” HB’s Matt Simco said. “We just got together in the huddle as a team and said that this is going to be our night.”

The Cavs and their fans hope it’s going to be their season, too, as they go into next week’s Division II tournament with a 16-2 record, riding a 12-game winning streak.

It looked a couple of times as if that streak might come to an end, as the Spartans had a couple of five-point advantages and led 48-46 thanks to a Jake Greska 3-pointer with 4:55 to play.

But shockingly, that would be it for 10-8 Milford’s scoring.

“They’re (Milford) a really tough matchup for us.”

But not tough enough, despite 16 points from Jamie Pare. But the Cavs’ trio of Matt Dowling (12 points) and Matt Simco (11) was too strong. Plus three key Spartan turnovers, and a big charging call, certainly helped the hosts, who could see the Spartans again if both survive the first round of the tourney.

“There were some tough calls down the stretch,” Milford coach Dan Murray said, his team also getting nine each from Gavin Urda and Jake Greska. “But we battled. We struggled a little bit offensively. They’re a real good defensive team. … It slipped away. They only had five fouls in the second half, we had about 15. It’s tough to battle that.”

“Thanks to our seniors, their work really paid off,” Etten said. “Once the playoffs start, seedings don’t matter. We’re going to focus on whatever’s next for us.”