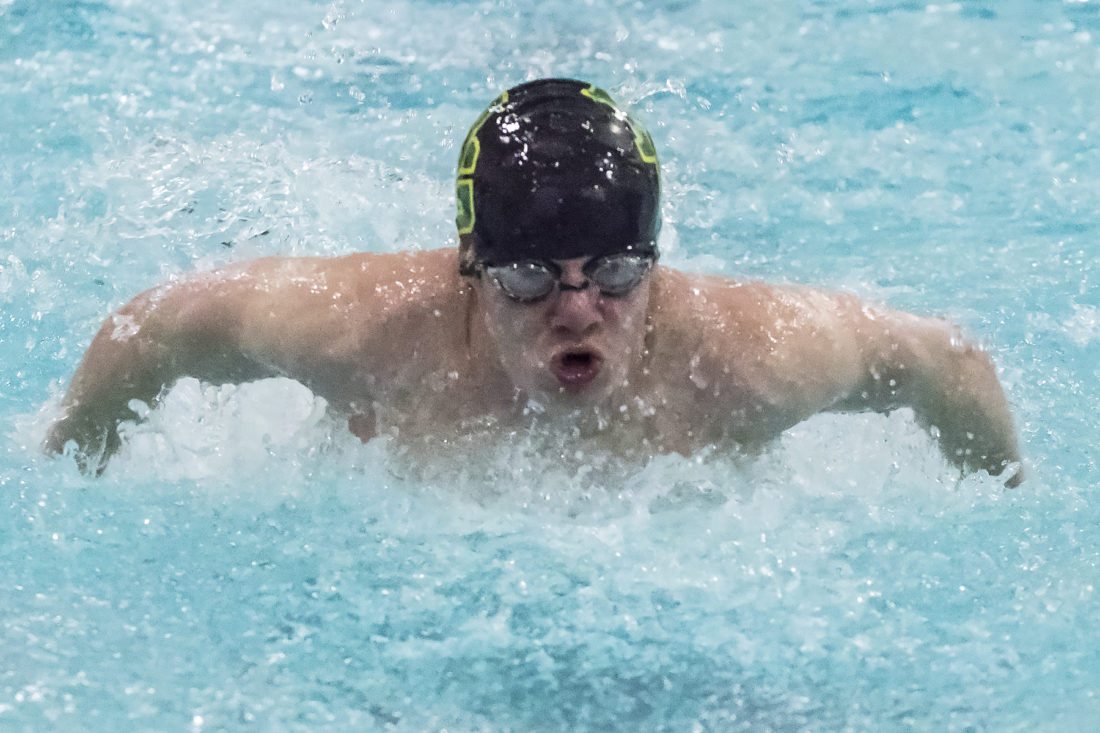 Telegraph File photo Mark Zoda is just one member of the Bishop Guertin swim team that needs a good showing for the Cards to perhaps take the Division I title on Saturday.

They’ve come close in the past, but is this the year for the Bishop Guertin High School boys swim team as they get set for Saturday’s Division I State Championship Meet at the University of New Hampshire?

These are some of the questions swimming and diving teams and their fans will have at end of the day on Saturday. The Division I boys and girls meet begins at 8:45 a.m. while Division II follows later in the day at 4:45 p.m. Diving takes place on Friday at 5:30 p.m.

The Cardinals, in the boys meet, certainly have a shot, with the stiffest competition coming from Exeter and Bedford. Guertin coach Christine Rousseau said the team, which finished second last year, has a winning formula all mapped out.

“The team has a goal of all the members placing no lower than fifth in the individual events and winning all the relays,” Rousseau said.

Guertin appears to be a bit deeper this season than a year ago. Senior Mark Zoda will be a key in the 50 free and 100 breastroke. Then the Cards look to Matt Lashua in the 200 IM, Matt Rantala in the 100 butterfly, John Puksta in the 100 free, Jack Januario in the 200 and 500 free and Aidan Daudier in the 100 backstroke. All are hoping to win those individual events.

All are either top seeds or close to it in their respective events, and the Cards are seeded No. 1 in two out of the three relays. No wonder they feel strongly about their chances.

“They need to stay focused, positive and rely on each other for some great swims,” Rousseau said.

Alvirne has a chance to make a little noise in the boys meet, led by senior diver Alex Elliott, senior Adam Banatwala (100 butterfly, 100 breast), and freshman Murray Reynolds (100 and 200 free). The Broncos are hoping to finish somewhere in the top eight.

In the girls meet, Nashu South could be a team to watch looking for a top five spot while again Exeter and Bedford look like the teams to beat

. But the Panthers are looking to have a solid showing with several top 10 seeds. They are ranked second in the second in 400 free and fourth in 200 medley relay. And keep these names in mind: Ava Rondeau (third girls 200 free) Payson Mooso (fourth 100 butterfly, eighth 200 IM) Haleigh Swabowicz (eighth 100 free), Hannah Swabowicz (ninth 50 free) and Lucina Yi (fourth 100 back)

As for Bomba, she has faces some competition, as she enters Friday’s diving as the second seed behind Bedford’s Aidan McGadden.

Other locals to watch: Broncos Jane Ostberg (50 free) and Emilenne Tarrant (100 back). Merrimack has star quality in Lauren Brennan, seeded first in the 500 free and seventh in the 200 free. Guertin’s Olivia Petropulos is seeded fourth in the 100 breast and eighth in the 50 free.

“The girls will be looking to contend in individual events and gaining experience for the future,” Rousseau said of her young team.

There aren’t any top title contenders among Souhegan, Hollis Brookline or Milford but a team that could finish in the top five may be the Souhegan girls. The favorites in both genders appear to be the likes of Oyster River, Hanover, perhaps Bow or Derryfield.

The Sabers could pick up valuable points if they can hold their top seed in the 200 medley relay and they’re seeded second in the 400 free. Individually, Tess White is ranked fourth in 200 yard free and fifth in the 100 free, while Geskos Bella is ranked seventh in the 200 IM.

Other area individuals to watch: Milford’s Alice Danas, ninth in 100 butterfly; Hollis Brookline’s Maya Ruvido, sixth 100 back and ninth in 100 free, and Campbell’s Kaitlyn Raikey, ranked sixth in the the 500 free.

The boys meet locally looks to be more of an individual thing.

Hollis Brookline’s Jamison Muckstadt looks like the top local, seeded sixth in the 100 free and seventh in the 50 free while the Cavs are seeded seventh in the 400 free relay. Cambpell’s William Bauer is ranked 10th in 100 back.

Saturday is also the day for the Gymnastics State Meet, also held at the University of New Hampshire with schools participating in morning (at 10) and afternoon (at 1) sessions.

This year, however, they do, giving Nichols some help as they will compete in Saturday’s afternoon session ranked fourth.. Keep an eye on her teammates, Sarah St. Lawrence and Katelyn Cadotte to provide some more team points. The challenge will be in trying to upend defending champion and tops seed Pinkerton and other contenders, including second-ranked Londonderry and No 3 Bedford..

A Nashua South gymnast to watch is Jenna Shea, as is Cambrea Pomeranz of Hollis Brookline.

On a night usually dominated by basketball, there’s a rare Friday local must-see hockey game, the first of two meetings this year between Bishop Guertin and Concord at 8 p.m. at Skate 3. It’s a makeup of a game that was postponed due to an ice storm on Dec. 23.

It’s the last game of what has been a tough stretch for Guertin, which is now 7-4-1, with losses in four of their last five games to Massachusetts teams Arlington Catholic, St. John’s Prep, and Malden Catholic, as well as title contender Hanover.

The Tide look like definite Division I title contenders as they enter Friday at 10-1, winners of seven in a row. They have given up as many as three goals in a game just four times in their 11 games. The two teams will meet again to end the regular season in Concord on Feb. 24. The Cards have a win over another contender, Bedford, but they could certainly use one more to boost their confidence. They also face Pinkerton (10-2) on the road on Feb. 21.

There’s also a rare Sunday matinee that is big for local girls basketball. Manchester Memorial, which was ranked second in Division I (12-1) going into Thursday night’s huge game vs. No. 1 unbeaten Bedford, will host Bishop Guertin at 2:30 p.m.

The Cards go into Friday’s game at Dover at 9-5, but remember, all but one of those losses is out of state. Guertin’s other big regular season game will be its finale on Feb. 23 at home vs. Pinkerton.