Mercy Tigers swarm all over Cards in 56-48 win 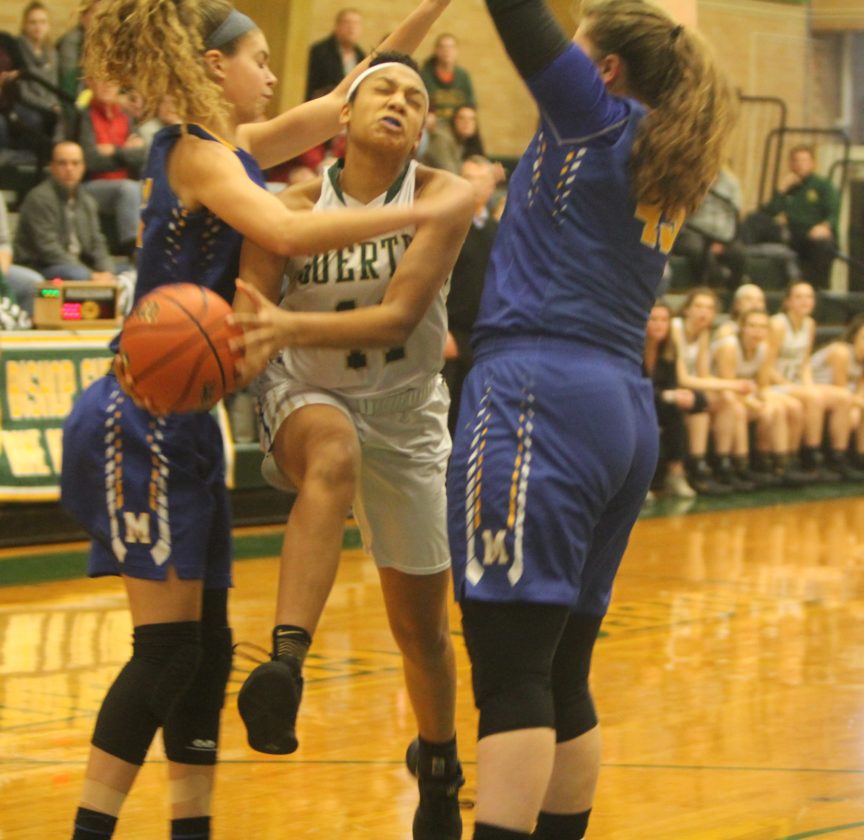 Staff photo by TOM KING Bishop Guertin's Ava Owens tries to push through the defense of Mercy's Isabella Santoro, left, and Meghan DeVille during the Cards' 56-48 loss at Guertin on Saturday.

NASHUA – The first thing you noticed about the Mercy High School girls basketball team was the fact they travel in style, with a nice coach bus suitable for a college or pro team parked outside Bishop Guertin High School on Saturday afternoon

“Once a year, just once a year,” Tigers coach Tim Kohs said.

The second, of course, is the Tigers’ size and talent, and the third is their intense defense. It was all evident in the Middletown, Conn.private school’s 56-48 win over the Cardinals at the Colligadome on Saturday afternoon.

Still, Bishop Guertin coach Brad Kreick noticed something else: his 7-5 team’s grit in a tough loss.

“I tell you, I could not possibly be more proud of how they played today,” Kreick said. “One of the things that’s hurt us all year long is being consistent for four quarters against good teams. Our kids played for four quarters as hard as they could possibly play. They really grew up a lot today, whether people realize it or not. That’s (Mercy) one of the top two or three teams in New England right there.”

Well, at least Connecticut’s top ranked team, and deservedly so with a 14-0 record. Guertin played the Tigers the closest an opposing team had all year. For example, the other night they enjoyed a 58 point win.

But it was Guertin that got off to a great start in this one, leading 7-0 and 10-2. After seeing the Cards’ Ava Owens breeze to the basket nearly uncontested, Kohs called time out, and turned about three shades of red in loudly telling his team to pick up its defense. It worked. Guertin led 17-16 after one thanks to a buzzer beater by Bri Wilcox, but scored only one point – an Aria O’Connell free throw with 2:08 left in the half – the entire second quarter. Erin Carney, who had a team high 17 points, ended the field goal drought with a layup 10 seconds into the second half. That’s 8:10 without a field goal for the Cards, if you’re counting. Rare indeed.

“I think when I called (the timeout), they had 15, and they ended up with 18 in the half, so it was just three in 10 minutes,” Kohs said. “That’s a good team. You have to guard every kid; they can all shoot it, they can all put it on the floor.

“I don’t think we got tentative,” Kreick said of his team’s second period offense. “I think that’s just a very good basketball team. We got out of our rhythm a little bit.”

Mercy had two players that really made a difference – point guard Isabella Santoro, who led all scorers with 20, and six-foot center Meghan DeVille, who ended up with 17 but you had the idea she might have been able to get more as Guertin had no answer for her down low.

“You can’t guard her,” Kohs said. “I don’t know what she scored, but she should’ve had 10 more, she missed four or five.”

The Cards went back to attacking the basket a little bit more in the second half, cutting the Tigers’ lead to five on a Carney layup with 3:58 left in the third period. But that’s as close as they would get, as it was 44-32 after three.

Besides Carney, Caroline Hoffer had 11 points and Wilcox eight. But Guertin went just 8 of 17 from the line, which hurt. As Kreick said, “Lesson learned.”

He’s hoping the Cards have learned a lot of lessons from their four out-of-state losses. They still have a few tough in-state games remaining on their schedule, including vs. current unbeaten Manchester Memorial and contender Pinkerton.

“One of the things we’ve been trying to do all year long with these out of state games,” Kreick said, “as tough as they’ve been – we weren’t sure when it was going to happen – but our kids found themselves today.

“They’re bummed out they lost a game, and I understand that. But we’re going to take a heckuv a lot out of this game that’s going to really serve us well come February and March.”