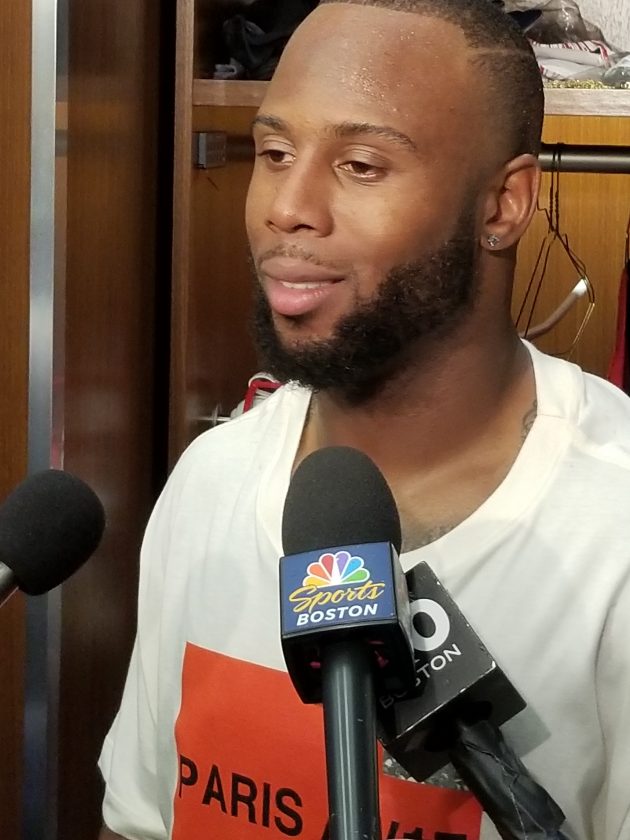 Telegraph photo by TOM KING James White says the Patriots will give every effort to adjust to life without Tom Brady.

Sure, not having Tom Brady around will be a huge adjustment for the New England Patriots – especially running back James White.

But he says he’ll get over it, like the rest of the team. No choice, really.

But, said White, the Patriots will adjust.

“Guys come and go each year and every year, so you have to be able to compete with new people,” said the veteran captain, who has been working out at home in Florida during the pandemic. “We’re confident in (Jarrett) Stidham, we’re confident in (Brian) Hoyer, whoever it happens to be. Whenever we can get back out there with things, we’re going to work on building.”

White said his impression of Stidham last year was a good one, not just from preseason but from practices throughout the regular season.

“He came in and competed right away,” he said. “Our offense can be pretty complex. He’s willing to learn, willing to take the coching and he keeps fighting no matter what the situation is.

“His second year, he’ll come in ready to learn, we’ll all compete, trying to make each other better football players, get on the same page on offense and help each other out.”

White speaks from experience. He didn’t do much his rookie year – just five catches for 23 yards — but that changed dramatically as he had 40 receptions for 410 yards in his second season in 2015.

White doesn’t feel pressure as a pass-catching back, with someone different throwing the passes.

“No, there’s no added pressure,” he said. “We all want to be reliable options. It’s not going to be one group or one person that makes a team win; it’s going to be everybody working together and getting things going.”

And thus, White says the Patriots will continue to shoot high.

“Expectations don’t change,” White said. “As soon as ou step into that building, you’re expected to compete at a high level, be dependable, be a great teamate.

“For us, as leaders, as captains, it’s to string the new guys along, the younger guys along, make sure they’re competing, learning. … You know, this is a ‘What have you done for me lately’ league, so you have to come back in and restart over.”

Hopefully, the Patriots will be able to start over soon. But with a potentially shortened off-season due to the pandemic, White says that means extra work is ahead at some point.

“Maybe staying after practice a little bit more, doing stuff before practice, competing with each other,” he said. “Whatever it takes so you can have your best performances when you go out there.”

White was thrilled to see that Patriots owner Robert Kraft sent the Patriots team plane to China to procur at least a million N95 masks to each the medical shortages in the region.

“It’s awesome,” White said. “That’s huge at this point in time. You have doctors, nurses, all those people on the front lines taking care of sick people each and every day. It’s a crazy situation right now.”

“People that have the influence to help others, I think it’s an important time to help as many people as possible,” White said. “Especially those who are sick, there’s some people getting laid off, don’t know when a check is coming, or if they’re getting a check, or when their next meal is coming. It’s a difficult time.”

The Patriots the other day released veteran backup Cody Kessler, who was the third string quarterback and never saw the field except for practice. The move saves a small bit of change on the salary cap, and the Patriots could certainly bring him back at some point, like they did during the season last year after a sign and then release.