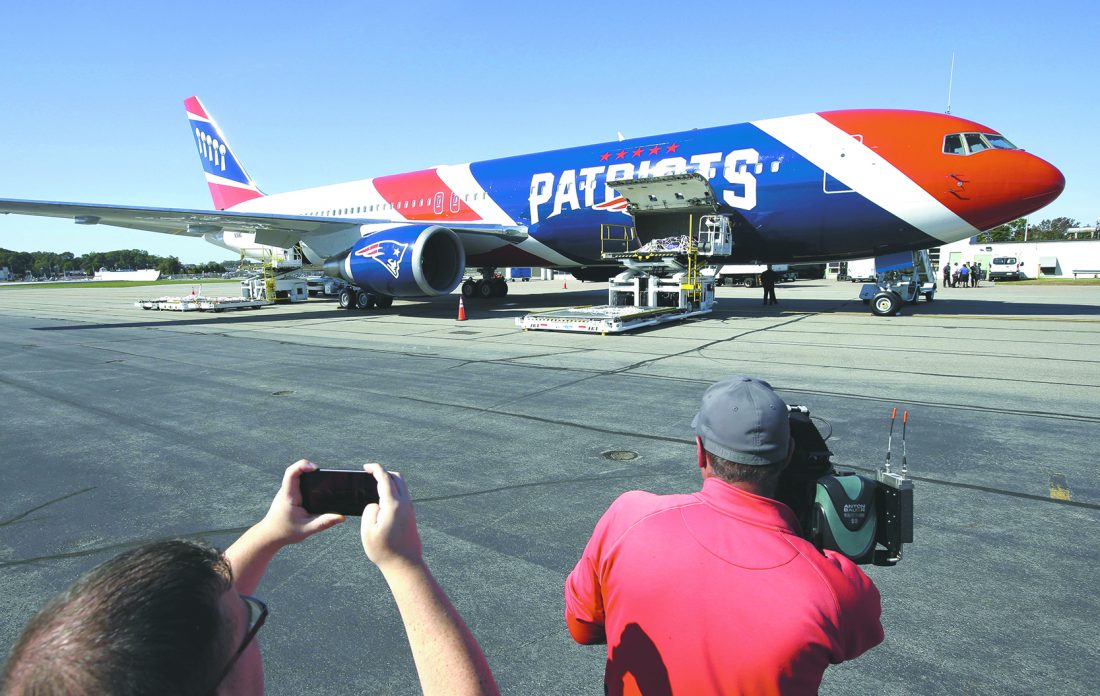 FILE - In this Oct. 4, 2017, file photo, the New England Patriots customized Boeing 767 jet rests on the tarmac at T.F. Green Airport, in Warwick, R.I. The Patriots private team plane is expected to land in Boston on Thursday, April 2, 2020, returning from China with more than one million masks to help control the spread of the coronavirus. The new coronavirus causes mild or moderate symptoms for most people, but for some, especially older adults and people with existing health problems, it can cause more severe illness or death. (AP Photo/Steven Senne, File)

BOSTON (AP) – Massachusetts Gov. Charlie Baker found himself in need of an assist to help the state fight the coronavirus pandemic.

He called on the New England Patriots.

The team’s private plane was on schedule to return to Boston from China on Thursday evening carrying more than one million masks critical to health care providers fighting to control the spread of the virus..

Baker secured the N95 masks from Chinese manufacturers but had no way of getting them to the U.S. He reached out to Patriots team owner Robert Kraft, who loaned the Boeing 767 painted in the team’s colors and logo that is usually used to carry the team to and from NFL games.

Baker confirmed the joint venture in a news conference Thursday.

“The Krafts were terrific,” the Republican governor said. “They were a phone call away and immediately went to work on the logistics associated with this and did not stop until they could make it happen. This was a total team effort on every level.”

Kraft Sports and Entertainment chief operating officer Jim Nolan said in an interview on Patriots.com radio that the Chinese government didn’t officially sign off on the trip until March 27. Nolan said the hurdles included legal logistics that were only cleared thanks to cooperation involving multiple state, U.S. and international entities.

Chinese technology company Tencent was a huge help in the process, Nolan said. It agreed to gather the masks, got them through the inspection process, stayed with them to ensure their security and eventually their movement on to the Patriots’ plane.

“This isn’t in their wheelhouse, but they thought it was the right thing to do,” Nolan said.

There was little margin for error once the airplane arrived in China, which granted the Patriots three hours to fill the plane with the masks. They were on the ground for 2 hours, 57 minutes according to flight tracker data Nolan monitored.

Tencent looked after approximately 1.7 million masks. The Patriots’ plane took on 1.2 million, Nolan said. They are working with Tencent to bring additional equipment back from China via a cargo plane

The masks will be going into Massachusetts’ stockpile for distribution to medical personnel.

Nolan said 300,000 of the masks will also be going to New York to help medical personnel there. Baker said Rhode Island will also receive some of the masks.

Patriots running back James White said in a conference call Thursday that he wasn’t surprised Kraft stepped up to help.

“As soon as you step into the building, you see how much the Kraft family does helping out not only the Boston community but the community across the world and it makes you want to help others,” White said.