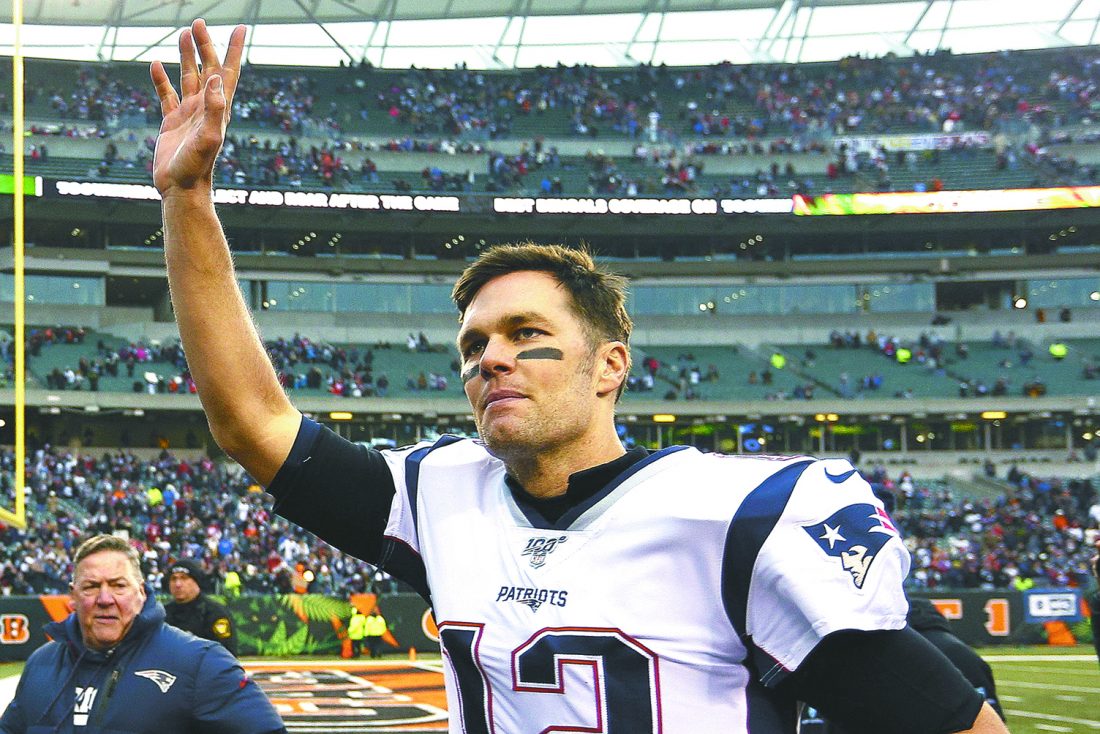 FILE - In this Dec. 15, 2019, file photo, New England Patriots quarterback Tom Brady waves to the crowd after an NFL football game against the Cincinnati Bengals in Cincinnati. The Miami Dolphins signed seven potential starters, but none will help their chances of overtaking the New England Patriots in the AFC East as much as Tom Brady did by bolting from Boston for Tampa Bay. (AP Photo/Frank Victores, File)

MIAMI (AP) – The biggest free agent deal for the Miami Dolphins this offseason has been one they didn’t make.

The Dolphins spent more than $237 million last month and signed seven potential starters. But none will help their chances of overtaking the Patriots in the AFC East as much as Tom Brady did by bolting from New England to Tampa Bay.

The 6-foot-4 Brady loomed large in the division for two decades, dominating the Dolphins and the other perennial also-rans, the Buffalo Bills and New York Jets.

And now he’s gone. This is no April Fool’s joke: Just like Elvis has left building, Tom has left the division – the entire conference, in fact.

The Dolphins, Bills and Jets sure hope so. Each is eager to seize center stage.

The Patriots have won the division 17 times in the 19 seasons since Brady became their starting quarterback. The exceptions were 2002, when the Jets finished first with a 9-7 record, and 2008, when Brady suffered a season-ending knee injury injury in Week 1 and Miami took the division title.

The Bills and Dolphins haven’t won a postseason game since Brady made his first career start in 2001. The Jets haven’t been to the playoffs since the 2010 season.

So what do they think about playing in a division without the three-time NFL MVP.

“Ha, ha. I mean, I’m not going to frown about it, you know?” Bills safety Jordan Poyer said. “He has been there for 20 years, and it’s going to be different faces in the East now. Whoever wants it is just going to go get it. Obviously with Tom Brady gone, that’s a huge, huge deal.”

“Pretty crazy to not imagine him as a Patriot,” said Buffalo Sabres captain Jack Eichel, who grew up in the Boston area a Patriots fan. “But hey, go Bills. Go Bucs.”

Even during a pandemic, Brady’s uniform switch was front-page news, with lots of subsequent talk that the Patriots are now “just another team.”

“Especially now, you have a lot of time to be on Twitter and stuff, so a lot of what I’ve seen is just people tweeting me like, ‘Enjoy what you guys had, it’s over, you guys won’t win a game,'” New England safety Devin McCourty said.

“I think that’s natural, though. I think if I was a fan and I watched the team and watched a guy for a long time and he left and he was so great, I would say that team is going to be terrible, too. That’s expected.”

The 2020 Patriots probably likely won’t be terrible — after all, they still have Bill Belichick. But they do need a quarterback, with Jarrett Stidham, Cody Kessler and Brian Hoyer the choices on the current roster.

None is likely to remind fans of Steve Young, the Pro Football Hall of Famer who succeeded Hall of Famer Joe Montana in San Francisco a generation ago. (Fun fact: Brady fondly recalls sitting in the stands as a teenager to watch Montana’s last game with the 49ers at Candlestick Park.)

So who’s the best quarterback in the AFC East now? While Belichick must replace perhaps the greatest of all time, the Bills believe they have a franchise QB in Josh Allen. Ditto the Jets with Sam Darnold. The Dolphins, with the fifth pick in the draft and three selections in the first round, hope to land a keeper at QB this month.

“It’s a new season,” said Ted Karras, a former Patriots center who signed last month with Miami. “We’ve got as good of a shot as anybody else in the division.”

Not necessarily. The team that appears closest to overtaking New England is the Bills, who went 10-7 last season, their best record since 1999. They have a sense of stability for a change with Sean McDermott entering his fourth year as coach, and they’re especially eager to embrace this new era in the AFC East after going 3-32 against Brady.

The Dolphins are rebuilding under second-year coach Brian Flores, who used a league-record 84 players last season and miraculously won five games. Heavy roster turnover will likely continue for at least another year, and Flores’ long-term fate rests largely on who Miami drafts at QB.

The Jets also remain a work in progress under general manager Joe Douglas, who is in his first full offseason, and second-year coach Adam Gase. They need a left tackle, a go-to receiver and — most of all — further development by Darnold.

The Patriots, meanwhile, have been hit hard in free agency, and not just at quarterback. Among those departing was linebacker Kyle Van Noy, who split for Miami but tapped the brakes on the notion the Patriots have fallen out of the mix in the East.

“They’ll always be the Patriots, with the kind of players they have up there,” Van Noy said. “They still have a really good set of football players up there that love football, that are going to be hungry to prove to a lot of people that they’re still in it.”

The Dolphins, Jets and Bills still have to play New England twice a year. But they don’t have to play against Brady in 2020 — at least not until the Super Bowl. He’s the NFC South’s problem now.