The Tom Brady Watch is officially over as he joins Tampa 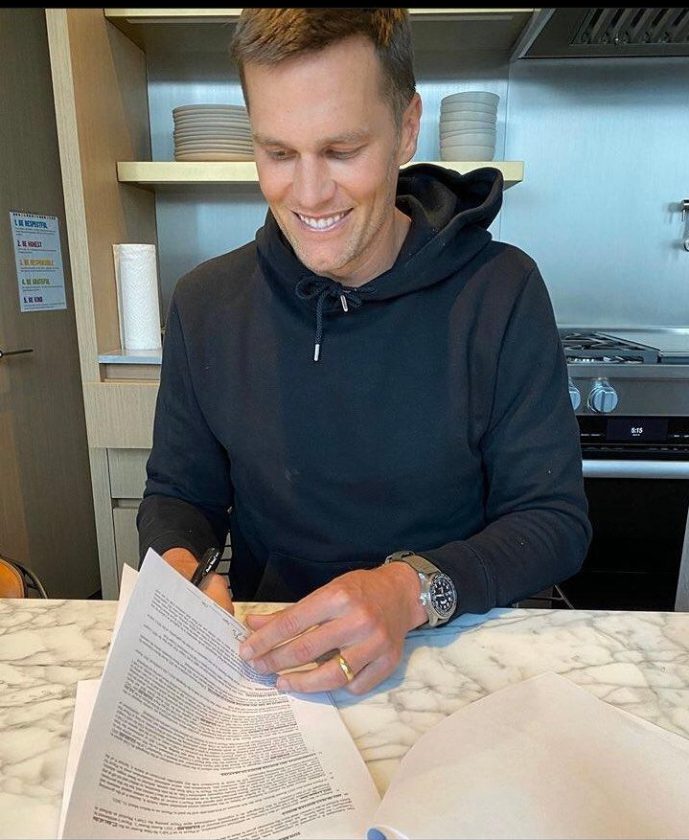 Instagram photo Tom Brady posted this photo of him signing a Tampa Bay contract this morning.

The Tom Brady Watch, which began in New England and went all the way down the east coast to Tampa, is over.

Brady is officially a Buccaneer, as he signed a two-year deal worth $50 million guaranteed ($25 million per), with another $9 million in incentives ($4.5 million per). Brady cannot have a franchise or transition tag placed on him and also has a no-trade clause.

With no tags allowed after two seasons, Brady is possibly leaving open the opportunity that he’ll want to play more than two more years. He has said he wants to play until he’s 45, and he would be 45 in August of 2022.

The incentives reportedly break down as follows: Up to $2.25 million for finishing in top five in passer rating, passing TDs, passing yardage, completion percentage, and yards per attempt.

His base salary is reportedly $15 million each year with a guaranteed $10 million roster bonus each year as well.

Both Brady and the Bucs made the deal official Friday morning. First, Brady posted on social media a photo of him signing what is believed to be his deal, and issued a statement that read as follows:

“Excited, humble and hungry,” Brady wrote on social media. “…If there is one thing I have learned about football, it’s that nobody cares what you did last year or the year before that. … You earn the trust and respect of those around through your commitment every single day.”

Then came the words that have to cut like a knife through the hearts of Patriots fans, despite the fact this was highly expected after he said he wasn’t coming back to New England earlier this week.

“I’m starting a new football journey and thankful for the @buccaneers for giving me an opportunity to do what I love to do,” the statement continued. “I look forward to meeting all of my new teammates and coches and proving to them that they can believe and trust in me. … I have always believed that well done is better than well said, so I’m not gonna say much more – I’m just gonna get to work! #Year 1.”

A little while later Friday morning, the Bucs announced the signing on their team website with a long story.

“Tom is a proven champion who has achieved greatness on the field because he demands the best out of himself and his teammates,” Bucs general manager Jason Licht said in the announcement article. “I’ve known Tom since we drafted him in New England 20 years ago and through this process it became very clear that his desire to be a champion burns as strong today as it ever has.

“He possesses the type of rare natural leadership qualities that will immediately impact our entire organization.”

Licht, by the way, he was the Pats assistant director of player personnel in 2002 and a college scout/national scout for them for a couple of years prior to that, including when Brady was drafted in 2000.

Brady last year threw 24 TDs and eight interceptions, but his last toss as a Patriot was a pick six by then-Tennessee (and former Patriot) defensive back Logan Ryan at the end of the Patriots’ Wild Card playoff loss to the Titans.

In Tampa he’ll replace Jameis Winston, another free agent, who had a career year in two different ways. Winston threw for a whopping5,109 yards (Brady threw for 4,057) and 33 TDs, but also 30 interceptions, seven returned for TDs.

The Bucs went after Brady hard as soon as the legal tampering period began on Monday, perhaps the final impetus for Brady to meet in person with Patriots owner Robert Kraft on Monday night to tell him he was leaving the team.

“Tom is the most successful quarterback in the history of our league,” Arians said in an article on buccaneers.com, “but what makes him so special is his ability to make those around him better.

“I have had the privilege to work with some of the best passers in our game, and the characteristics they all possessed were the ability to lead and get the best out of their teammates. Tom is no different. He is a proven winner who will provide the leadership, accountability and work ethic necessary to lead us to our goal of winning another chamionship.”

Meanwhile, Patriots players took to social media to express their gratitude to Brady for what he did for them while in a Patriots uniform.

“I saw how how TB worked every day in practice and prepared every day to be the great player he is,” Patriots standout corner Stephon Gilmore said in a tweet, addressing Brady. “I applied that to myself and that’s why I’ve become the player I am til this day. Thanks for showing me how to be great and staty great each and every day. It was a pleasure to suit up with you during my career.”

The Patriots on Friday did make an addition, signing former Packers fullback Danny Vitale. The six-foot, 239 pound Vitale’s signing could be a sign that James Develin’s return from season ending neck surgery isn’t a certainty. Vitale has played a combined 44 games with the Packers and Browns.

In keeping the theme with Patriot departures, Patriots linebacker Elandon Roberts tweeted out a short video in which he said hello to Miami Dolphins fans, as he left New England for Miami this week.

Another former Patriot and new Dolphin Kyle Van Noy said on twitter, “It’s official! Can’t wait to get it rocking at the Hard Rock Stadium.”

The Patriots announced on Friday that they have made all the games currently available from all six versions of their “Three Games to Glory” anthology on demand on patriots.com and will also do so on their YouTube channel starting on Monday.