In the end, Patriots made a hard long-term decision 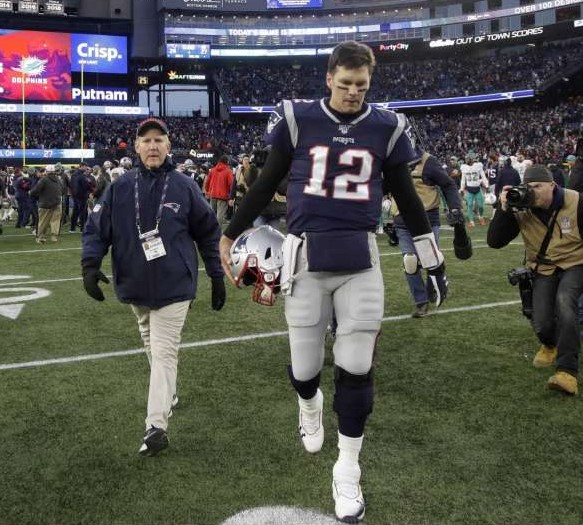 AP photo In the end, the Patriots allowed Tom Brady to leave for the best in the long-term.

As legend has it, Tom Brady brazenly told Robert Kraft in his rookie season that drafting him was “the best decision this organization ever made.”

Was allowing Brady to leave 20 years later the worst?

Only time will tell us that.

In some ways it is, but that is mainly because of appearance sake. The Patriots appear to have made Tom Brady’s decision for him by not negotiating with him to come up with a deal to keep him a Patriot for the remainder of his career. Patriots owner Robert Kraft, with whom Brady reportedly met for hours on Monday night, did not step in to overrule his head coach, Bill Belichick. Belichick wanted to offer Brady, according to reports, a one-year deal for less than the $23 million he got last year. Brady certainly could get more than that on the open market and will.

In other ways, the decision is one the Patriots may have needed to make. Brady will turn 43 in August, showed last year he is not the same quarterback he was even two years ago when he lost a Super Bowl despite posting record numbers.

This isn’t new for Belichick,who let the popular Bernie Kosar go in favor of Vinney Testaverde in Cleveland back in 1993. And, of course, remember, Belichick made the same type of decision with Brady, jettisoning Drew Bledsoe about a year after Bledsoe had signed a big long-term deal with New England. Of course, back then there was visual evidence that Brady was a winner, with a Super Bowl title. However, there was talk in team circles that before Bledsoe had unfortunately gotten seriously hurt in the Jets game in 2001 that Brady had already proven in practice he was the best quarterback on the team.

And now Belichick, who M.O.is to make every decision “in the best interest of the football team” will do whatever he feels he needs to win.

Does that mean that now second-year QB Jarrett Stidham is better suited in Belichick’s mind to help the Patriots win more than Brady?

Not necessarily. But what Belichick felt wouldn’t help the Patriots win was tying up big money in a quarterback when the wealth could be spread. As it is, Brady leaves a $13.50 dead cap hit, more or less his parting gift. Remember, the Patriots could have avoided that by signing him before today at 4 p.m. Instead, he’ll most likely be a Tampa Bay Buccaneer.

The end wasn’t the romantic ending the fans and even Kraft may have wanted. The Patriots are taking a huge gamble, and will now need leadership in the locker room – one of the main reasons they re-signed older veterans Matthew Slater and Devin McCourty for special teams and defense, and now that responsibility will fall on Julian Edelman on offense.

Kraft’s simple claim is that Brady wanted to leave. But why? We can say it’s because he was tired of Belichick, we can say it’s because he wasn’t offered a contract he felt he deserved (there was one report he did indeed receive a two-year, $25 million per last summer but no word on the guaranteed dollars). Kraft’s words, unfortunately, still can’t be taken at face value.

The Patriots are all about winning, and it will be hard to convince many that they can win without Brady, but at some point, they had to find out. They will no doubt be on the lookout for a veteran quarterback to provide a safety net if indeed they want Stidham to get the job – or at the very least push the second-year player.

Former Titans QB Marcus Mariota would have been a good choice, but he will serve that role in Las Vegas after agreeing to a deal there.

That the Patriots didn’t hold any talks with Brady during the off-season suggests that Belichick did have a succession plan – though likely not as good as he had with former favorite son Jimmy Garoppolo. The Garoppolo issue was forced because of the fact he would be a free agent and not take a smaller contract to sit and wait, not because of some owner mandate.

What Kraft said was true when he said he wanted Brady to finish his career in New England: “Unfortunately,” a line in his statement read, “the two sides were unable to reach an agreement to allow that dream to become a reality.”

The Patriots know in the short-term it was better to keep Brady. They knew in the long-term the best thing was to turn the page.

The long-term, and Bill Belichick, won out, as difficult it is to grasp.