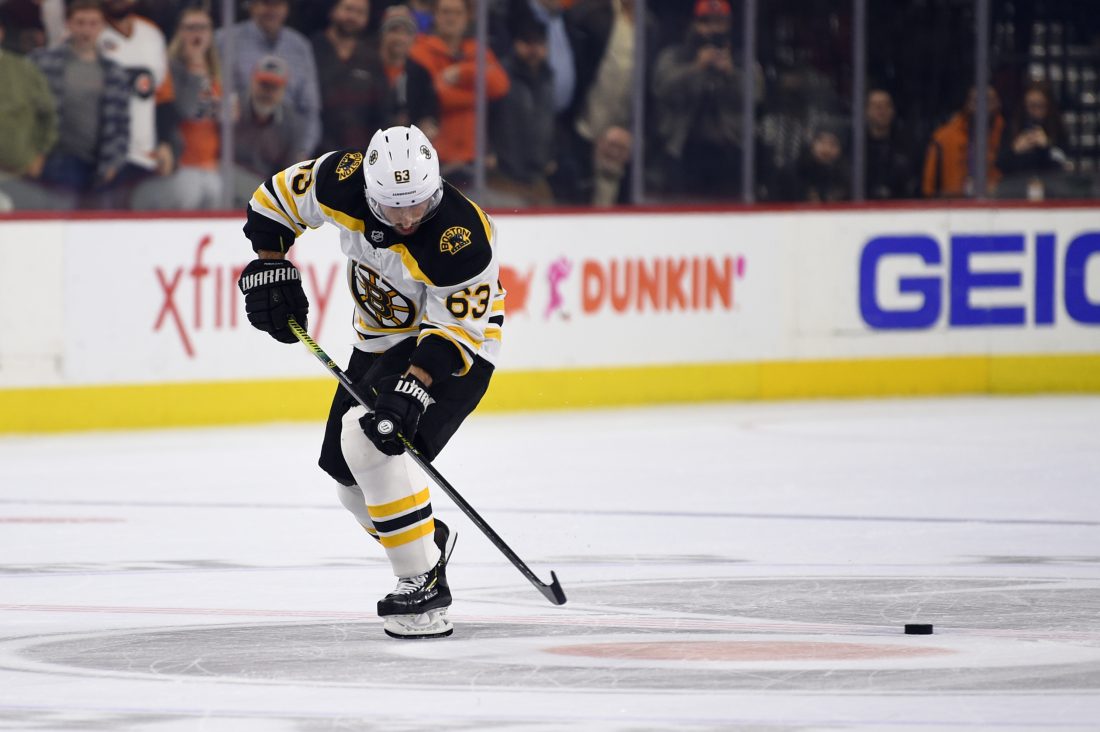 Boston Bruins' Brad Marchand skates by the puck on a shootout attempt in an NHL hockey game against the Philadelphia Flyers, Monday, Jan. 13, 2020, in Philadelphia. The Flyers won 6-5. (AP Photo/Derik Hamilton)

Travis Konecny scored in the fifth round of the shootout for Philadelphia, and Marchand lined up for his turn needing to score to keep the game going. The two-time All-Star charged toward the resting puck but barely nipped it as he skated past. Officials met briefly before signaling that the game was over. Because Marchand made contact with the puck, it was considered a shot attempt.

Travis Sanheim scored twice in regulation for the Flyers, who rallied from a three-goal deficit.

Sean Couturier, Connor Bunnaman and Kevin Hayes also scored in regulation for the Flyers, who were down 5-2 with 12½ minutes left in the second period. Philadelphia improved to 15-3-4 at home.

David Krejci had two goals and Anders Bjork, Charlie Coyle and David Pastrnak also scored for the Bruins, who entered tied with Washington at St. Louis for most points in the NHL. Boston gained a point but fell to 0-7 in shootouts.

The Flyers had the best opportunity in the five-minute overtime when Ivan Provorov was right on the doorstep, but Jaroslav Halak extended his right pad for a stellar save just before the buzzer sounded.

Sanheim got his second of the game by following his own miss to tie it at 5 with 7:02 left in the third period during a 4-on-4.

The teams combined for six goals in an entertaining second period.

Boston looked in position for a blowout after Krejci’s second of the night made it 5-2. The Flyers answered with the final two goals of the second.

Couturier pulled Philadelphia within 5-3 with 6:48 left in the period when he lost control of the puck near the crease and it slid under Halak’s glove. Connor Bunnaman, called up on Sunday from Lehigh Valley of the AHL, was credited with his first career goal when Mark Friedman’s shot from the point hit him and two Bruins defensemen before going into the net. It was Friedman’s first career assist.

Pastrnak notched his NHL-leading 36th goal on a backhander through Carter Hart’s legs to open the second-period scoring.

Krejci scored his 10th of the season to make it 2-0 with 3:11 left in the first, finishing a beautiful tic-tac-toe passing play with a one-timer from just inside the post to extend Boston’s club-record streak with a power-play tally to 14 consecutive games.

Hayes pulled the Flyers within a goal with a one-timer from the right circle on a power play with 1:38 left in the first to snap Philadelphia’s 0-for-11 skid on the man-advantage.

NOTES: Halak stopped 34 shots and Hart made 26 saves. … D Zdeno Chara played in his 1,000th game as a Bruin, becoming the sixth player in club history to reach the mark. He joined Ray Bourque, Johnny Bucyk, Patrice Bergeron, Don Sweeney and Wayne Cashman. Overall, it was the 1,5030th game of Chara’s career. … The teams will wrap up the three-game season series March 10 in Philadelphia. … Philadelphia improved to 5-5 in shootouts. … Couturier had two assists for a three-point night.

Bruins: At Columbus on Tuesday night.